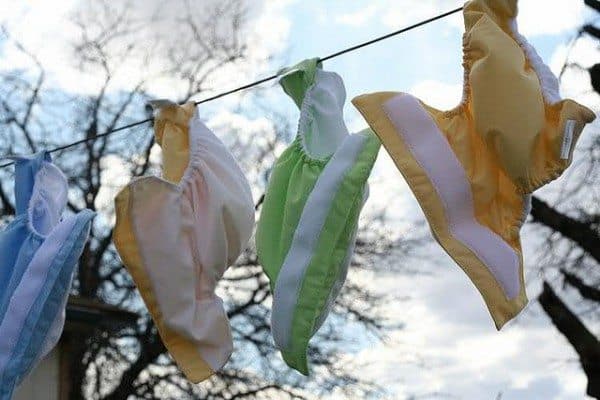 So I read pretty much every post you ever wrote on cloth diapering, and I’m in love with the idea for our 3rd child, due in August. But..you know. Just the idea, at this point. I haven’t really looked into the cost of diaper services around Philly, but I know that personally, I am bad at laundry. I am REALLY bad at laundry. It piles up on the best of days. With a newborn and a 7 year old and a husband AND cloth diapers…I just don’t know. But as I mull it over, one of the other issues that comes to mind is the family…

My husband’s parents and aunts are going to be clamoring over this child. Especially his parents. They are super helpful, and with our last child, they respected all our wishes about basic care. But I worry about the concept of cloth diapering with them. They’re not super old fashioned, but old fashioned enough that a lot of the newer “hippie” stuff just seems overbearing to them. And his dad is seriously one of your stereotypical grandpas – super fun and loving and awesome, but kind of oblivious when it comes to general child care. So to make a long question slightly less long, I’ll get to the point – I know your parents and Jason’s parents are all in my area (Philly-ish) and probably don’t do a whole lot of babysitting, but when they do…how did the cloth diaper thing go over with them? Did they call you dirty hippies? Did they roll their eyes a lot?

Any advice for dealing with the masses of assvice givers and whatnot?

First, on the laundry topic. I am not exaggerating when I say that I am really, truly terrible with laundry. I HATE LAUNDRY. I hate lugging it downstairs, I hate folding and ironing and putting stuff away. But cloth diaper laundry…it’s different. Part of it is surely the whole you-have-no-choice aspect of it — either you make sure your kid has diapers available or you’re left MacGuyvering a burp rag and a swim diaper during the rinse cycle.

But I really have never viewed it on the same level as regular-clothes laundry. I don’t know how to explain why it’s different, but it is. Our main diaper pail is two feet away from our washing machine. We have a small interim one with a handle at the top of the basement steps, where we toss diapers during the day and then make a trip downstairs whenever it’s convenient. I dump the contents into the wash and turn on the soak cycle before bed. My husband adds the detergent and starts the wash cycle the next morning when he’s downstairs ironing a shirt or fetching boxer shorts from a giant unfolded pile that we’ve been ignoring for days. I put them in the dryer at some point, then carry them upstairs and either stuff the inserts while watching TV or just toss them all back in the drawer unstuffed, because it really only takes about 10 seconds to perform an on-demand stuffing when I need to. It’s now just part of the rhythm of our crazy life, along with a ton of other chores/tasks that I don’t particularly LOVE, but are just part of raising and wrangling a household of kids who need you to sack up and be the responsible grown-up from time to time.

We’ve gotten just about every reaction you can imagine about our choice to switch to cloth diapers — shocked, confused, enthusiastic, admiring, patronizing…to downright judge-y and rude.

My in-laws are pretty crunchy and eco-minded, and are very big proponents of “natural” living, so they are more than fine with the cloth diapers. They were definitely a little nervous about them at first, because there really is this huge misconception that cloth diapering is so hard and so different and disposables represent the Greatest Technological Advancement In Baby Waste Management Since Indoor Plumbing, but that’s a misconception that MOST people quickly get over, especially when you’re using pockets or all-in-ones or anything other than pins and plastic pants. Today, my in-laws are cloth diaper pros, and never bat an eye about washing them when we’re visiting or ask them to babysit for overnight/extended trips. They visited this weekend and caught a glimpse of my massive stash of prefolds and my father-in-law asked for a demonstration, which I performed on a teddy bear. It was actually really cute, watching him practice afterwards, determined to get it right so he could hit the ground running in June.

My parents raised skeptical eyebrows — they are very much wary of tree-hugging hippie crap and big into convenience everything, from food to cleaning products to…yeah, EVERYTHING. So I mostly framed cloth diapers as a cost-savings endeavor. My mom expressed amazement at how far and “fancy” the new cloth diapering systems have come, and admitted that wow, they really are super ridiculously cute. But she won’t change them. They “intimidate” her, or something. (Or maybe they just provide a handy excuse for not being THAT hands-on of a grandmother, who gets to skip the diaper-changing duties altogether. Whatevs.) But I know that if she HAD to, she would. Maybe she’d talk about it afterwards to my sister on the phone and they’d agree that I’ve gotten REALLY WEIRD recently, but probably not, because she’s always been unfailingly supportive of my parenting choices, even ones that are the polar opposite of what she did with her own children. (All four of which, however, were cloth diapered.)

If the situation was reversed, and my parents were the ones who did most of the babysitting, I would absolutely not push cloth diapers on them, at their home, anyway. I’d show up with a package of disposables. Though when they came to visit at our house, yeah, sorry. We use cloth. This is what we have. They really aren’t scary or strange, swear to God. Take off old diaper. Put in pail. Grab diaper from drawer. Put on baby. Every few days, take diapers from pail and put in washing machine, just like I used to take the disposables from the pail and put them in the trash. Ta-daaa!

Let’s see…I actually have to think about other reactions here…we visit Jason’s aunt and uncle at the beach every summer, and I was hesitant to show up with the cloth diapers the first time, but again — they were resoundingly enthusiastic. Cloth diapers were what THEY used on their kids, after all, and disposables are expensive and filling up the landfills and etc. They had no problem changing the occasional cloth diaper when they watched the kids for the evening or to get Ezra up from his nap while we stayed with Noah out on the beach. (Though I can tell that old prefold habits die hard, because they always put extra inserts directly against Ezra’s bum, or used an extra unstuffed cover on top, not quite fully grasping the whole pocket-diaper concept.) Again, just another example and reminder that cloth diapers are not exactly a foreign concept to the older generations, and there’s usually at least ONE documented benefit that you can choose to focus on — your family might not be super into the environmental angle, but most people can understand and get behind the fact that cloth diapering saves you a buttload of money in the long run.

Honestly, the only really judge-y you freaking weirdo you moments have always come from other moms. Usually moms I don’t know and/or have just met. The equivalent of the playground drive-by about your baby’s lack of mittens or your toddler’s juice box. And weirdly, I got more crap for making homemade baby food than I EVER got about cloth diapers. Things people actually said to me included: “You know they sell that stuff in the STORE, right?” and “Oh, my sister/friend/daughter tried doing that ONCE, until she realized that she could just BUY it in JARS and it was JUST as good.” I never realized that pureeing steamed carrots made me such an idealistic overachiever.

One time — ONE time — I met a mom who managed to give me a hard time about the cloth diaper sticking out of Ezra’s pants waistband AND my little tupperware container of mashed sweet potatoes. She might as well have been wearing a t-shirt that said I AM INSECURE ABOUT MY PARENTING CHOICES and started making jokes at my expense about how weird I was (and it got noticeably hostile after her baby started rejecting jar after jar of Earth’s Best while Ezra Hoovered up everything I offered him, like I was showing her up ON PURPOSE). I was polite up to a reasonable point, I SWEAR, before I finally said something like “Seriously, I did not choose these things to make you feel personally attacked or judged or whatever. I chose these things because they work for us.” We did not go on to become best Mom Friends, obviously.

Dealing with potential blowback about cloth diapers is no different than dealing with potential blowback over ANYTHING. Breast or bottle. Co-sleeping or sleep training. Babywearing but using Baby Bjorn instead an Ergo or a using a sling and encountering someone who heard about that one kind of sling being recalled and are you sure your baby can BREATHE THEY LOOK SO SQUISHED IN THERE ARE THEY OKAY? Yeah, sure, you THINK you’re saving the world with your cloth diapers but I read an article once about how the water and energy you’re using to wash the diapers isn’t any better than the landfill waste, so WHATEVER. You’re either the Weird Mom who won’t let them have food coloring or the Bad Mom who treats them to McNuggets for lunch.

And honestly, I could not care less about any of it anymore. I’m a cloth-diapering breast-feeding bottle-supplementing co-sleeping crib-transitioning baby-food-making baby-wearing stroller-pushing ingredient-obsessing cartoon-watching Weird Bad Good Enough Mom, and I LOVE IT.