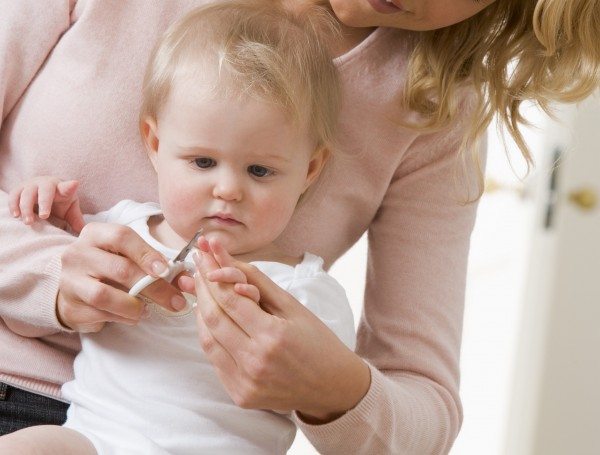 This is probably really obvious to most parents, but I cannot for the life of me figure out how to trim my daughter’s nails without her fussing, whining, squirming, etc. I have the Safety First baby nail clippers and I only knicked her skin once when she was 3 weeks old. She’s 13 months and it is getting harder and harder to wrangle her into holding still, not to mention that now her toenails need to be trimmed. It seems like her nails are scratchy within a week of the last trim, too, so we’re right back in the rocking chair with the nail clippers. Please tell me there is something really easy that I could be doing to get through this. I’m dreading the next several years of trying to get her to hold still!

Wait until she’s asleep. Really good and fast asleep. Then cut ’em off covert ninja style. Bring a stepstool to make it easier to reach them in her crib. Skip the socks or footie pajamas on nights you plan to trim her toenails.

That said, OCCASIONALLY it’s still a good idea to try to trim them while she’s awake…probably not right now, at 13 months, but as she gets older, just to keep the concept from becoming completely foreign and unfamiliar. Trim your own nails in front of her. If she seems at all interested in what you’re doing, see if she’ll submit to a practice snip. If not, fine. You’ll get her later. In her sleep. And her dreams. Mwa ha ha ha.

At some point — probably sooner than you’ll be ready for it — she might ask for nail or toenail polish, if you regularly wear either. And that’s usually the point when you can seize the trade-off opportunity and say fine, but you have to show Mommy that you can sit still and let me trim your nails first. And yes, I can testify that this works for us parents of all boys, too. (I got a bottle of bright blue nail polish as a party favor at BlogHer. My kids dig it. WHATEVER.) If you’re not comfortable with nail polish, a sheet of cool nail stickers/decals can also be a good bribe incentive for an older toddler or still-fighting-it preschooler.

Both of my boys were squirmers as babies and young toddlers, so we did the nighttime clipping for awhile. I don’t remember exactly how long, but now it’s no big deal. I promise: THEY DO EVENTUALLY CALM DOWN ABOUT IT. Huzzah! Probably by two, we were able to whip out the clippers whenever we noticed the talons and deal with it immediately instead of having to remember to sneak back their rooms later. Noah now understands the cause-and-effect part of it: If you squirm and wiggle and fight me, you’re more likely to end up with a nick or cut. It’s a glorious day when that bit of logic finally sinks in.

I trim Ezra’s nails after his bath, while he’s wrapped up tight in a towel on my lap, and I do a modified version of Five Little Piggies that I made up. Not THAT modified, just add “aaaand SNIP!” to each piggy’s activity: This little piggy went to market aaand SNIP, this little piggy stayed home aaaand SNIP, etc. And of course the last little piggy goes SNIP SNIP SNIP all the way home, and there’s still plenty of tickling involved.