Twitter Facebook Pin It Email Article
Prev Rubber Bracelets, promoting Cancer Awareness one preteen boy at a time Next Being Thankful for the Little Things 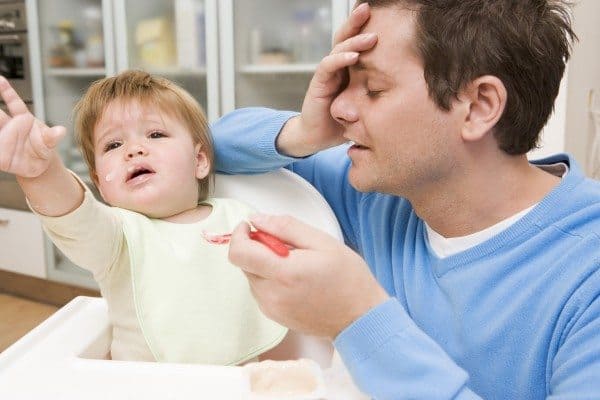 I have been reading your blog since my son was born in February of this year, and have so enjoyed it. I have laughed, cried, and read WAY too many of your posts out loud to my husband. (Now I just send him a link and hope he reads it, because really – WHO WOULDN’T WANT TO READ EVERYTHING YOU WRITE?!?!?!?!)

Anyway, here’s my question/problem/dilemma that I am hoping you can help me with…

My son is now 9 months old and has been eating solid foods since 4 months (our pediatrician said it was okay to start). Up until about a week ago, he was a pretty good eater. His favorites were fruits and oatmeal, but he would would eat veggies if we traded off bites with fruits. And puffs (rice puffs) – don’t even think about not giving this baby puffs because the world might end. LOVE the puffs…

He was really sick with a nasty cold/virus/fever yuk two weeks ago, and since then, he will not allow us to feed him anything from a spoon. WILL NOT. He gives me this look like, “Don’t even try it because I will throw a holy fit and you will see tears. NOT GOING TO OPEN MY MOUTH except for crunchy things. Yes, those I will eat. NOM NOM NOM.” He is nursing just fine and drinks pumped milk at day care without a problem. And – here’s the second thing I can’t figure out – he eats applesauce for them from a jar. We’ve tried all different kinds of food – he refuses everything.

So, I casually mention this strange behavior at work (I am an elementary school teacher) and everyone starts in saying things like, “Woah. That’s a huge red flag. You must be worried…” and “So he has some sensory issues, huh?” So I am writing to ask you to please be honest with me. As a mother with an amazing and wonderful child like Noah, am I missing something? I mean, I’m not trying to NOT see a problem, but I didn’t even think of anything like my co-workers are suggesting. I just thought that he was going through a weird phase. Maybe it is teething related? Maybe this is because I ate so many nachos from Taco Bell while I was pregnant? (I can’t explain why but that was all I craved.) Maybe my co-workers are just mean and only capable of giving assvice?

I was hoping you might have some words of wisdom for me? I sincerely hope that all is well with you and you’re feeling better with all the pregnancy yuk. May it pass speedily!

Thank you!
Mommy to a Crunchy Baby

Yes. Noah refused food from a spoon. He ate baby foods just fine for a little while, and then…he stopped. Right around the time (I think) we tried moving him up to foods with slightly thicker textures. I honestly don’t remember all of the details because at the time, I didn’t really think anything of it. Other than, possibly: Dang it, kid. Why are you being such a pain all of a sudden?

I thought it was a streak of self-feeding independence. He only wanted finger foods! He wanted to do it himself! Okay then. I shifted his diet to include as many pincher-grasp-friendly foods as I could; I handed him the spoon in case my involvement was the problem.

After awhile, yes, it became clear that we were dealing with a level of pickiness that completely baffled us. He still refused to use the spoon or touch anything “messy” or “squishy.” He’d touch things cautiously with his finger to see if they were hard or crunchy — if they were not, they were ignored. Purees and stews went out the window. Fresh fruit failed the “squish test,” as we called it, and so did cooked vegetables and meat and even pasta. He didn’t have enough teeth for carrots, so I fed him frozen peas right out of the bag.

We’d done everything “right,” we thought, in terms of offering lots of variety and tastes from our own plates and making mealtimes a positive, fun experience. And yet we were the parents who carried baggies of Cheerios and mini peanut-butter crackers everywhere we went because that is all he would eat. For months. The reintroductions of pizza crust and baked goods and the occasional mac-and-cheese were met with celebration.

So. Long story short. Yes, Noah’s sudden textural aversions were indeed indicative of his sensory issues. It wasn’t an oral-motor problem per se — he COULD chew and swallow just fine — he was just insanely hypersensitive and defensive about his mouth. If he didn’t like a texture, he’d gag until he threw up. If he LIKED a food, I had to ration it out in bites because he’d stuff his mouth super full (partly because it felt good, partly because he was SO FREAKING HUNGRY but still refused to eat non-preferred foods) until he choked on it.

Now he is five. Meat and fruits and vegetables and “sticky” foods (like applesauce or syrup or condiments) are not his favorites. They may never be. He would still probably live on crunchy carbs all the time if he could. But he can eat other foods and tolerate them and he is doing JUST FINE. He will even eat with utensils if we bug him enough! Huzzah!

Now. Your son. All of this is not to say that OH YES. A TWO-WEEK SPOON BOYCOTT FROM A 9-MONTH-OLD EQUALS SENSORY ISSUES; BETTER FIND A GOOD OT POST-HASTE OR ALL IS LOST. Hellllllll no. Let’s look at some possible contributing factors:

1) The spoon boycott/texture preference came on the heels of a cold. Congestion. Breathing difficulties. When you’re that little, figuring out how to breathe and eat at the same time can be a Big Deal. Having the spoon in the way of his only breathing option may have freaked him out a little bit, and he just needs some time.

2) He’s nine months old. Even Ezra, my life-is-a-buffet child with zero apparent sensory issues, developed a strong preference for self-feeding around this time. It can be REALLY frustrating to realize you have to cede mealtime control over to a small child who is going to refuse 90% of what you put in front of him, but the more you fight it, the more of an issue you’ll make it. Offer a variety of textures at every meal, refrain from the “just one bite” and the begging and the praising and the short-order cooking, and let him eat and refuse as he sees fit and act as if you don’t even notice. He’s still nursing and drinking; he won’t starve, I promise.

3) Speaking of nursing: Many (though not all) children with oral sensory issues have trouble breastfeeding. Noah certainly did. He did not like to latch correctly and did not have a strong suck, which was a contributing factor to my supply problems that led to my milk just drying up even though I continued to nurse and pump as much as I could. He preferred the bottle because it was easier, and probably felt better in his mouth.

So. Those are three reasons why you should not listen to your coworkers quiiiiiite yet. Give him some time, give him the opportunity to try a lot of textures (not just food — let him play with Play-Doh and Jell-O and whipped cream and a variety of different teething toys), and buy Ellyn Satter’s book to keep yourself from inadvertently making things worse. Mention it to your doctor at his next appointment, but please don’t feel like you need to go problem-hunting in the meantime.

Oh, and this is where I’m going to make you mad at me. Give up the puffs. I know. I KNOW. But seriously, they’re…garbage. Even the fancy organic “vegetable flavored” ones. They are super-sweet tasting and offer next to zero nutritional benefits. Completely empty calories. The baby equivalent to like, potato chips. And he’s probably past the point of needing food that easily dissolves in his mouth. He’s ready to start working his gums and whatever teeth he has with more challenging foods. And if he knows the puffs are an option, he’s already smart enough to know that he can hold out for the puffs, and he will. Replace them with freeze-dried fruit or some low-sugar whole grain cereal that at least has some fiber or something.