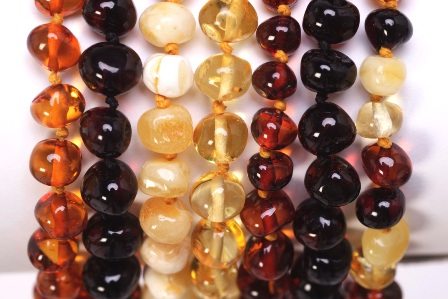 Hey, woman! Just found your site and am loving it. (OMG HOW DOES ANYONE NURSE WITHOUT A SMARTPHONE?! Needless to say, I’ve now read, like, half your posts ever since the baby is having a growth spurt and eating constantly.)

Anyhow, you and I seem to be a similar degree of granola-crunchy but not dirty-hippy, so here goes. I’m a cloth diapering, clothesline-using, breastfeeding, Ergo-wearing, organic container-gardening, babyfood making, composting AND worm farm type of gal. Dear lord I can’t believe I just typed that. (Oh crap, maybe I *am* a dirty hippy.)

I like going the natural route if possible, but on the other hand I’m a scientist by trade and I HEART FACTS! So a lot of this magnetic-bracelet/aura healing crystals/green tea detoxifying foot patches, etc. just PISSES ME OFF.

SO, onnnnn to the question! Amber teething necklaces. Do they work? I get that they contain succinic acid, which is an anti-inflammatory, but… ya know… really? And do the possible benefits outweigh putting BEADS on your BABY!? (I think my baby is making NOM NOM NOM noises just thinking about ripping such a thing off and devouring it.) Uh, choking hazard much?

So what do you think?

Did you steal my brain? Were we separated at the birthin’ place many many years ago? Because like you, I feel like the most curmudgeonly skeptical hippy in the world sometimes. Yes, we cloth diaper and baby-wear and make our own baby food and grow vegetables and compost and shun anything processed and artificial and recycle and all of that, but…well, I chose my green/natural initiatives after reading, you know, FACTS that changed my mind and laid out the benefits clearly and objectively. I am not the moron from the pro-HFCS commercials who just says “oh, that’s bad for you!” because I maybe heard it from somebody somewhere and then stares blankly when asked to elaborate. Ask ME why we don’t consume HFCS and you’ll get a damn lecture with Powerpoint, at the end of which you will probably run away screaming and swear to never talk to me again, because ANNOYING.

But…amber teething necklaces. Yeah. I’ve never owned one. Never really thought about owning one. For those of you who aren’t familiar with this wives’ tale gone mainstream: Baltic amber contains a “natural analgesic” that can, in theory, be absorbed through your skin to relieve pain. Here’s the wiki on succinic acid, where there is indeed a passing mention of it being historically used to relieve aches and pains — though just how far back in history isn’t mentioned. Today, you’ll often see amber advertised for back pain and arthritis, but also for teething pain. Mothering message boards are chock full of parents who SWEAR the necklaces work, or at least helped, though there are usually a couple people who say the opposite, or admit that it’s little more than a placebo effect for exhausted parents. He’s not crying at this particular moment! He slept better last night! Well, yes, teething pain does come and go, and sometimes we misdiagnose all sorts of other crankiness/discomfort as ongoing “teething”…but he’s wearing the necklace! That HAS TO BE IT.

I have two problems with the necklaces, even if we do buy into the idea that succinic acid is strong and concentrated enough in the jewelry to be absorbed THROUGH YOUR SKIN, INTO YOUR BLOODSTREAM and STILL be strong enough to make it to the source of pain — better than or equal to, say, a straight liquid analgesic like Tylenol or Motrin, or teething tablets inserted directly by the gums:

1) A lot of what’s sold as “amber” these days is actually mostly resin OR has been treated artificially to look pretty and sparkly and sun-kissed. There’s a very high scammy quotient among products being specifically sold as “healing” amber. Basically, if you decide to buy a cheap one just to see if it works at all, you’re probably still getting ripped off with stones that don’t really contain much of the magic acid in the first place. (True Baltic amber contains about an 8% concentration of the stuff.) I’m sure there are reputable places selling the real deal, but be prepared to do some research first and educate yourself on how to spot real Baltic amber before buying the first necklace you see because it looks cute.

2) Beaded jewelry on a baby. Around their NECK, even. I just…yeah. I have a hard time being not nervous about that part. I just came from a message board where MULTIPLE PEOPLE admitted that they NEVER took the necklaces off — even at night. And others simply wrapped it around their baby’s wrist or ankle at night, convinced that it was the reason their fussy baby was sleeping better, and that the baby wouldn’t be able to figure out how get it of since it was under their clothes or something. People: I don’t care how sturdy the construction is or how safe the clasp claims to be, or what ancient cultures used to let their babies wear, please please please don’t put your infants in a crib unsupervised with beaded jewelry wrapped around their necks or limbs, okay?

Personally, after the amount of research I’ve done just on the topic of pregnancy and TOPICAL chemicals, oils, and other ingredients in health and beauty products, I remain incredibly skeptical of the idea that enough of the acid inside a stone could really enter a baby’s bloodstream in amounts that would have a real, profound effect on pain. I mean, think of all the crazy nasty stuff in hair dye, and the relatively insignificant amount that actually gets through your scalp. (I guess that’s the justification for letting babies wear the necklaces 24/7?)

However, there’s obviously a pretty decent and vocal population out there who swear the necklaces worked, or were even their own personal teething lifesaver. You know? Good for you. I’m glad you found something that worked. If you want to give them away as shower presents because they worked so great, that’s really no different than any parent praising their own favorite baby product to the skies. Replace “amber teething necklaces” with Miracle Blankets/obscure pacifier brands/gripe water or whatever One Thing we all have that in our minds, is the Greatest Thing Ever because it worked well for our particular baby.

And seriously, I get that I am technically knocking something I have not tried. The most obnoxious thing ever, right? Personally, teething was all over the place for us. Both of my boys were early teethers, and prone to getting teeth rapid-fire, one right after another. Sometimes they’d just wake up with a tooth, like it was no big deal at all…and then the next tooth involved a protracted period of misery and drool and crankiness. I used Tylenol and Motrin sparingly — never in amounts I felt were excessive, but whenever it was undeniable that they were seriously in pain. I used Hyland’s teething tablets, which HA HA IRONY, have now been brought under scrutiny by the FDA. I always thought they did a great job, but — again, HA HA — other parents find them completely useless. (And I imagine the increased popularity of the amber jewelry could go hand in hand with parents trying to find an alternative to the tablets, now that even THOSE have been flagged as worrisome. We cannot win.)

Other than that, we survived teething (including molars!) just fine, with chewy rings and toys and letting them chew on cold washcloths. Ezra liked to gum on nice cold pickles or carrots — supervised, always, while Noah preferred those tried-and-true plain old plastic teething beads. I did own one piece of teething jewelry…for myself. I wore a Smart Mom Teething Bling necklace for Ezra to grab and pull and gnaw on to his heart’s content. We got an amazing amount of traction and entertainment out of that pendant. It was awesome, with no quasi-science involved other than babies like to pull and chew on Mama’s necklaces more than anything already, so why not just wear something kind of cool-looking that makes it okay? 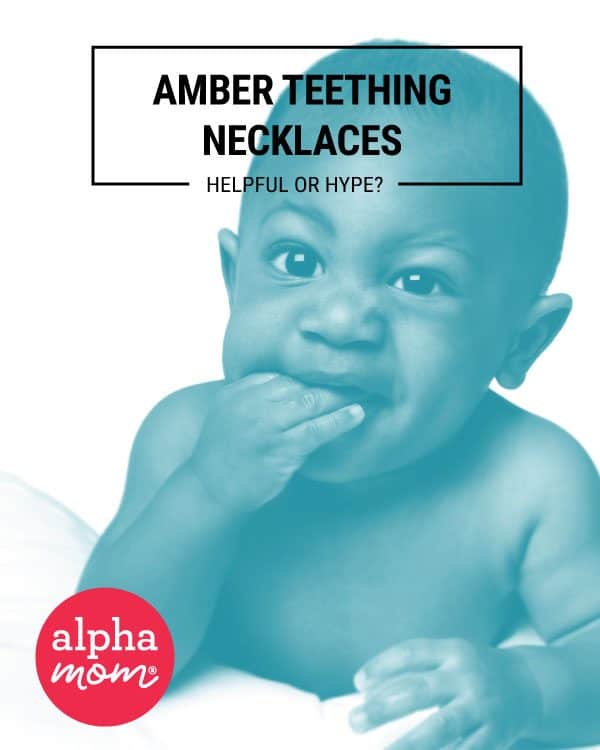