Twitter Facebook Pin It Email Article
Prev What Do You Do When You See Bad Parenting? Next The Screaming Phase 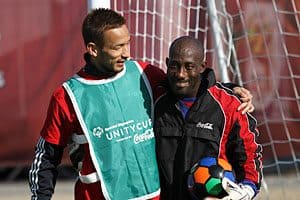 One of the wonderful advantages of being asked to write about P&G’s Thank You, Mom campaign is getting to learn more about the wonderful organization that is the Special Olympics.

Until recently I was under the impression that the Special Olympics was an event– namely the World Games– that takes place only once every four years. Instead I have come to learn that the organization works tirelessly year-round to provide training and competition opportunities for persons with intellectual disabilities.

One area of particular focus and growth for the Special Olympics is Unified Sports Teams, which are sports teams that are composed equally of athletes with intellectual differences as well as those without. So, you can find soccer teams, golf teams, track & field relay teams, volleyball teams (to name a few examples) where an athlete with special needs is playing side-by-side with a fellow team member who does not have a disability.

More exciting is that I learned that some states are beginning to adopt laws that mandate that schools create unified sport teams at the high school level, not just boys sports and girls sports teams. Tim Shriver, the CEO of the Special Olympics tells me that he is eagerly trying to start unified sports teams all over the country:

Envisioning a future world with unified sports teams found at every school in the United States gives me goosebumps. I can’t think of a better way for our kids to learn about others and themselves.

An exciting piece of news is that I get go to Athens, as a guest of P&G, to watch some of the World Games. When I’m there I’m extra excited to see first-hand a unified sports team in action.

Does your school have unified sports teams? I’m excited to learn more.