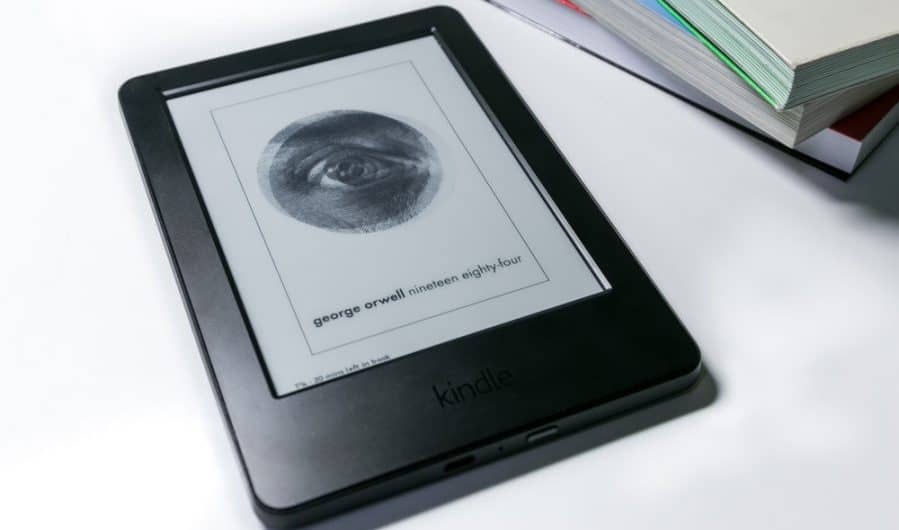 Let’s say that you have a hankering to reread George Orwell’s 1984, which—if you’re around my age—you probably had as assigned reading at some point in high school. It occurs to you to go back to it for no particular reason, of course. It’s just a book: An incredibly prescient, depressing book; a book which just happens to be shooting to the top of Amazon’s bestseller list this year (pro tip: If you have Amazon Prime, you can borrow the Kindle version for free).

If you’ve never read it, 1984 is often described as a foray into a “chilling, totalitarian dystopia” where “Big Brother is always watching” and “the truth exists because the Party says it’s true.” And it was written in 1949, which just goes to show you that modern politics doesn’t have a monopoly on doomsday scenarios.

Perhaps you feel like you’d like to read or reread 1984 and you’re wondering if this is something you can do with your kid(s), and if so, how to approach any discussion about it. I’m here to help.

Is 1984 suitable for children?

The short answer to this is no, it’s not. It contains complicated social themes, violence, and sex. When covered as part of a school curriculum, I mostly see 1984 assigned to juniors or seniors (17-18 years of age). That said, the longer answer to this question is yes, older children can handle 1984, particularly if you’re reading it along with them. Personally, I think it’s fine for any kid of high school age (14+) without much worry (beyond, of course, the fact that it’s disturbing no matter how old you are). I would’ve let my own kids read it in middle school, even, but that’s a know-your-kid, case-by-case-basis kind of thing (and I would’ve asked them to discuss it with me if they had read it then, just so I could check in on how they were handling it). Again, I wouldn’t judge you if you let kids younger than middle school read it, but I probably wouldn’t.

How should we approach the actual reading?

I’m a huge fan of reading aloud (even when your kids are plenty old enough to read on their own!), but generally I reserve it for books which are fun to read out (lots of dialog and humor), and this is not that. If you spend a lot of time in the car with your teen (maybe you have a long commute?) it might work to get the audio version and listen together a bit every day. The most obvious approach, though, would simply be to each read on your own and set aside some time to talk about it together as you go. Beware too much structure, because then it will feel like work (“Mooooooom!”), but hey, the book is split into 3 sections and an appendix. I’d make a plan to check in after each section.

What should we talk about?

Well, that’s up to you, but I have a few ideas. Bear in mind that I am a huge fan of the Socratic Method (asking questions to stimulate discussion), and I’m not suggesting you turn this into a series of lectures. The goal is to see what your kid is getting out of it, and what they think.

Before starting the book:

1) What was happening in the world in the late 40s when the book was written?
2) Why did Orwell write this, do you think?
3) What do you think the story is going to be like, based on what you already know?

1) What do you think of Winston so far? (His job, his inclination to disobey the rules, his viewpoint in general?)
2) What are some of the Newspeak words you’ve come across and what do you think of them? What do you think they’re designed to do and do you think it works?
3) Is the level of surveillance Orwell describes a horrible fantasy or something you see as plausible? (Bonus: Depending on how this conversation goes, this is a great time to talk about privacy on the Internet and on personal devices, apps, etc.)

1) What do you think of Julia? Do you find it believable that she is drawn to Winston?
2) What is your understanding of the proles vs. the Party members? What makes people one or the other?
3) Did you think Winston and Julia would be caught? Did it happen the way you expected it to? What was most surprising?

1) What was the most disturbing aspect of what took place at the Ministry of Love, to you?
2) Do you think torture can be used to create not just compliance, but to change beliefs? Why or why not?
3) What do you think Orwell’s ultimate lesson was intended to be?

I’m not going to suggest any “right answers” here, by the way. There are, to my mind, obvious themes and pieces of points, throughout, but the discussion is what makes it most interesting to me. Sometimes the best bits are found in nuance, rather than what clubs you over the head repeatedly. On the other hand, I will share this: When I read this book back in high school, I was taught (or perhaps we concluded) that it was about totalitarianism and loss of individuality. And I’m not going to say that’s not true—those are ever-present themes, to be sure. But as I reread 1984 as an adult, as a writer, as a person living under the 45th president of the United States, I noticed myself reacting a lot less to the notion of being watched 24/7 and a lot more to the idea of the government simply creating the truth that suits it, and words that might be used for dissenting simply being struck from the language altogether. I’m not telling you what to think, I’m just sharing what I did.

You may have noticed I didn’t address the appendix. Some scholars feel that’s the most important part of the book. I think it’s hard to swallow as a teenager (and honestly, not much easier as an adult), and I’d only recommend it for those who simply cannot get enough dystopia and free-floating anxiety from the main story. I skimmed it, and it’s interesting, but I was depressed enough. But if you want some more to think about without slogging through the whole appendix, I recommend Reading 1984 in the age of Trump and Teaching 1984 in 2016. Both stories lend addition dimensions to what we can learn about Orwell’s intentions and parallels in the present day.

The best of this, to me, is that I think it provides a vehicle for teenagers to express their worries and fears in a way that feels safe. (For example: They might feel silly or melodramatic saying, “I’m worried that the government either doesn’t know or doesn’t care what is actually true,” but be willing to talk about Winston’s job altering historical texts and how the malleability of truth in the book is worrisome. This provides an inroad to discuss what is happening in the world around us, and how we can handle it.)

Again, you can find 1984 at your local or school libraries, at our affiliate Amazon or you can borrow the Kindle version for free if you’re an Amazon Prime member.