I thought I was terribly fond of hats, hats made me feel good and I liked them. I had a soft spot in my heart for hats really. You people are maniacs for the hats and I can’t believe how many pictures of hats I now I have sitting in a folder titled, “The Internet Is Crazy About Hats.” I’m absolutely serious. (Note the other folders and documents, specifically ‘complain’ which is an autobiography I’m working on. Not really.) With all these lovely pictures of hats to choose from I’m having a difficult time organizing them into any sort of loose structure.

So today, I bring you ‘A big collection of adorable people wearing adorable hats.‘

Cowboys and cowboy hats are so predictable. But what if you have a baby and a cowboy hat? Refreshing. 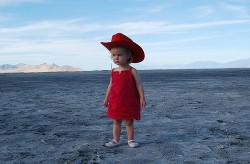 How about two babies and cowboy hats? Double refreshment. 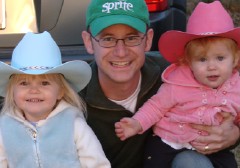 (The girls from Mix’d Equally)

What about a lovely woman from Trinidad and her adorable water wearing a cowboy hat. Exotic. 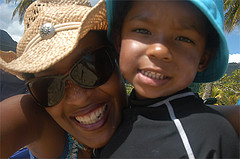 A cat and a cowboy hat? If I know anything about cats it’s that they love wearing things to entertain the people around them. What? You disagree? Just look how happy Tess’s cat looks about the cowboy hat on his head. 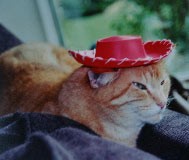 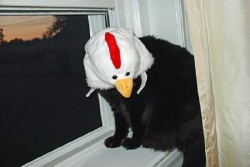 I am about to blow your mind though: instead of a cat wearing a hat, here’s a child wearing a cat (hat). 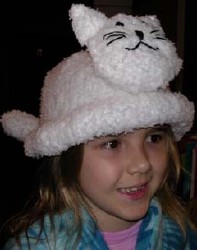 (From One Tired Mom)

Here is a Cat In The Hat hat not worn by a cat at all. Susan tells me her sons like to wear it all the time, even more than they love eating a lime. (Rhyme! Like Dr Seuss!) (I know I really should leave the rhyming to someone with talent for it.) 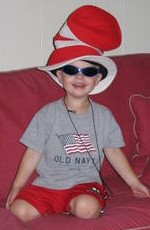 Getting away from the cat thing and that horrible rhyme I just tried to make, I got a couple of pageboy hats in the ones you sent along.

First Ryland wearing his Diesel hat which gets him many compliments. 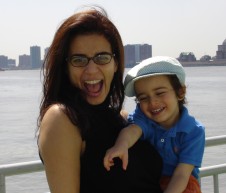 Then little Anzu in her knit pageboy, though it’s very reminiscent of a beret. Her mom’s favorite hat. 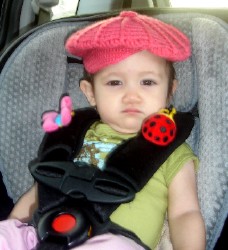 Julia sent along a few hats. My favorites include this spider hat because it looks as if the spider is some sort of brain sucking parasite. 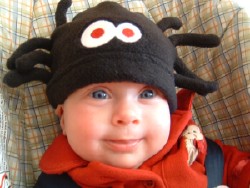 I also like this one because it’s so tasteful and understated. Also multipurpose. 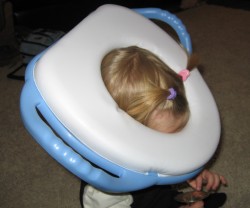 Amy sent me this picture of her little boy wearing a hat from a favorite vacation spot. She says, “you haven’t lived until you have been to the Goat Island Resort in South Carolina….the picnic tables are magnificent!!!” Cute hats and picnic tables? Perfect. 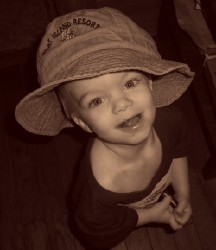 Some people like to put their kids in hats for their own entertainment. In Madge’s family they wear hats together. Hats which are cute, like the nubbily purple knit hat she’s wearing, and hats which resemble a small mammal resting comfortably on one’s head. 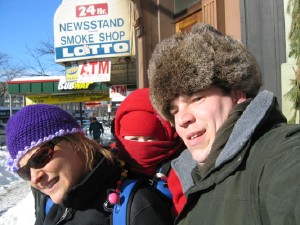 Margaret sent a picture of her little boy wearing this hat she says makes him look like a little Who from Whoville. Perhaps he should get together with Susan’s boys with the Cat In The Hat hat. 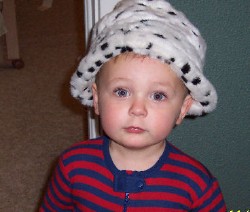 I used to take a knitting class each Wednesday night and found myself drawn to knitting hats which would transform the top of my baby’s head into a piece of fruit…or a vegetable. When I started knitting an eggplant hat, I started to think I’d pushed the theme a little too far. But an apple, an apple is classic. Just ask Amy who sent this picture of her daughter wearing an apple hat her grandmother knit for her. 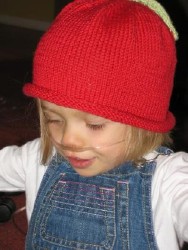 Krissy says, “Our favorite hats are the homemade kind — because they are indeed, one-of-a-kind!” She’s not kidding, I don’t think I’ve seen another hat like this one before. 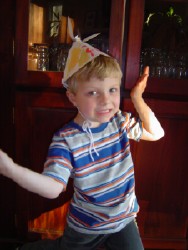 Lucy’s favorite hat is this pretty one with big flowers all over. Cheerful + warm = perfect. 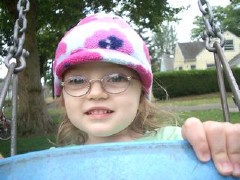 Karin sent me this picture of Shea wearing a pink feather-y creation. Karin says, “I died from the pinky cuteness.” I didn’t die but was overcome with the desire to squeeze those baby cheeks. 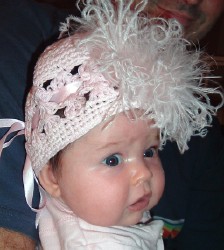 Jessica wrote to tell me about her Etsy shop where she sells her own handmade hats, like this crocheted one. Best of all you can order custom work from her. 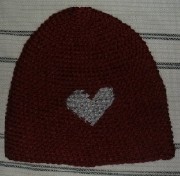 Courtney wrote in and reminded me of the lovely handknit baby items at She’s Crafty. I can’t believe I forgot to include these hats when I buzzed about hats last week. I hope you can forgive me. Here’s one of the beautiful choices, I hope we can put this behind us.

You’ll have to come back later this week when I’ll be talking about National Handwashing Week. Yes! There really is such a thing.