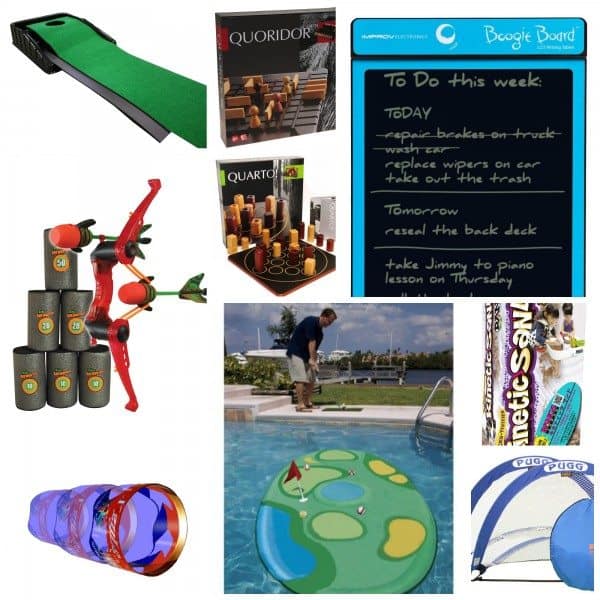 It’s Toy Time again. Or, as we call it in my house, “What the heck can we buy these boys for the holidays now that they’re 11 and 13 and they only want cash and food?” Honestly, I miss the days when we could just gift them a cardboard box and a toy hammer and those would keep them occupied until nap time. But since that’s no longer possible, my sons tried out a bunch of toys and games that appeal to their age group and aren’t “for babies.”

Here are our favorites toys and games this holiday season: 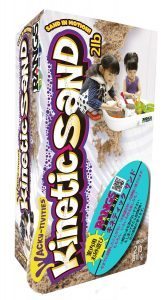 The boys begged for this sand toy when they played with it at some store in the mall, but I refused to buy it.  After all, why would I willingly bring dirt into my house that I’d then have to vacuum up for hours? But I was pleasantly surprised by this magnified sand that sticks to itself and remains fairly contained. The kids put it in a big box and ran their hands through it, making shapes and tunnels, for much longer than I expected. Younger children would probably play with it even more. 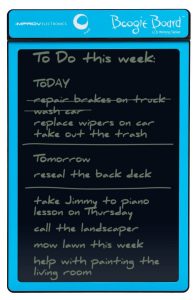 This Boogie Board LCD Writing Tablet is a big seller at our local toy store, which was a bit perplexing to me. After all, a lot of kids now have iPhones or iPads or something similar, so what’s the appeal of this glorified sketch pad? Well, it’s only $20-ish and “super cool” according to my boys. Kids can write whatever they want on the screen with the stylus (or their finger), then click a button to immediately erase it and have a blank page. Jack took his to school (it’s easily packed in a backpack) and he used it when he did math problems. It’s also be a great way to play Hangman or Tic-Tac-Toe when you’re on a roadtrip or at a restaurant and don’t have paper and pen.

The Boogie Board LCD Writing Tablet can be bought via Amazon. 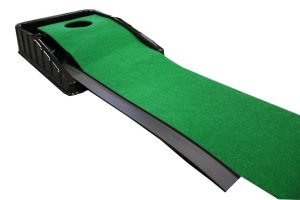 This seems more like something an 80’s lawyer would have in his office, but my boys still had a lot of fun with it. The Club Champ Automatic Golf Putting System is a portable putting green and is basically just a strip of turf leading up to a hole—very no frills. You need to supply your own golf club, which we didn’t own, but a quick trip to Goodwill yielded two nice putters at $3 a pop. This is a great inside toy during the winter months–kids can arrange tournaments, place obstacles on the green, etc. But only if you think they won’t hit the ball too hard and break a window. This golf putting system is available through Amazon. 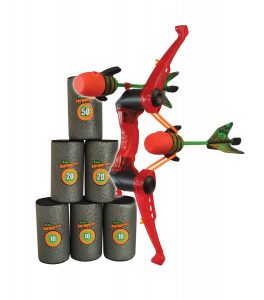 Per my son Jack: “It’s fun because you shoot at the targets and it’s fun to see how good you can do and the bow and arrow is really fun.” So I take that to mean this plastic/rubber/foam safety bow and arrow set with targets is, in a word, “fun.” Though the Zing Air Hunterz Target FFP Pack is best for outdoors, this set is still doable inside because there’s nothing sharp or hard on it. If you shoot the arrow into a wall, it just bounces off and doesn’t leave a mark. Kids can set up the cylindrical foam targets and try to knock them down. Perfect for little Katnisses and Robin Hoods. 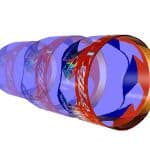 Priced under $10, this flying gyroscope is the perfect stocking stuffer. A new twist on a Frisbee, this small, plastic toy can be thrown like a football up to 200 meters. (We haven’t made it that far yet.) The X-zylo Ultra Gyro Toss is best played outdoors in a park with two or more people so you can catch and release. Very cool. Available through Amazon. 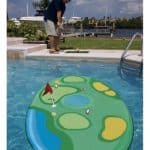 A pool toy seems like an odd choice for a holiday gift, but since we live in Texas and have a pool, we thought we’d try this out.  Pro Chip Island Golf is a “portable floating practice target for the avid golfer,” this twist and fold green is placed on the water, then you hit velcro-covered balls onto it from the deck and try to get them to stick closest to the hole. OK, a little silly, but my boys really loved it. Plus you can also play with it on the grass. I imagine this will be a lot more fun in the summer when we can actually get in the pool to retrieve the balls instead of having me do it with a net while trying like crazy to not fall in. Available through Amazon. 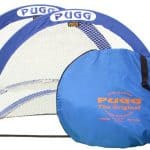 My kids LOVE these portable 4-foot soccer goals that they can easily set up in the backyard. The portable training goals come in a carrying bag, then twist open and can be anchored to the ground with attached pegs. All of that is good news because they can also be easily taken to the park or the school, and won’t fly away even when it’s windy. They come in various sizes, but the 4′ ones seem to work for my 11 year old. Available through Amazon. 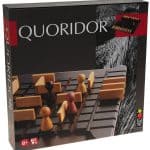 This deceptively simple game is actually a wonderful way to get your kids thinking strategically. Players must choose to either move their pawn or block an opponent by adding a fence. All four of us played Quoridor and it was really challenging. The boys especially loved it and I could tell they were getting better and better at anticipating their next moves. The price is a little high for a game, but it’s really, really nicely made out of wood and quite pretty to look at. I can see this lasting long enough to be handed down to grandkids. Available through Amazon. 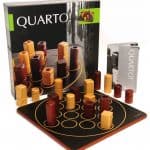 From the same maker as Quoridor, this is also a strategy game. Albeit a bit easier, as it’s recommended for ages 6+. Quarto is also their most popular game, and I can see why because it’s fast and fun, but there are levels of strategy you can still employ. You win by placing the final piece in a row of four that has a single characteristic among all four pieces. The twist is that your opponent always selects the piece you play. The boys really enjoyed this one. Available through Amazon. 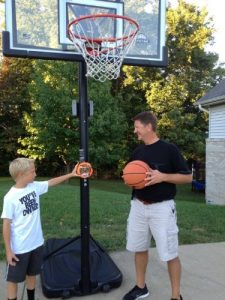 I don’t know about your kids, but when mine play a pick-up basketball game in the driveway, there’s almost always controversy. Who fouled who, how many points does someone have, what game should we play, etc. That’s why I’m in love with this digital scoreboard that tallies scores from 0-99. It’s also programmed with 10 games, which livens up their playing big time. Games like HORSE and PIG are shown on the screen with the letters and it even oinks like a pig when you lose. (Okay, I didn’t appreciate that when I lost, actually.) But the best part about this electronic that straps easily onto portable basketball pole, is the REF feature. Whenever there’s a play or a possible foul in dispute, kids hit the REF button and the scoreboard makes the call. Not mom. And that’s a slam dunk. Available through Amazon.

So there you have it. Lots of toy and game options for bigger kids who want to play both outdoors and in. If you have other recommendations for toys that your family uses and loves, please let us know in the comments section.