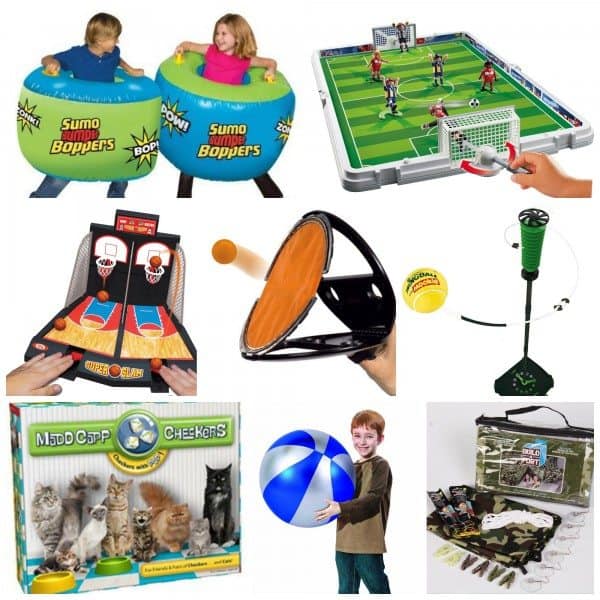 When your kids get a little older, like mine who are now 10 and 12, it can be hard to find good holiday toys for them. Legos, dolls, and action figures no longer cut it for kids who now think they’re super mature. Honestly, if my boys had their way, everything they got from us would be a video game. Or cash. They like cash.

Which they use to buy video games, of course.

But because I want them to be active and not pale couch potatoes, I decided to try out a few toys that would get them moving or at least keep them active. We played with all of these over the course of a few weeks and had a lot of fun. Some toys we loved, some we didn’t. But at least none of them needed to be plugged in. 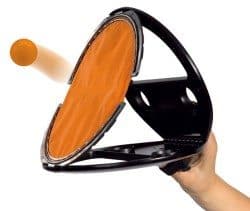 I can’t really explain this throw and catch game, Squap, very well in my own words, so here’s what the manufacturer has to say: Just put the ball into the Squap mitt and open your hand as quickly as possible. The ball launches, then soars through the air to a friend who catches it by snapping the Squap mitt closed around the ball.

My kids LOVE this simple, but still challenging toy. You can play it with another person, or by yourself against the wall. It’s basically a great test of hand-eye coordination. It doesn’t take any batteries, which is always a plus, the balls are lightweight like ping pong balls and it can be played indoors, outdoors and in small spaces. (It’s a little noisy, but not that bad.) So for that reason, I really like this one. (Ages 6+, $24.99) 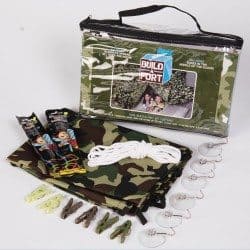 My boys have built forts for as long as I can remember. Unfortunately, they usually do so with every blanket, towel and pillow they can get their hands on and then I have to spend the rest of the day remaking our beds. The Build-A-Fort kit seems to be made exactly for kids like them and parents like me.

The kit contains two large lengths of camouflage fabric (so they can blend in to the ficus tree?), a rope, six giant clips, six suction cups and two glow wands to use for light once you’re inside the dark fort and want to read your comic books. The suction cups, clips and rope make it easy to customize the fort as they can affix the fabric to doors, dresser knobs, walls, etc. (Note: Although it’s for ages 3+, I wouldn’t let young kids use this unsupervised due to the rope and smaller parts.)

My boys loved this fort kit and got very creative in how they used it. My son Jack even took it over to a friend’s house for a sleep-over (it’s easily packable) and built a fort to sleep in over there. (Ages 3+, $32.99)

Verdict on Build-A-Fort: Pick (Currently unavailable. Boo!  But here is a similar item) 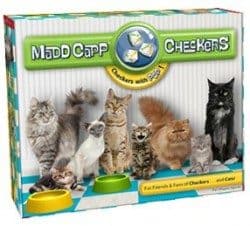 It probably says a lot about our family that we were immediately intrigued when we read the phrase “For Friends & Fans of Checkers … and Cats!” on the Madd Capp Checkers box. After all, we like checkers! We like cats! Meow! And we’re all bored with regular Checkers, so this version was a lot of fun.

Madd Capp Checkers has some twists like a dice popper as well as slightly different rules. The main one being that you can move your opponent’s cat bowls (yes, I said “cat bowls”) and get “kinged” with a fish skeleton crown (yes, I said “fish skeleton crown”). All of that makes this game fast, fun and strategic and something kids will want play more than once or twice because it’s actually challenging. (I will say that I think it’s priced a little high for a board game, so be alert for sales.) And if you’re not a kitty fan, there’s also a dog version. (Ages 8+, $25.99) 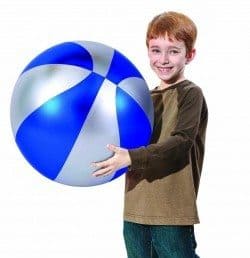 Because we live in Texas, it makes sense that we’d have a Y’all Ball in the backyard. (And it’s “y’all,” not “ya’ll. Remember that, folks.) I’d never heard of these balls before, but the boys went nuts for them when they saw them displayed in a toy store. Basically, the Y’all Ball is—-a ball. Can’t get simpler than that. But it comes in three different sizes and is very, very bouncy without being hard like a volleyball.

Y’all Balls are covered in soft, colorful, glossy fabric that seems really durable so far. (Also, it’s hand-washable.) Our ball was silver and blue XL version that was easily inflated by my son Jack with a sports ball inflation needle.

The boys have played with this ball in the backyard for weeks and still don’t seem to be tired of it. I’m not exactly sure what they do with it besides run and round and yell, “Dude!” but it’s entertained them and their friends for a lot longer than I expected. We keep it in the garage, but it might be a pain to store in a small apartment without deflating it first. (Ages 3 months+, $12-36) 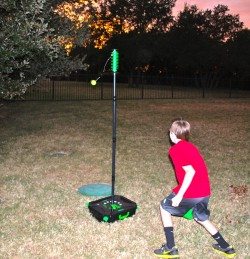 Mookie All Surface Pro Swingball is basically like the game tetherball, except instead of hitting a big ball with your hand, you hit a tennis ball on a rope with a paddle. (I think there was an older version of it called Zim Zam?)

You have to build the game before playing it the first time, and it’s basically a steel pole put into a plastic base that you fill with water or sand. That’s important because once the kids get going, the ball whips around pretty fast. To play, two players hit the ball alternately, one player hitting in a clockwise direction around the pole and the other hitting counter-clockwise. The first player to the groove at the top of the Loose Loop wins. (That makes more sense when you look at it.)

My kids really, really loved playing this in the backyard. And it’s really portable—everything packs into the base—so it could be easily taken to the beach, park or anywhere you like. Lots of fun and a good work-out, too. (Ages: 6 months (what is the manufacturer thinking?) to 8 years, $49.99) 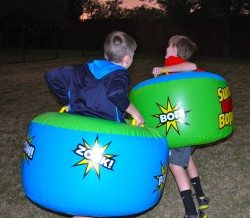 The boys had tons of fun with these, but they’re definitely an outdoor toy. The bumpers are pretty sizable and cumbersome and I can see them causing damage in a house with a lot of breakables. We used ours in the backyard only.

A few things I didn’t like about them were the time it took to inflate them. Our basketball pump didn’t work, so I tried to blow them up myself. (Which gave me a nice, cheap high, but blech.) My husband noticed that the flap in the nozzle wasn’t punched through, so he had to do that to get the air inside the tube. Also, they are sold individually, so you really have to buy two (for a total of $40) to play with them the right way. And while they’re still holding up, I imagine that the thin plastic might tear or get holes with enough crashing and bopping into each other. (Ages 5-12, $19.99 each)

Verdict on Sumo Bumper Boppers: Pick (with some reservations) 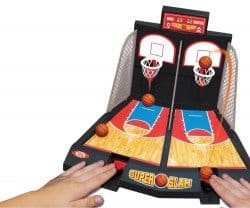 My basketball-obsessed son Jack was very excited to get this toy, Super Slam Basketball, that’s kind of a mini electronic version of the Pop-A-Shot arcade game. It can be played by either one or two players and to you put a plastic ball on a lever, then pop it up and try to get it into your basket. A digital scoreboard counts down from 60 seconds and keeps score for Home and Visitor.

The plusses to this game are that it kept Jack occupied for a while and he kept trying to get a better score. But unfortunately, the minuses are much more plentiful.

First, it’s really, really flimsy plastic. The sides of it keep coming loose and it’s a little too lightweight. Second, it’s better when played by just one player because it gets very cramped when two players try to do it together. (Especially when one is a middle-aged-mother.) And third, it’s super loud and has no volume control.And I do mean super loud. I put a towel over it at one point to muffle the sound, much to Jack’s dismay. (Ages 5+, $19.99) 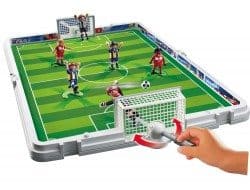 Per the manufacturer: “With six athlete figures primed and ready to play, this set comes fully equipped with everything kids need to have a complete game experience. Goalie figures connect to an included goal joystick that allows kids to control the goalies’ movements from behind the goal net. This compactable and travel-ready set also includes a 22 x 33 inch field, soccer ball and other accessories.”

While this toy, Playmobil Take Along Soccer Match, looks amazing and is very well made, like all Playmobil products, it was super disappointing. It’s too big and long to be played by one player, and even two players is difficult because you can’t move the figures in the middle of the field while also manning the joystick-controlled goalies. My boys quickly lost enthusiasm for it and had to be asked to give it a few minutes of play by me.

Also, while it’s supposedly a “take along” game, it’s not that easy to pack it up and go. There’s no hinge, so the entire thing has to be taken apart, then reassembled and the small parts put in a bag and who wants to do that? It’s too much buck for not enough fun. (Ages 5-10 years, $64.99)

So there you have it. Lots of options for big kids who need to be active. If you have other recommendations for toys that your family uses and loves, please let us know in the comments section.