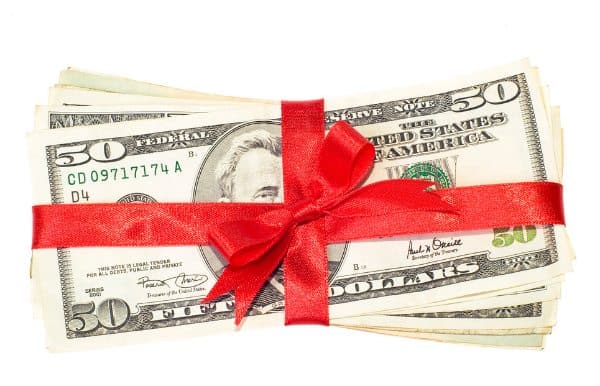 Why The “Best” Holiday Gift For Teens Isn’t For Us

“Everyone complains about how hard it is to shop for teens,” I told them, “except for these people—” I gestured to my screen “—who write articles like ‘Great Gift Ideas For Your Teen’ who say it’s easy.” There was some crowding around my computer, and we scanned the article together.

I felt like the article was kind of lame, myself, but I was curious on her take. “Really? Why?”

“Because that should be a very short article that goes like this: ‘Great Gift Idea For Your Teen’ should just be followed by a bunch of dollar signs. The end.”

I queried her brother to see if he agreed. He gave me a very “duh, Mom” sort of shrug and said, “Well, money is the best gift. That way I can get whatever I want.”

All about the spirit of giving, my children are. They appreciate the care and thought that goes into gifts, value any kindness presented to them, and… yeah, no. They want cash. Cold, hard cash is the language of teens, and if we would just fork it over, please, that would be great.

Spoiler: I don’t give my kids money as gifts (or, you know, ever). I get what they’re saying, and I understand that at this age there is nothing headier than making your own buying choices and having the means with which to achieve them, but I don’t love the idea of just handing over some cash—even though that’s what they truly want—and conveying that at this special time of year, I love you so much that I couldn’t be bothered to figure out what you like. (They wouldn’t see it that way, and I’m not saying that’s what it means when someone gives cash. I’m saying that’s how I feel about it, because I happen to love picking out gifts for others. To me, part of the joy of the process is the surprise element, the “how did you know?” part of it. It’s my hang-up and I’m not attempting to project it onto anyone else.)

Money feels impersonal to me, even though the kids assure me that they don’t see it that way. At the same time, my kids are well taken care of and don’t want for any essentials, and the things they do really want are things they won’t be getting from us. (Did you know my teenagers are the only ones in the whole world, or at least the only ones in the whole high school who don’t have smartphones? Because their mean and terrible parents don’t think they need them? Feel free to report us to Child Protective Services now that you know the awful truth.)

I’ve never been a bury-them-in-gifts person for Christmas. When they were small, I either did three gifts (Jesus got three gifts, you know) or the “something they want, something they need, something to wear, something to read” approach. As they’ve gotten older, it’s shifted a bit. Nowadays it’s more One Big Gift and a few small things, but even that big gift is something I could argue they need—a computer, one year; an upgraded flute for my daughter, one year, and a marching piccolo, the next; the trampoline which was meant to lure my couch potatoes outside.

When relatives ask what to get them, I suggest gift cards. To me, that’s better than cash, because they have their freedom but at the same time, we know where the money goes. My gaming son is crazy for Steam, while my daughter makes short work of any iTunes credit or the opportunity to shop at her favorite teen consignment clothing store. Those are gifts they love which are easy for people to get them. And that’s great.

But when I shop… I want to shop. It doesn’t need to be a lot of stuff, or super-fancy stuff, but I enjoy picking out goodies for them. “Something to wear” and “something to read” are still easy enough; there are never too many books or too many t-shirts from Threadless. Sometimes that One Big Gift makes itself apparent early on, and sometimes it doesn’t.

My approach, these days, is to focus on stockings. As I said, I’m not an over-the-top gifts person, I’m not super-sentimental so I am not prone to collecting, and I tend to dislike anything that’s sort of “for the sake of having more.” At this age, I just have to trust that the best gift I can give my teens (short of that coveted cash, of course) is knowing who they are, and stockings are a great way to give that to them via small items in a non-sappy way. Like… they always get chewing gum in their stockings. But my son likes mint gum and my daughter likes fruit-flavored ones. Not a big deal, but they each get what they like. Every year everyone gets a new ornament for the tree, and it has something to do with that past year and thus comes imbued with meaning. My daughter always gets doo-dads for her hair, and that’s something we’ve been doing since she was tiny. My son always gets some sort of sensory fidget (also something we’ve been doing since they were small). Everyone gets socks, and those socks have gotten weirder over the years (but that’s okay, because so have we). The year my son wouldn’t stop randomly declaring “I am… Batman!” his stocking was topped by a Dark Knight mask, and he was delighted. The stocking gifts are not expensive or extravagant, but they are a simple, quiet way to tell these nearly-adults who are working on pulling away from us that we still see and know and love them.

As for the “main” gifts, this year? It’s almost December and I’m still stumped. I’ll figure it out. I don’t know what they’ll be getting, but I do know it’s not cash, much to the kids’ disappointment. I keep telling them that cash is a great gift once you have actual life expenses, like a mortgage, but they persist in believing I’m just mean. Maybe I am, but I’m okay with that.