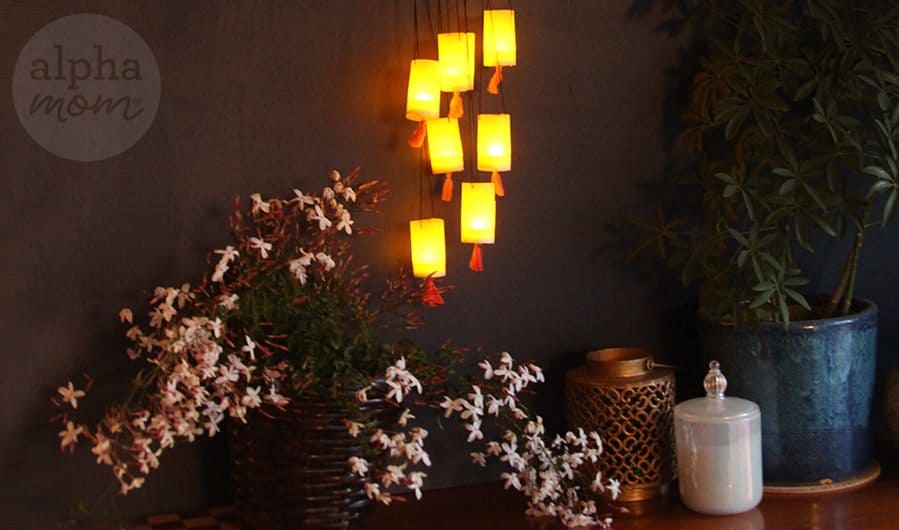 On the fifteenth day of the Chinese Lunar New Year (usually somewhere between February 5th and March 7th) many Chinese celebrate with a Lantern Festival. Children decorate colorful lanterns and hang them inside and outside of the house. Then at night they release wish lanterns into the night sky. It’s an amazing event to witness. We couldn’t release lanterns in our neighborhood for fear of fire danger so we created the next best thing: A wish lantern mobile with battery-operated tea lights! 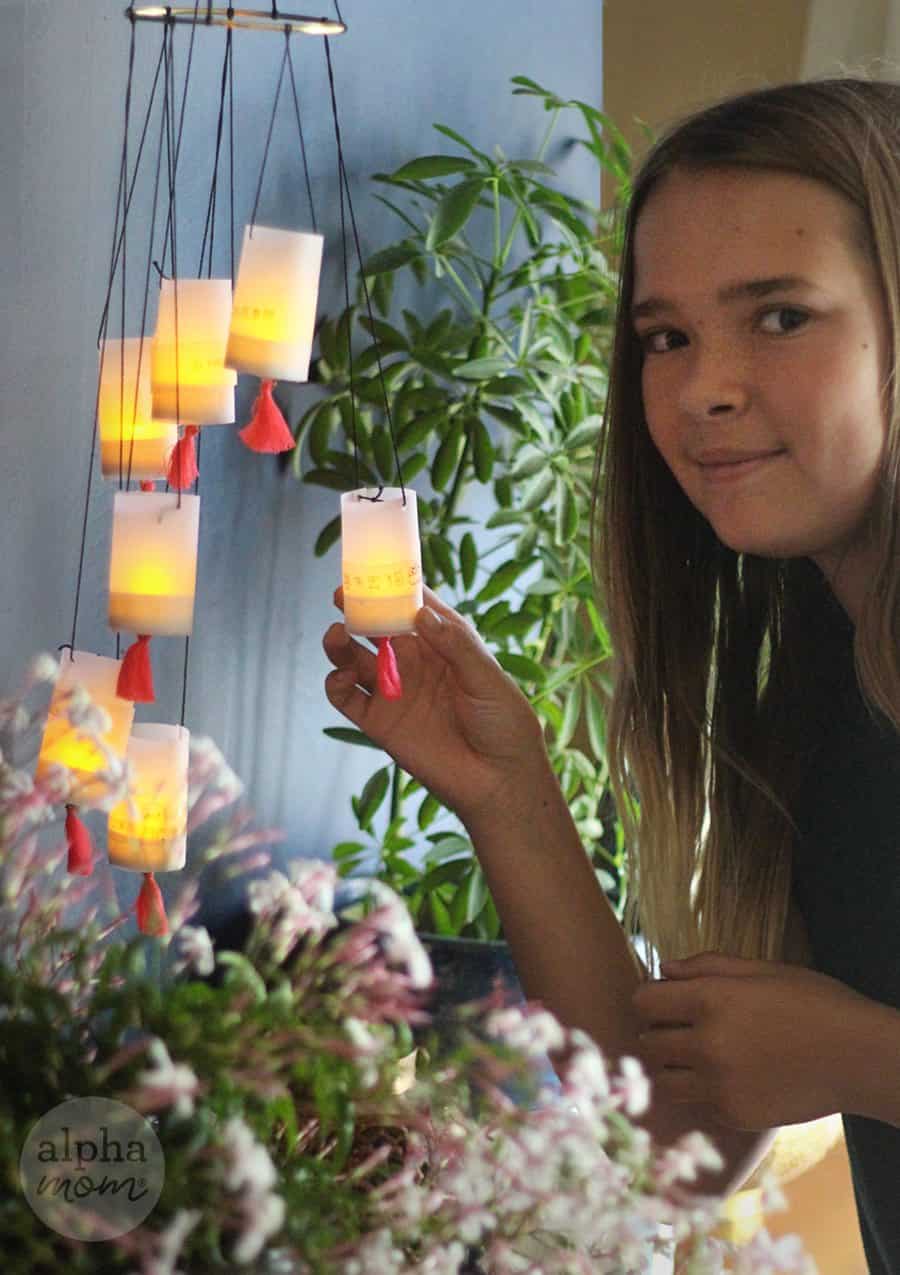 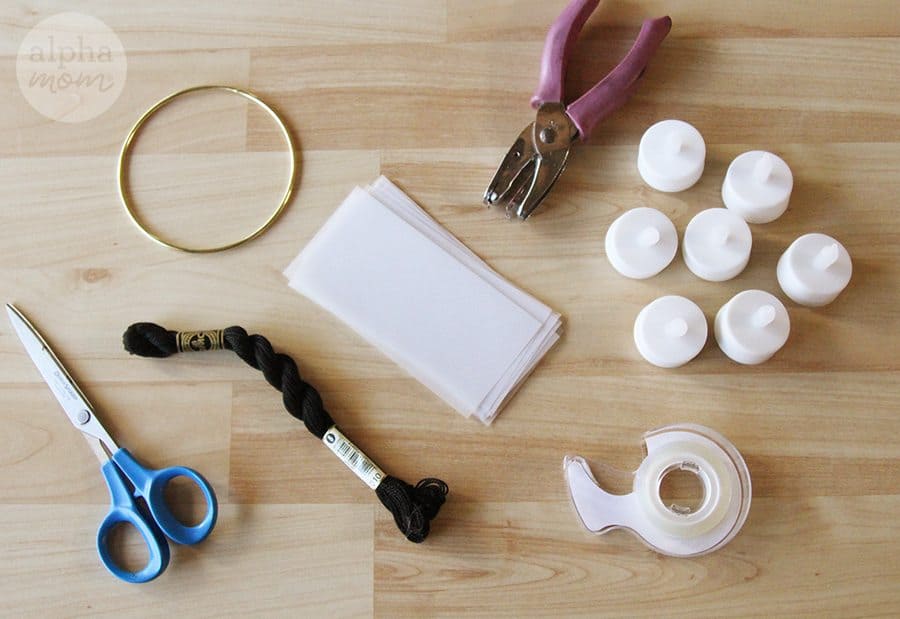 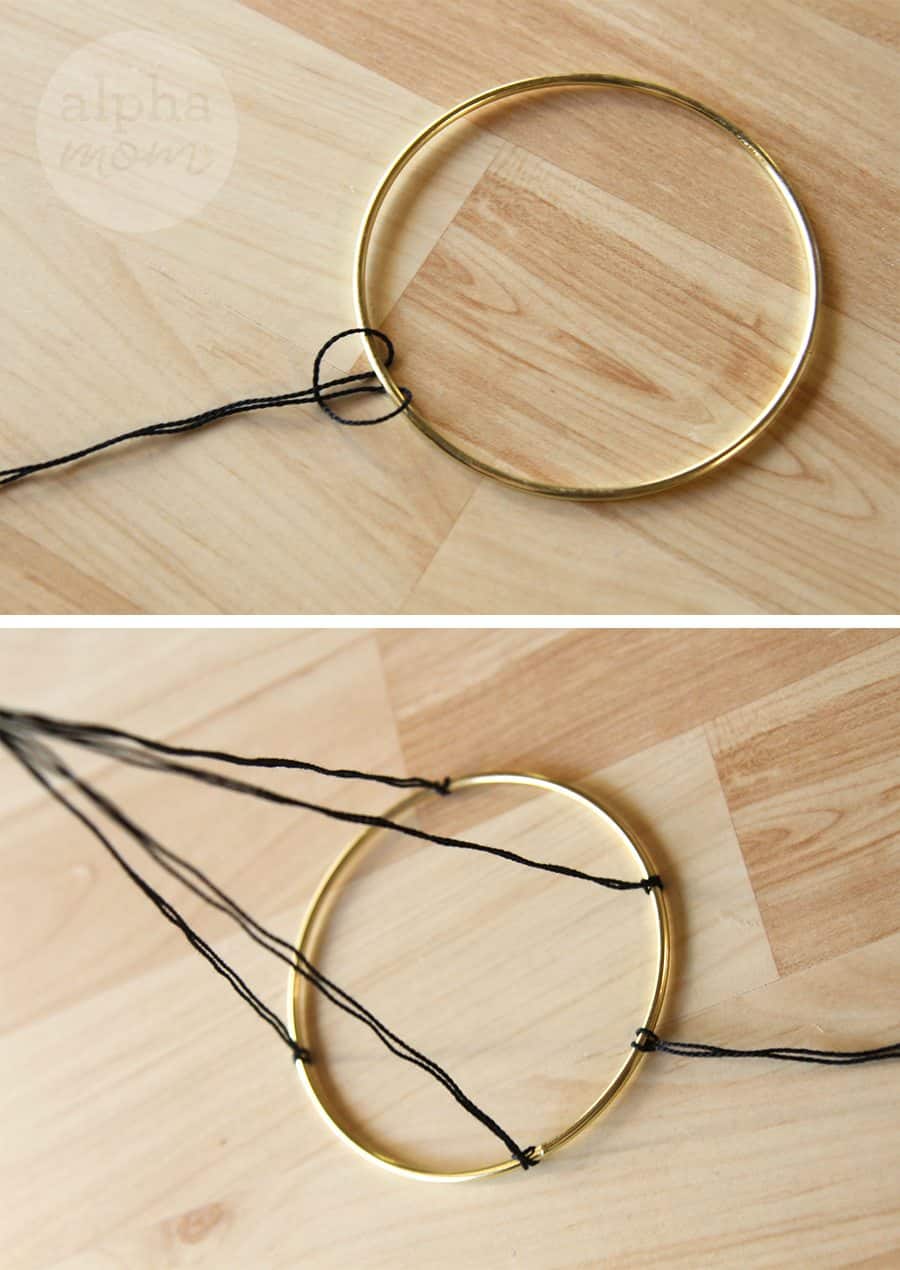 First we created the base from which our little lanterns would hang. To do this we created four larks head knots onto the gold ring with four yard-long lengths of black embroidery floss. We used black because we wanted the thread to disappear visually so that the lanterns look as if they are floating away. Then we tied these four lengths together in a knot in the middle. This is what we will hang the lantern from.

Then we created seven more larks head knots hanging down away from the four that are hanging up as the holder. Position these hanging-down lengths in between the four handle lengths going up. You’ll be able to move them about later to create balance so don’t worry too much where they go just space them as evenly as possible.

We made seven for good luck but we did some research and found that eight is actually considered luckier in China because the number eight sounds similar to the word “fa” which means fortune in Chinese. So maybe you should make eight! 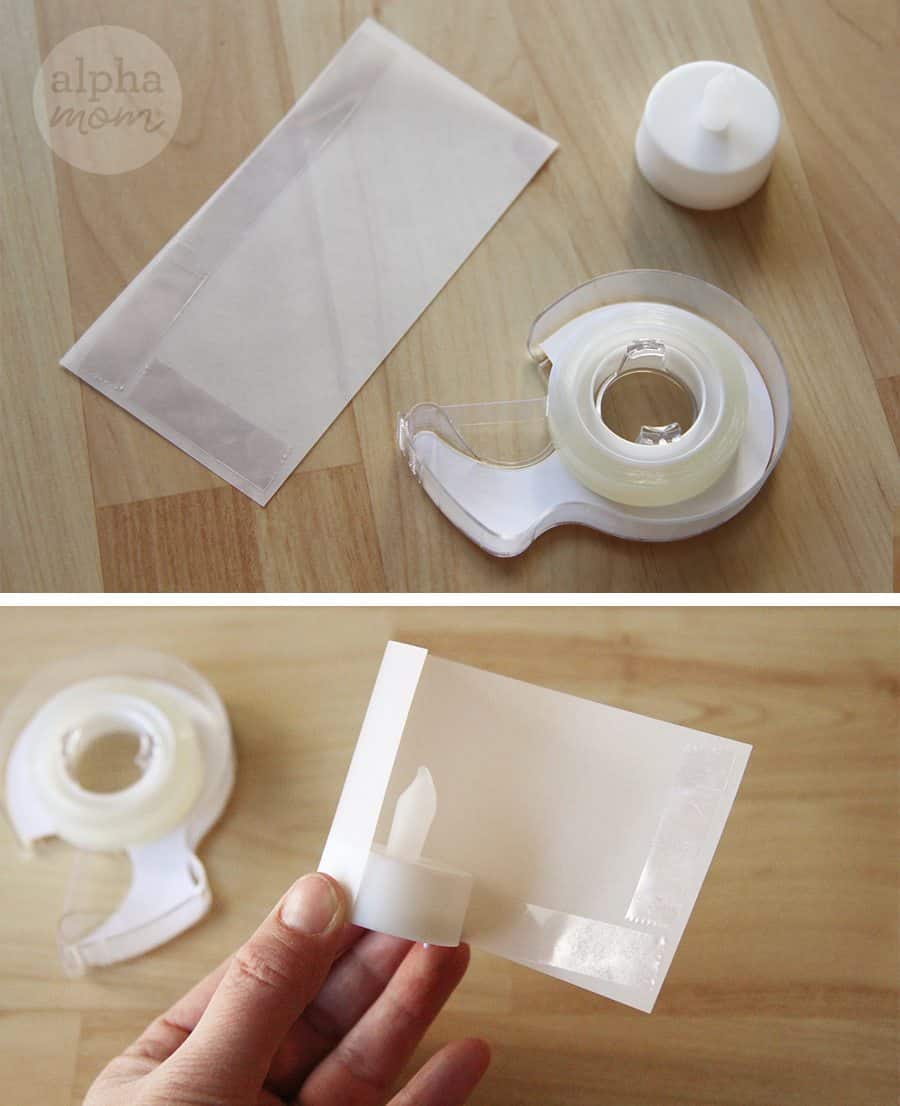 To make the lanterns, we placed double-stick tape along the base and up one side of one vellum rectangle. Then we carefully wrapped the sticky side of the taped vellum along the base of the tea light and sealed it with the taped end by overlapping the vellum just a little. 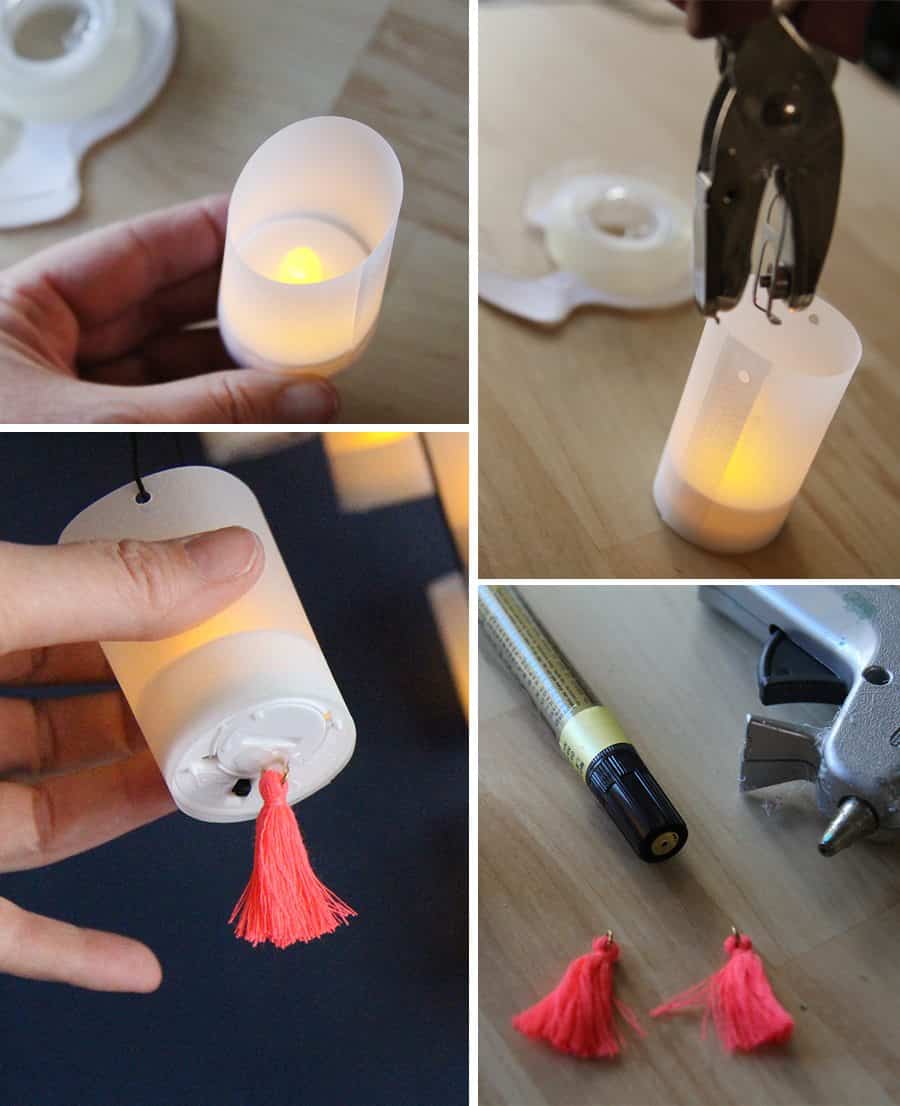 Then with a small hole punch we punched two holes near the top of the lantern on each side. Then we attached the lanterns to the gold ring by running one string through each hole and tying it in the middle like so. Make sure to stagger your lanterns up and down so that they are not all in a bunch. You can do that by cutting some of the lengths of string shorter.

We chose to attach pretty decorative red tassels at this step with a dot of hot glue but this is optional. 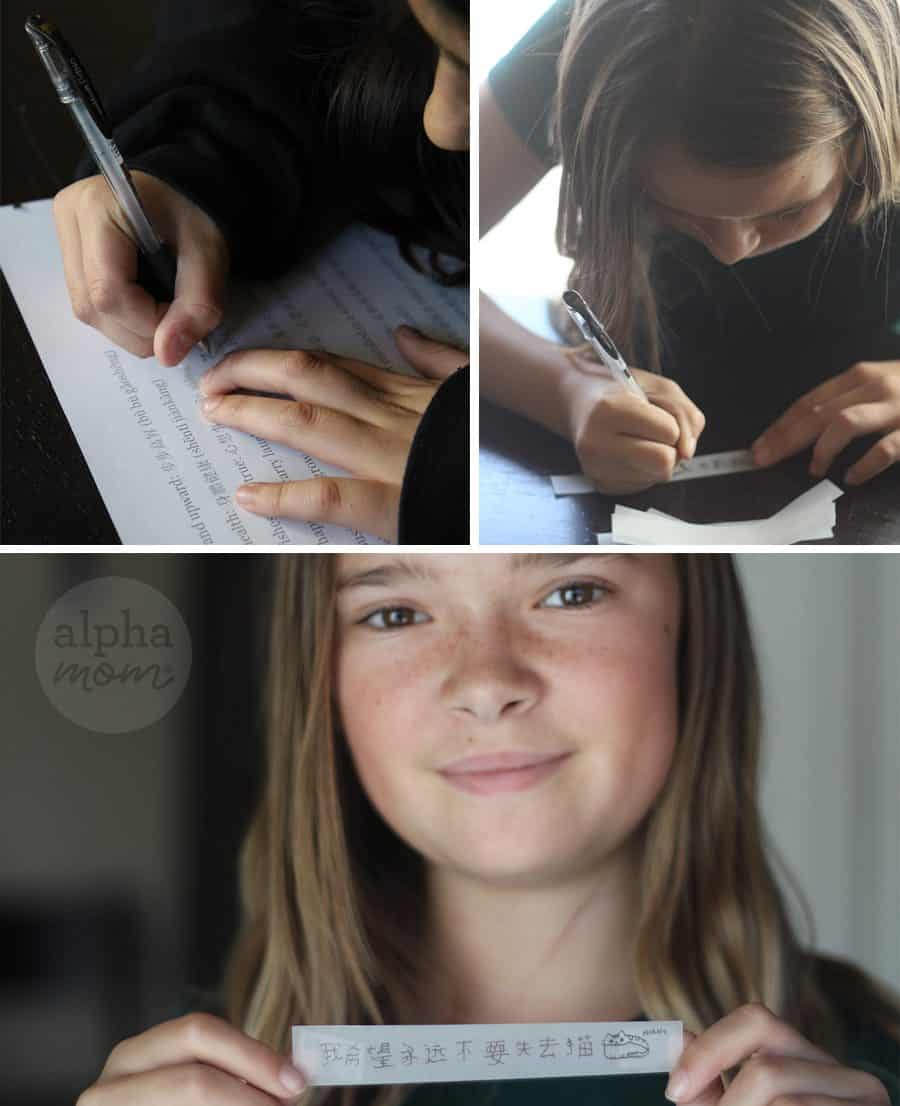 We printed out some wish messages in Chinese characters and attempted to trace them with a fine ball-point pen but you could do them in English too. Then we attached our messages to the tiny lanterns with another piece of double-stick tape. My daughter chose to write a silly message about not losing her cat but please, write anything you like. Common New Year wishes are:

May all your wishes come true!

Be happy and carry laughter all the time!

Then we waited until dusk and decorated our dining room with our new wish-filled lantern!  May the new year bring you many good wishes! 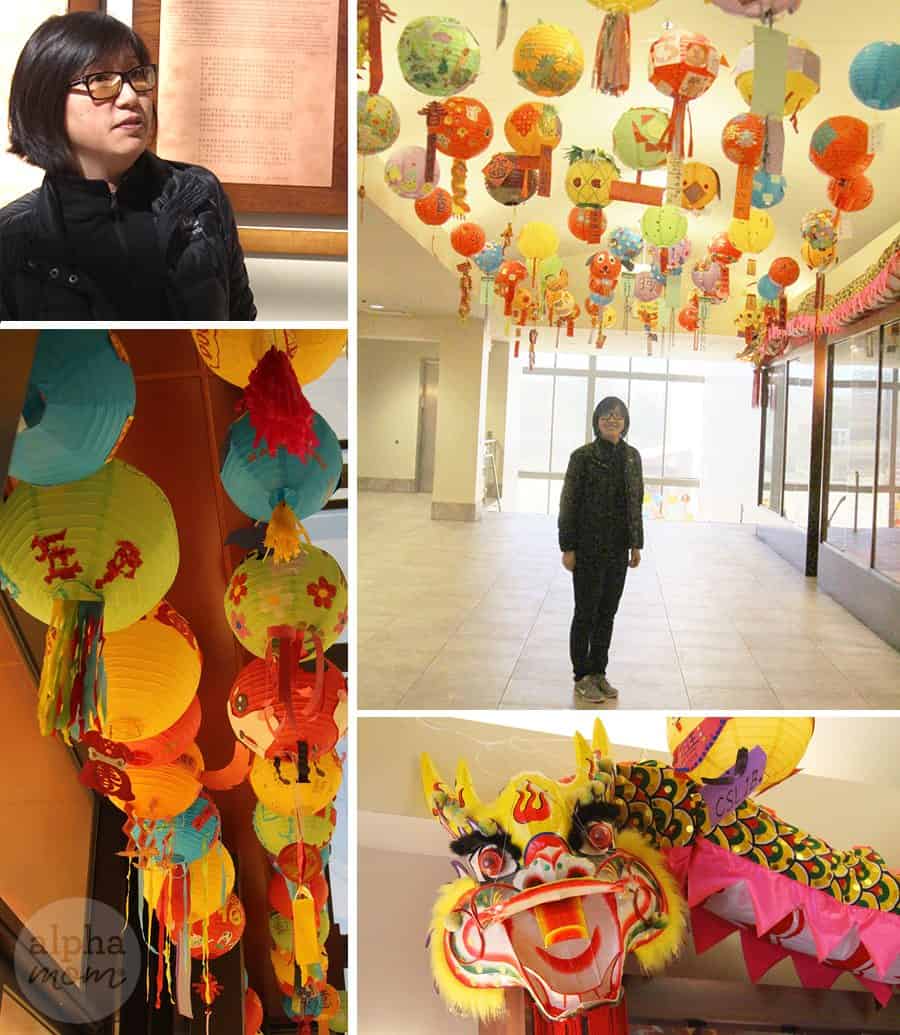 While I was researching Chinese New Year and The Lantern Festival I had the opportunity to interview a friend, Rebecca Jenkins. She told me many stories about Chinese New Year and how differently it is celebrated all over the world. Many Chinese-American immigrants have very different stories, depending on their age, what the government was like where they lived and what part of China they are from.  For example, someone from Shanghai will have a vastly different experience than someone from inland China. According to Rebecca, just like someone who grew up in the 80s in China has a vastly different experience than someone who is growing up there now.

When communism took over, many new year celebrations were shunned because they were deemed too religious and the new government wanted to cut all ties with the past.  Rebecca’s grandparents remember a time of abundance and lots of celebrating while Rebecca’s childhood memories of the new year celebrations are much more subdued. They only decorated with lanterns inside their house. The importance of family coming together for the new year was more important for them (much like our Thanksgiving). Rebecca also remembers cleaning the house thoroughly before the new year and getting new clothes that her mother handmade from scraps of fabric she bought with rations.  When Rebecca visits China today she finds it’s very different. She tells of elaborate lantern festival displays and public celebrations.

Here in America, Rebecca took me to a local Chinese School and she showed me the beautiful lanterns that all the children decorated and hung in the hall.  She even gave me some red bean rice balls that I’m saving for our own Lantern Festival this coming Friday.

If you have any childhood memories or even new experiences with Chinese Lantern Festival, I would love to hear about them in the comments! We always love to learn from each other here at Alpha Mom.