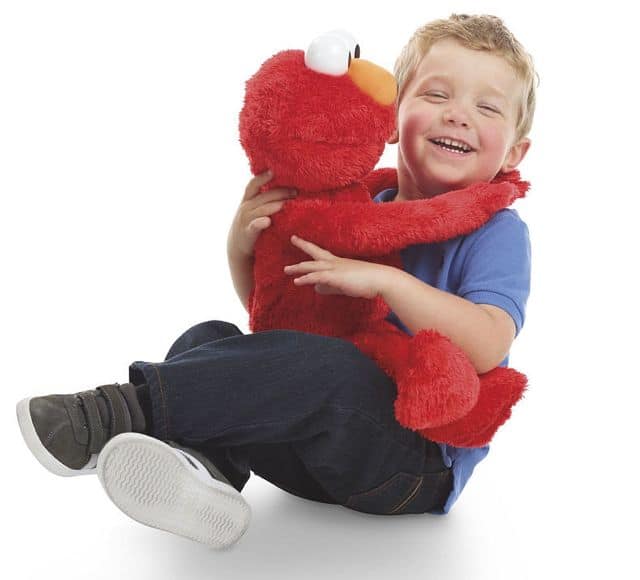 Do These “Hot Toys” Really Deserve the Honor?

Every year the big-box retailers announce their lists of the top toys for the holiday season. You know, the ones on the “hot lists” that promise to make your kids the happiest on the planet.

Last year, Furby was anointed the Hot Toy of 2012.  We tried to understand why.  In fact, three different families lived with Furby for several weeks to try to understand and not only did the kids either not care or were scared of Furby, it was universally hated by the parents.  Since then, we have come across Facebook post after post in our personal timelines where parents have complained and cursed ever having bought it.

Also, what’s up with so many retailers having virtually identical Hot Toy Lists?  That combined with Alpha Mom’s Furby experiences has led us to be more than a bit skeptical about the toys found on these Top Toy Lists for the holidays.

So how does a toy get a coveted spot on one of these lists? We decided to ask Toys R Us, a company that touts the top 36 toys of the season and then narrows it down to the 15 best of the best. According to a Toys R Us spokesperson, they chose the toys for their list based on their toy expertise, current trends, focus groups (with parents and children) and pre-sales of certain items. She insists that choosing the hot toys is an internal process, not influenced by outside parties like manufacturers. Another big retailer, Walmart leaves the list up to kids. The company had 1,000 kids (18 months to 10 years old) vote on their top picks of the season.

Well, we decided to put some of these “must-have” toys to the test and see which ones really did bring on the holiday glee.

This Elmo toy is on five of the 2013 Hot Toy Holiday Lists this year: Toys R Us, Walmart, Kmart, Amazon and Target. Currently selling for $44, this is a lot of red fur for the money. This Elmo is almost 2 feet tall. And he does actually hug you. It’s very sweet. Elmo even has a sense of humor, telling the child to hug tighter and tighter and then Elmo says, “That’s too tight.”

Elmo can either play or sleep. In play mode, he does a lot of hugging (not surprising) and singing. In sleep mode, he sings a song, starts snoring and then sleeps quietly. He looks a little freaky asleep with his arms stretched out and mouth open but hopefully your preschooler won’t notice. Requires 4 AA batteries.

The Final Word:  According to Toys R Us Spokeswoman Adrienne O’Hara, “This is a perennial favorite. We have seen Elmo continue to capture children’s imaginations.”  And if you have a real Elmo lover at home, this is an adorable toy.  But if your kid is sort of “take it or leave it” when it comes to Elmo, forget it. Spend your money on something else. All my kids (ages 3 to 9) thought this was super cute at first but then after a few minutes, left him abandoned in the corner. Sorry, red buddy.

Now if they come out with a Playskool Sesame Street Elmo Cleans Your House, I’ll be a lot more interested. 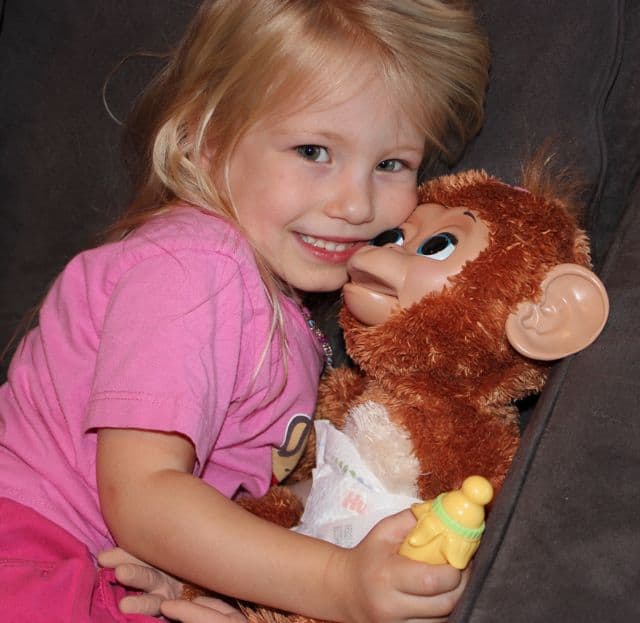 This is found on many hot toy lists (Toys R Us, Walmart, Target and Amazon) because it’s cute and it combines innovation with technology. I think this toy is a much better use of $49 bucks than the Big Hugs Elmo. As someone who begged their parents for a monkey from about age 3 to 10, I was excited to check it out. My 3-year-old daughter loves this monkey!

It’s kind of like having a little baby around. The interactive monkey moves her mouth when you feed her, makes giggles and other sounds when tickled or cuddled, says, “Whee!” when she is hung upside down and will also close her eyes and snooze when rocked to sleep. It requires 4 “C” batteries.

Her diaper will eventually fall off because you have to untape it to shut the monkey on and off but we just replaced with a real diaper. The little monkey noises can get a bit annoying so I wouldn’t take it on any extended road trips.

The Final Word: Definitely worth considering for your holiday list, especially if your child likes to play with baby dolls. There is something very real and endearing about this toy.  The print advertisements for the Giggly Monkey Pet show a girl who looks about 5 or 6 playing so happily with it but I think it’s for a younger child like 3 or 4 years old. 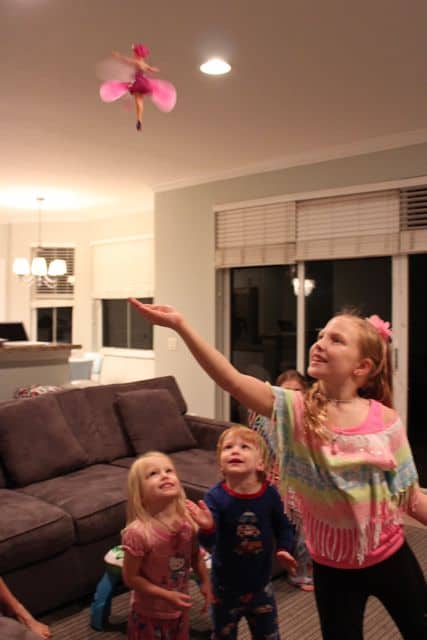 If you want that absolute magical holiday moment where your kids’ mouths drop open, their eyes glisten and smiles spread across their gorgeous faces, order this Flutterbye Flying Fairy Doll immediately.  Well worth the $28 price tag. We really couldn’t believe it when the fairy took flight. It’s very cool. Clearly deserves to be on the Hot Toys List of Toys R Us, Target, Kmart and Walmart.

Now you are supposed to be able to guide the doll with your hand but it will crash into the wall. A lot. It’s actually pretty funny but I can’t imagine this doll has a long shelf life. The wings have fallen off a few times but so far we have been able to snap them back on.

You will also have to put up with some frustration as you try to find the “on/ off” switch and figure out where to plug in the charger cord from the base. After you’re done with this unofficial eye test, your fairy can charge for 30 minutes and then take flight. The base does take 6 AA batteries, so stock up!

Final Word: This is a maybe depending on how much you need the 28 dollars. A definite “holy crap that’s amazing” moment but seems like it could break quickly. Still my kids were mesmerized by this flying fairy and say it’s one of their favorites this season. 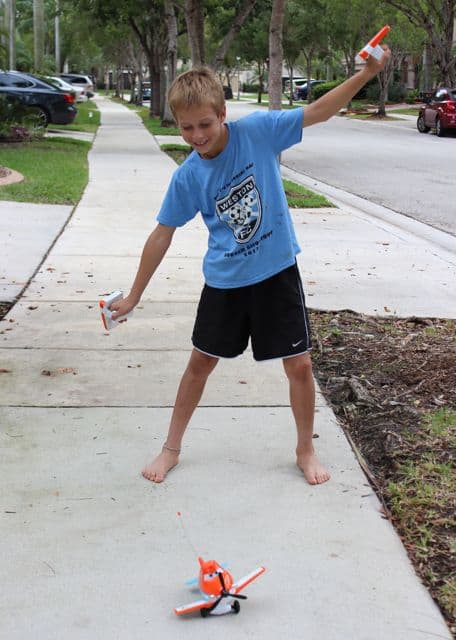 Why do toys now have the longest names ever? Do you really need nine words for a toy name? That aside, I was a bit disappointed with the Disney Planes Pilot Pals Dusty Crophopper Remote Control Plane. Mostly because I thought it was going to FLY. Like in the air. This $32 plane actually just roars around on the ground which seems more like a car, but whatever. Since we’re asking rhetorical questions, how did this toy make it on to the Hot Toy Lists of Walmart, Kmart, Amazon and Target?

This plane has lots of sounds and phrases from the movie Planes. It’s got three pre-programmed flight routes and you can also direct its movements with a RC controller you hold in your hand. As you bank left and right, so does the plane.

Final Word: I’ve never seen the movie Planes but apparently it stars this daring Dusty Crophopper. If your kid is into that, it would be a very fun toy. My 3-year-old son liked this toy for a bit but couldn’t really understand how he could control the movement of the plane. And he abandoned it quickly. You also need a lot of space to let it move around. The plane requires 4 AA batteries and the remote 2 AAA batteries. 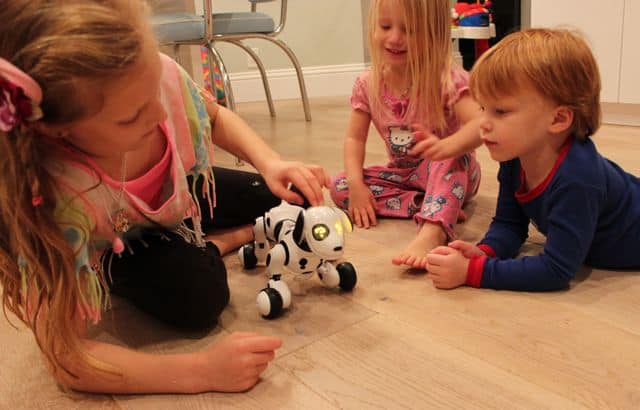 Finally a toy with a short name! So do you have one of those kids who is begging for a dog? One word: Zoomer. Despite looking more like a robot than a soft lovable puppy, this $80 toy totally acts like a dog. The technology is pretty crazy. He doesn’t run into walls and responds to commands like sit, lie down and go to sleep.

We couldn’t get him to respond to all the commands because he’s a puppy and he has trouble learning some of them. And apparently, the more you train him, the better he does! Also, according to the manual, if he’s in a bad mood, he’ll just do his own thing. Great – a dog with an attitude.

He apparently understands English, French and Spanish which is a little pretentious but maybe I’m just jealous because I want to be multilingual. If you stop giving him commands, he’ll wander around and do dog things like stretch, lie down and pee (pretend pee!)

The biggest problem is Zoomer only has a short life before needing to be charged again. Charging takes about an hour. Then Zoomer will operate for about 20 – 30 minutes. You then have to wait 10 – 15 minutes to let the battery cool down before you can recharge. And it really should come with a leash and a collar.

Final Word: If your kid is a dog lover and there is no way in hell you are getting a dog, invest in Zoomer. It’s way cheaper than a real puppy and acts so much like an actual dog that sometimes it’s sort of creepy. And yes, that’s an endorsement. 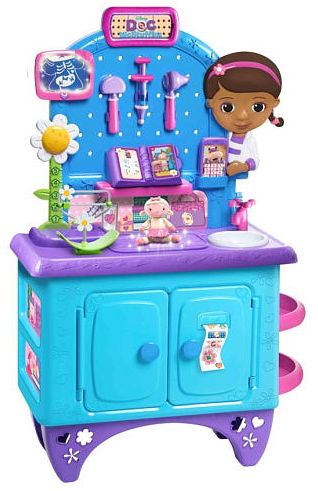 If your kid isn’t into electronic dogs, here’s another way to spend $80: The Doc McStuffins Deluxe Get Better Check-Up Center. This is another toy that was found on four of the five Hot Toy Lists: Toys R Us, Kmart, Amazon and Walmart.

One of the best toys I ever bought for my kids was a pretend doctor’s kit. Nine years in and that thing is still played with around here. So I figured this Check-Up Center would be pretty popular.

My 3-year-old son really likes playing with it. The older kids (6 and 9) have for the most part ignored it but that’s probably because it doesn’t belt out songs from Teen Beach Movie.

It comes with a lot of cool stuff like X-rays, a height checker, scale, eye chart, doctor’s instruments and stickers. The tapletop and X-rays talk and light up and there is a talking “Big Book of Boo Boos” whatever that is exactly. It is supposed to come with a lab coat but mine was missing. This Check-Up Center requires 3 AA and 2 AAA batteries.

Final Word: It’s on the bigger side so if you are trying to save space in your playroom or home, skip this and just buy a pretend doctor’s kit. It’s cheaper, smaller and your child will still spend hours pretending to be a doctor, nurse or patient. But if you have the room and your kid adores Doc McStuffins to the max, this Check-Up Center could definitely be a winner this holiday season.

These kids tablets are also found on hot toy lists this year. (The Tabeo is designed and manufactured by Toys R Us). I did a separate review of them. Bottom line, yes to the LeapPad Ultra if you’re in the market for a learning tablet for your kid(s).

Would I Pay Money For Any of These “Hot” Toys?

Yes. I think the Giggly Monkey Pet is a definite winner with the right crowd and could have some staying power once other toys have been abandoned and discarded. The Flutterbye Flying Fairy Doll and Zoomer the dog have the biggest wow factor but I just worry whether either has long lasting appeal. But if you can throw down the cash, those two toys would make for a very fun and lively holiday season.

All of these toys were paid for by Alpha Mom.