Attack of the Furby 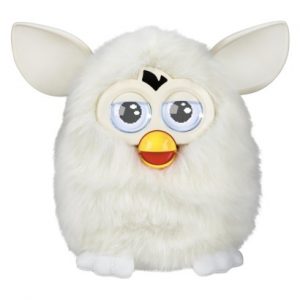 Do you want all the fun of living with an insane talking squirrel but none of the mess? Ever thought it’d be a blast to have someone scream, “I MADE COCOA!” at you in a dark house? Enjoy non-stop animal noises and impolite belching? Then get yourself a Furby, my friend!

Yes, just when you thought it was safe to shop for the holidays, the toy sensation of 1998 is back. My family has had the pleasure of living with one of these little bastar—pets for the past few weeks and I have to say, it’s been a real challenge. Sort of like living with a nasty aunt who’s off her meds and only stops talking when you push her into a closet and lock the door and throw away the key because OMG SHE’S DRIVING YOU COMPLETELY CRAZY!!

Sorry. I might be a little tense from this review.

Anyway, my boys (ages 9 and 11) had never heard of Furbys before our white one arrived, so they were super excited to try it out. I put a couple of batteries into it and boom—Mr. Furby came alive with a vengeance. Much like a zombie does after dining on fresh brains, I imagine.

I will admit that the Furby is kind of cute at first. It’s LED eyes are very expressive and it opens and shuts them itself. And it has a cute little yellow mouth that also opens and shuts. Well, mostly opens because the Furby never, ever stops talking in “Furbish.” Furbish sounds like someone’s drunk and trying to speak Hawaiian. Like “Ah-may koh-koh!” and “Kah oo-type nah-bah!” All interspersed with high-pitched giggling and moaning.

But wait—it gets worse! Just when we couldn’t take any more of that insanity, one day the Furby closed its eyes and started chanting, “Changing, changing, changing” like some dude undergoing a demonic possession.  I was seriously two seconds away from calling a priest. Then it suddenly opened its eyes and came back to life as…a Valley Girl! Of course it did. We spent the next few days listening to it yell, “OMG!” “Whatever” and “Seriously?” before it’d suddenly drawl, “Shah, me sleep-ee,” and start snoring like a freight train. I felt like it was 1990 and I was back living in the Gamma Phi Beta house. 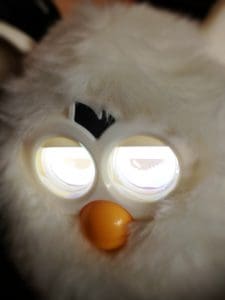 The kids and I were sincere in our efforts to have fun with our Furby and took the “How you treat the FURBY will shape FURBY’s personality” warning printed on the instructions very seriously. We petted it, talked to it, made direct eye contact and tickled its belly. We made it dance. We even tried our hardest to teach it words, but to no avail.

We also downloaded the Furby app on my iPhone so we could “feed” it various food with the swipe of a finger. Sweet food prompted a “Yum!” and a happy dance, hot sauce brought flames to its eyes and a dirty sock caused it to make an icky noise and send an image of vomit back to my phone. And that’s exactly what sealed the deal for my pre-teen boys—the Furby vomit. They spent hours making Furby send them vomit, sending the vomit back to him, then getting even grosser vomit in return. Isn’t that just adorable?

A couple of other things to note:

You can’t turn off the Furby.

My husband loathes the Furby and routinely hides it under couch cushions. 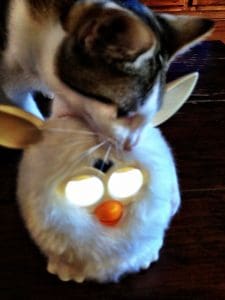 I also loathe the Furby and keep sitting on it when it’s hidden under the couch cushions, prompting it to start screaming, “NO-NOO DAH DOO-AY!” and scare the crap out of me.

Our 7-month old kitten Lola really, really loathes the Furby and wants to destroy it. A few more “What’s up, girlfriend?!?” and we might just let her.

Of course, it doesn’t matter what the parents or the cat thinks about the Furby. The most important question is: Do the boys like it? Well, when asked, they both just sort of shrugged and said, “Kinda. I guess. Maybe. I don’t know.” Then they ran off to play with something else. So for that reason, I’m going to give our Furby a vacation in the back of our closet for a while. With Lola out to get him, I think he’ll be much safer if he’s in there.

And so will we.

(Interested in additional perspectives on Furby? Yep, check out this one by Ilana who has a three-year old and this Furby review by Amalah. They too lived with Furby for a couple of weeks.)