Twitter Facebook Pin It Email Article
Prev Touchscreen Learning Tablets for Kids: The Yay to the Nay Next 8 Ways to Raise Thankful Kids 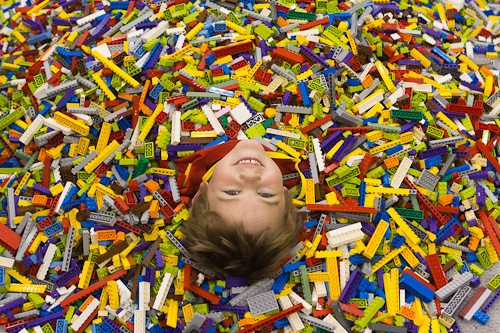 That Way Madness Lies: Introducing Legos To Your Child

I am a huge fan of your blog, your advice and your writing in general. I have a soon-to-be-5-year old (December 21st) and all he seems to want besides a clean rock (he told us this today, what?) is ninja toys (which translates to Ninjago Lego sets). Knowing how much Noah likes the show and the toys, I figure you would have expert advice. Although he’s only five (I understand they start at 7+) I think he’s ready for the smaller Legos, and he will enjoy them.

My only question is do you have any ideas on where to start? I just googled them and no surprise there are quite few options. My head is spinning. The sonic raider looked cool and so did the temple, but I don’t know if that’s my inner Lego geek coming out and we should start smaller. I don’t want to overwhelm him, but we have two indulgent grandmothers clamoring for birthday and Christmas ideas and I’m a little confused.

Also, we have a 13 month old…have you mastered a system of storage to keep Ike out of the big kid Legos?

Any advice on this matter would be great!

Oh ha. HA HA HA HA. All I can say is GET READY. Get ready to hand over all your money and clear surfaces. Get ready to never walk barefoot again. Get ready to find stray Legos in every conceivable (and inconceivable) place in your house, and to experience the sickening realization that the crackly-thump sound your vacuum just made was actually the sound of some SUPER-DUPER IMPORTANT IRREPLACEABLE PIECE, like Harry Potter’s hair or Kai’s golden weapon. Get ready to get really friendly with Lego’s (really awesome, at least) customer service and replacement part department.

Also, get ready to have a lot of fun. Because Legos are awesome. For you and your kid, and for your kid’s brain, motor skills, attention span, visual-spatial development, and all that.

But where to start? You’re right: The options are overwhelming. The age recommendations are confusing. The one Big Fancy Set your kid wants looks expensive and daunting, and in your day you didn’t have no $150 Star Wars Lego sets or customized roof tiles (ROOF TILES!), you had a big huge box of mismatched Lego blocks your mom got at a yard sale and YOU LIKED IT.

And you know what? That’s still a really excellent option. Pick up somebody’s handmedown stash at a yard sale or Craigslist. (Though considering how many kids and adults continue to build with Legos for many, MANY years, secondhand pickings can be surprisingly slim, at least compared to really age-restricted stuff, like wooden train sets or Duplo.) The sets inevitably crumble into a hodgepodge of loose pieces and parts anyway and your kids will then unleash their imaginations and re-build things however they want.

But yeah: That’s not always what indulgent friends and relatives want to hear around birthdays and holidays. So here’s how we introduced Noah to Legos around age five or so.

First, we bought a couple of the mini Creator sets. These come in nice small packages and build three different models (a truck, a plane and a tractor, for example). I would stick one of the boxes in my diaper bag and we’d work on building them at restaurants. Usually (with a little help), we could get a model finished in the time it took for our food to arrive. Then back into the box it would go, and the next time we’d build one of the other options. These sets are on the easy side but will really help lay the basic foundations of Lego building for your child: how to follow the instructions, what the basic pieces look like and how they can fit together, etc. They’re also be a good way to gauge your child’s skills, interest and attention span…and for under $10 a pop.

If you buy a “big” set for a five-year-old, let me tell you honestly that you will end up building it. Your child can HELP, but the bigger the box, the bigger the time commitment, even for an “expert” builder. This isn’t a bad thing — I personally love that Legos aren’t exactly instant gratification and require your child to work (and enjoy the work) before getting to play with the plane or castle or Super Mega Ultra Sonic Raider or whatever. But for a little kid, a 650-piece set with two 25-page instruction books, that’s asking a bit much. The Lego Creator and City lines have smaller, less-complicated sets that would probably be a better choice for a five-year old. You can get him a fire engine or a small house (or whatever you think he’ll like) to start, and build the set together. (Ezra got this car-and-camper set for his fourth birthday, and while he needed my help for the building process, he LOVES LOVES LOVES playing with it.)

But yes, it’s true. The City and Creator lines are not as “awesome” as some of the licensed or branded options, like Star Wars, Ninjago, Harry Potter, etc. And each of these lines DO offer “small” sets. Though in our experience, these little ones (typically consisting of a minifigure and some small bit of scenery), end up being fairly forgettable once assembled, and contain a lot of “weird” custom pieces that aren’t really useful. Noah insists on spending his allowance on them because they require less saving, then brings them home, builds them in about 10 minutes and then…eh. He’s finally grasping that it’s better to save and buy the set he REALLY wants, you know, the giant AWE-INSPIRING AMAZEBALLS ones.

So for a new Lego builder who wants the Ninjago or Star Wars or whatever sets but isn’t maybe 100% ready to build them him or herself, I’d recommend focusing on the minifigures. The Ninjago “spinner” sets can get your son all the awesome ninja characters (good and bad guys, ’cause you gotta have some fun bad guys to defeat, in my opinion), their cool swords and staffs or whatever the hell, and then Lego’s take on Beyblade/battle tops that can crash into each other and keep your child happily amused for quite a long time. Or however long it takes you to assemble whatever other crazy-ass giant Lego set Grandma bought him for Christmas ANYWAY, even though it said ages 8-12, but LOOK HOW COOL IT IS.

As for Lego storage and keeping them out of little toddlers’ mouths? Well, nothing is perfect. NOTHING. No matter what storage option you buy, it’s much more important that you seriously convey the importance of CLEANING LEGOS UP to your older child. Noah is usually pretty sensitive to the whole “Baby Ike might choke if you leave Legos on the floor,” but what’s usually even more effective is some good old-fashioned threatening. If your baby brother swallows your Legos, you won’t get them back until he poops them out and you don’t want to play with poop-Legos, right? Also: the vacuum cleaner. Keep your Legos off the floor or the vacuum will eat them and THE VACUUM DOESN’T POOP THEM OUT.

That said, we keep most of our Legos in a big drawstring bag that opens flat. My mother-in-law made ours, but it’s similar to something like this. The kids can open it up, play and build and have easy access to all their blocks but still keep them within a set boundary…and then it pulls back up into a bag when they are done. We also have a big plastic wheeled bin with a lid from Ikea, with smaller stackable bins inside to keep the most precious of the blocks separate and sorted (minifigures, weapons, teeny little cute accessories, Ninjao spinners, etc.). Noah occasionally likes to play with his still-intact, more elaborate sets up at the dining table or counter so his brothers aren’t bothering him on the floor. The wheelie bin lets him take his most prized Lego creations elsewhere, away from the Floor Of Lego Chaos.

Warning to anyone looking at the Lego-branded storage options on Amazon: CHECK THE PRODUCT DIMENSIONS AND USER REVIEWS. We ordered a couple thinking they were going to be these huge, awesome things and when they arrived they were LAUGHABLY small and ill-suited for our collection. And most of the bins and boxes that fold out flat into play mats do not fully close with zippers — there’s usually velcro involved and the velcro does a TERRIBLE job of holding tiny pieces in. If I’d actually gotten out a measuring tape and/or read the user reviews, I would have realized that I wasn’t ordering what I thought I was ordering. So…uh. Be ye not so dumb.