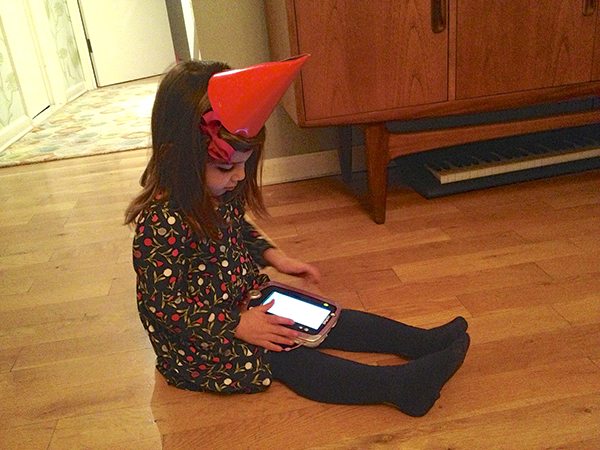 Touchscreen Learning Tablets for Kids: The Yay to the Nay

I must caveat this post by saying, my soon-to-be three-year-old daughter has been using the iPad since she was about 18 months. She caught on to that skinny black wonder of technology faster than any other milestone achievement.

By two, she could navigate to YouTube on the iPad, locate her favorite shows and use those shows to find new shows. It was a little scary, honestly.

Since then, we have realized a lot of the pitfalls of exposing your child to a technology that also has access to adult content. And even though we have placed many limits on her usage, it has been hard to get our daughter to stick to games instead of watching the iPad like a television. Or keep her viewing choices relegated to the PBS Television app, rather than using her preferred choice— the endless stream of video content on YouTube.

When she started, we put a few Sesame Street videos under “favorites”, never considering how easily she would be able to access content other than our intended choices for her. Every video she plays, she is given a list of additional options on the right. If she is watching a Dora the Explorer video, the choices may contain anything from another episode to a video of Dora talking on the telephone to the voice of an irate Alec Baldwin yelling at his daughter. An innocent video of Barney can lead to a video of Bart Simpson gunning down the purple dinosaur with a machine gun. And so forth.

But, the games on the iPad (when she plays them), are amazing. She has learned a lot from spelling apps, drawing apps and ebooks. The iPad is always really intuitive with little loading time so the technology  never gets in the way of her learning experience.

I was curious to test out other children’s learning tablets on the market, specifically the LeapPad2 from Leapfrog and the InnoTab 2S from VTech, to see how they compared to the iPad and if I could convince Mazzy to use them instead. At the very least, I could then keep the iPad for myself.

Here is what I found… 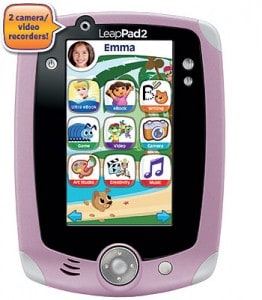 The new LeapPad2 is smaller than the iPad, with more plastic around the screen, making it easier for little hands to hold. It works both via touchscreen and with an attached stylus, although both Mazzy and I found it a little confusing to know when to use which. It’s got five buttons on the face of the screen— the power, the home button, a directional button and two volume control buttons. This is important for one big reason— when Mazzy gets frustrated with the iPad, she knows to press the home button to reset. On the iPad, the volume control and power buttons are hidden on the side so she has never tried to touch either of them in the two years she has been playing with it. This is a problem because as soon as Mazzy experiences difficulty with loading time or gets tired of a game, she starts pushing random buttons which often results in the tablet being powered down altogether. And, as far as the volume buttons, I like being able to control those myself as opposed to her having access to them.

The LeapPad2 has pretty decent loading time although it’s not nearly as quick as the iPad. It comes loaded with icons for music, books, and games but you have to download apps from your computer to have a library of stuff to play with. The only game that comes pre-loaded is PetPad which seems pretty dumb to me, but Mazzy seems to like it. There are also five free games that you can access when you first hook up your LeapPad to your computer, which is a good thing since games for the LeapPad often cost upwards of $20— a number that is unheard of on the iPad where most games are usually somewhere between $.99 -$3.99.

The graphics are also not nearly as pleasing to the eye as they are on the iPad, although there are a few games like Leapfrog Letter Factory ($25) that come close. There is also a camera that shoots both low-quality photos and videos but Mazzy was not that interested.

The first day of playing with the LeapPad2, Mazzy was very frustrated because she had to learn a new technology that was not nearly as intuitive (both with the hardware and with the game controls) as her precious iPad. At one point, she flat out refused to touch it. But, after a few days she came around and began to like a few of the games.

Cons: No wireless capability so tablet must be plugged in to your computer to download games (although this is also a positive since your child has no way to download games on their own), not very compatible with Apple computers, games are very expensive

Verdict on the LeapPad2 from LeapFrog: OKAY 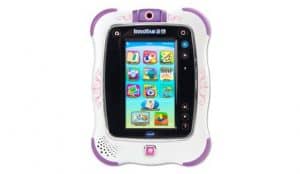 The InnoTab 2S is larger and bulkier than the LeapPad2 making it look more like a kid’s toy. It has eight buttons on the front including the power, home button, camera, brightness, wireless connection, help button and two buttons for volume control. I bring this up again because Mazzy immediately starting hitting all the buttons when something went wrong or didn’t load fast enough. Thus, she was frequently powering down or even worse, hitting wireless connection which paused the entire screen while we waited for a very slow-loading connection.

Although it’s great that the InnoTab 2S is wireless so games are downloadable with out hooking it up to your computer, I think that is also the thing that is makes it so slow to load each new screen. The screen often goes from a set of choices to a plain black screen to a loading screen to the actual game— all of which is done in complete silence and makes you think the tablet might not be working or has shut-off my accident. If this is frustrating for an adult, you can imagine how it would feel to a soon-to-be three-year-old.

The InnoTab comes loaded with with a camera, an art studio, a video recorder and also folders for things like ebooks, music and games. In addition it comes with a calendar and a notepad, and I admit, I got a special thrill out of seeing Mazzy actually type her name successfully for the first time. There is also a Wish List Maker, in which your child can select games or books that they want to download and then send the wish list to their parents. This could be either a good thing or a bad thing.

To be honest, Mazzy did not spend much time with the InnoTab 2S because the slow load time was too frustrating and she was well aware that there were other options in the room. I tried to use it to give it a fair review and I found myself quickly growing frustrated with it too.

VERDICT on the InnoTab 2S by VTech: NAY

Obviously, it is much better for Mazzy to play with a learning tablet that focuses exclusively on children’s content with no access to anything that resembles television. But if your child is already used to using the iPad, it might be a tough transition for them to make and will involve a lot of hand-holding. Unfortunately, that means you will have to spend a significant amount of time with the children’s learning tablet as well, which if you are a card-carrying Apple fan like I am, means it won’t be much fun for you either.

I find it interesting that the most advanced of the tablet technology is actually the only one that can be used successfully by younger children. At almost three-years-old, Mazzy still seems too young to use either of the children’s learning tablets successfully, but had no problem with the iPad starting at a very early age. Although, I guess that also speaks to the interactivity of the children’s learning tablets as opposed to the more passive options available on the iPad.

Ultimately, I am determined to get Mazzy more and more familiar with the LeapPad2 in the hopes that becomes her tablet of choice. But I imagine she will probably end up using a combination of both.

As for the InnoTab 2S by VTech, I hope to never touch that thing again.