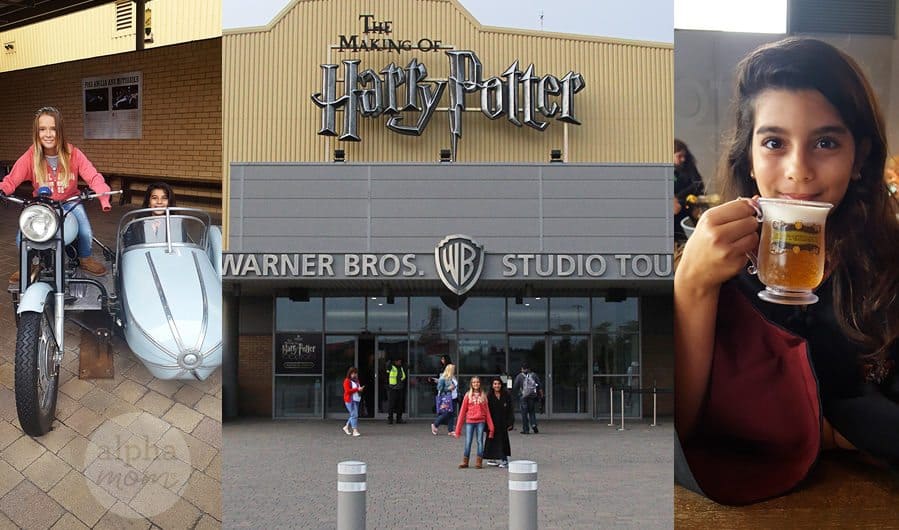 Studio Tour of the Making of Harry Potter (London)

Warner Brothers Studio Tour of the Making of Harry Potter is by far one of the most magical and engaging tours I have ever taken. Whether you are a raging Harry Potter fan or just someone who likes to see the inner workings of movies and learn about behind-the-scenes secrets, this tour is well worth the money. And kids LOVE it. Need I say more?

Yes, I do need to say more. There is so much to say!

What You Need to Know 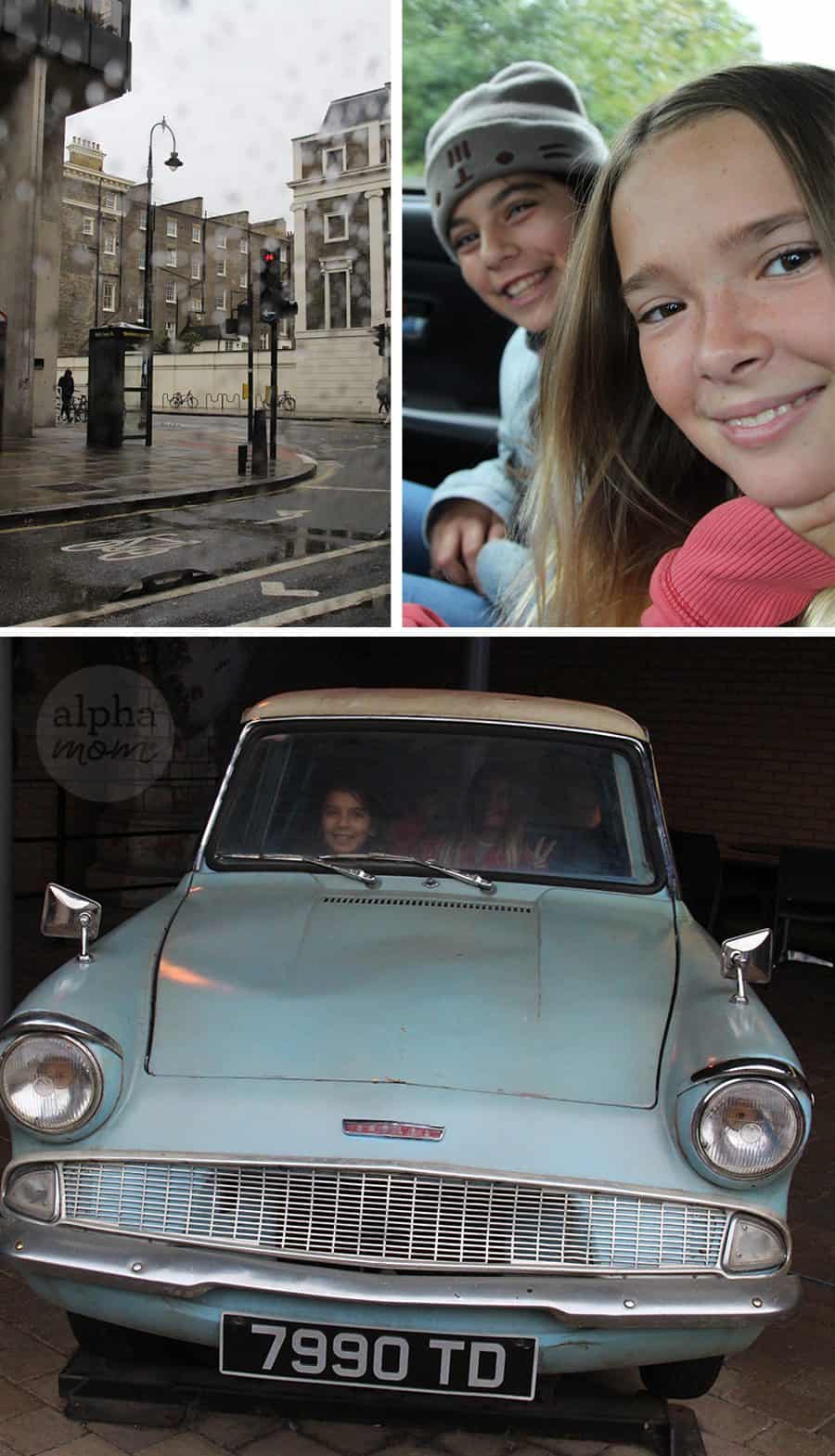 1. The first thing you need to know about visiting The Warner Brothers Studio Tour of The Making of Harry Potter is to book ahead of time. This attraction is wildly popular (with good reason) and tickets go quickly. Get your tickets online here.

2. The second thing you need to do is research how you are going to get there.  The Studio Tour is located 20 miles north-west of London.  If you are staying in Central London, like we were, you need to allow lots of time for traffic.  London can get very busy during certain parts of the day and what you thought might take you 45 minutes by car could take you up to two hours! So plan ahead and take public transportation when you can. Here is more information about traveling to the attraction via various methods of transportation.

3. Watch the movies back-to-back  (and read the books if you have even more time) before you go, if you can, because you will bewildered how many details you didn’t realize you’d forget!

4. You’ll want to make sure you’ve saved up plenty of extra funds for souvenirs. Everywhere you turn you will be charmed by Harry Potter merchandise that suddenly realize you need. A cape, a wand, a headband from your favorite house, jewelry in the shape of your favorite characters, sweatshirts, ties, stuffed animals, the list goes on and on! The multiple gift shops rival Disneyland and are swarmed with visitors throwing money at them. The Harry Potter Swag game is strong.

Don’t be discouraged by all the capitalism though, there is a reason there is so much to buy. Everyone loves Harry Potter and wants to take a piece of the magic home with them. Harry Potter fans span the world over and hundred of thousands of them throng to the Studio Tour each year. Never before has a children’s story brought so many adoring fans together like JK Rowling and Warner Brothers was paying attention.

5. Warner Brothers spent ten years making eight Harry Potter movies and it shows. Ten years! The actors in the movie literally grew up inside the five warehouses that Warner Brothers built to house the movie and all the workshops needed to create the movie. After the movie was finished they converted those warehouses into a wandering tribute museum to not just the actors in the movie (that we so often see in the limelight) but to the vast crew and many artists that worked on the movie. Every aspect of the movie is explained and featured. It’s really astounding.

6.  The Warner Brothers Studio Tour of The Making of Harry Potter is nothing like the Universal Studios Wizarding World of Harry Potter theme parks in Orlando and Hollywood. (And, that’s the sixth thing– and probably most important– you need to know). Instead, this attraction is a more like an interactive Harry Potter museum (a FUN museum!), where you and the kids get to appreciate the real sets, costumes and props used in the films. Also, you get to listen to inside stories from the crew and artists and actually understand all the hard work that went into creating magic on screen. Fun and educational!

7.  There is something for everyone at every age! Whether you are an adult fan who’s read all the books (or maybe you’ve never even cracked one open) or even the littlest wizard wielding a sparkly wand there is so much to look at and do, no one will get bored. Small toddlers might find some of the twisting, low-lit paths through the fake forrest frightening but they could easily be cuddled by parents and shown where the wires are and how everything is fake. 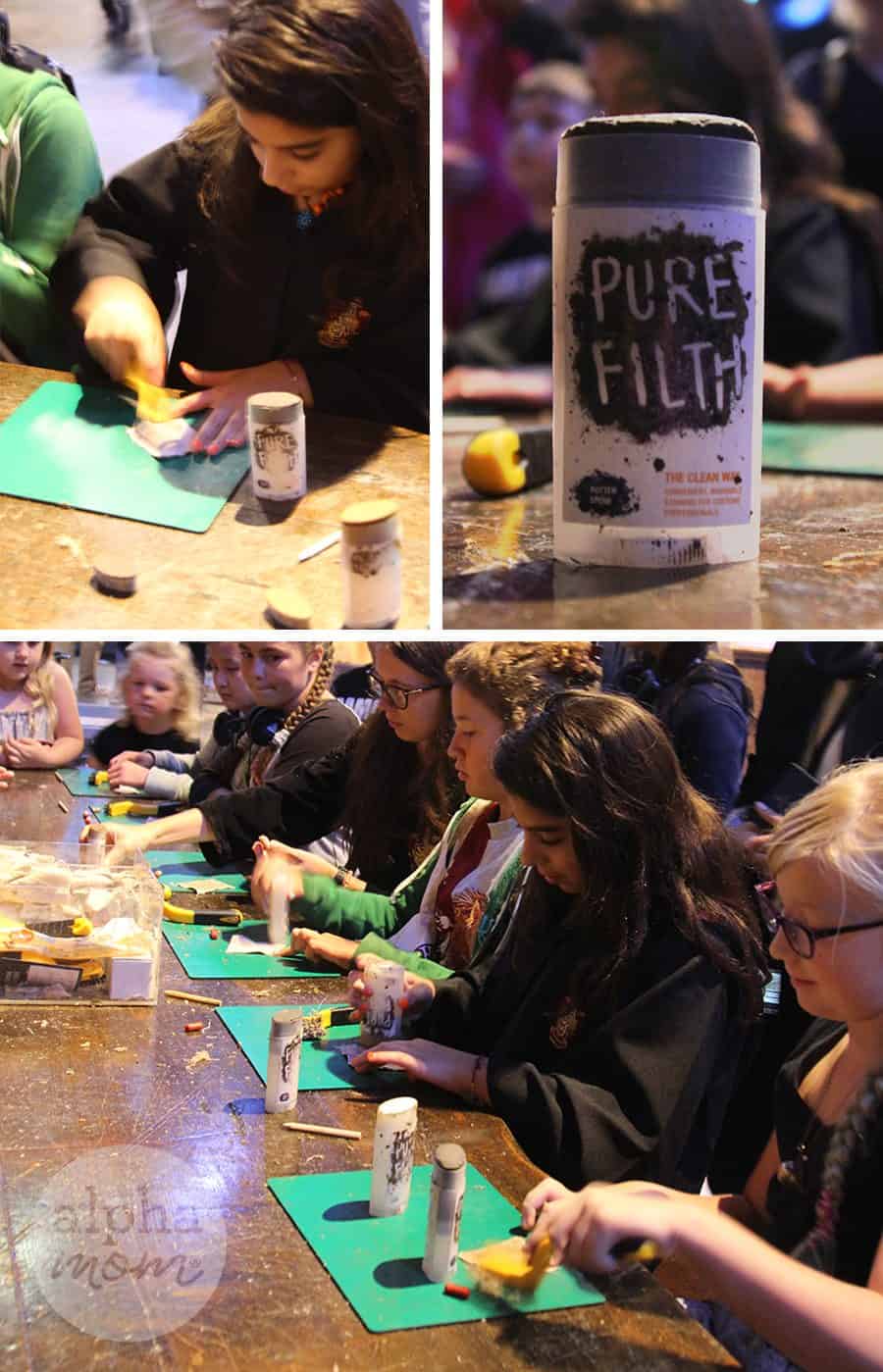 1. Harry Potter Costumes. The costumes were a special feature when we visited. They even had a long table where children could learn how to distress fabric so that it looked worn and weathered. Tubes of “Pure Filth” that looked like brown deodorant were available for each child to use. Then they were encouraged to think of a story about a certain character and make the costume fabric look like what that character might look like had he fallen off a broom into the dirt and brambles or even been attacked by Death Eaters. It was a really fun exercise that I might try at home for Halloween Costumes. 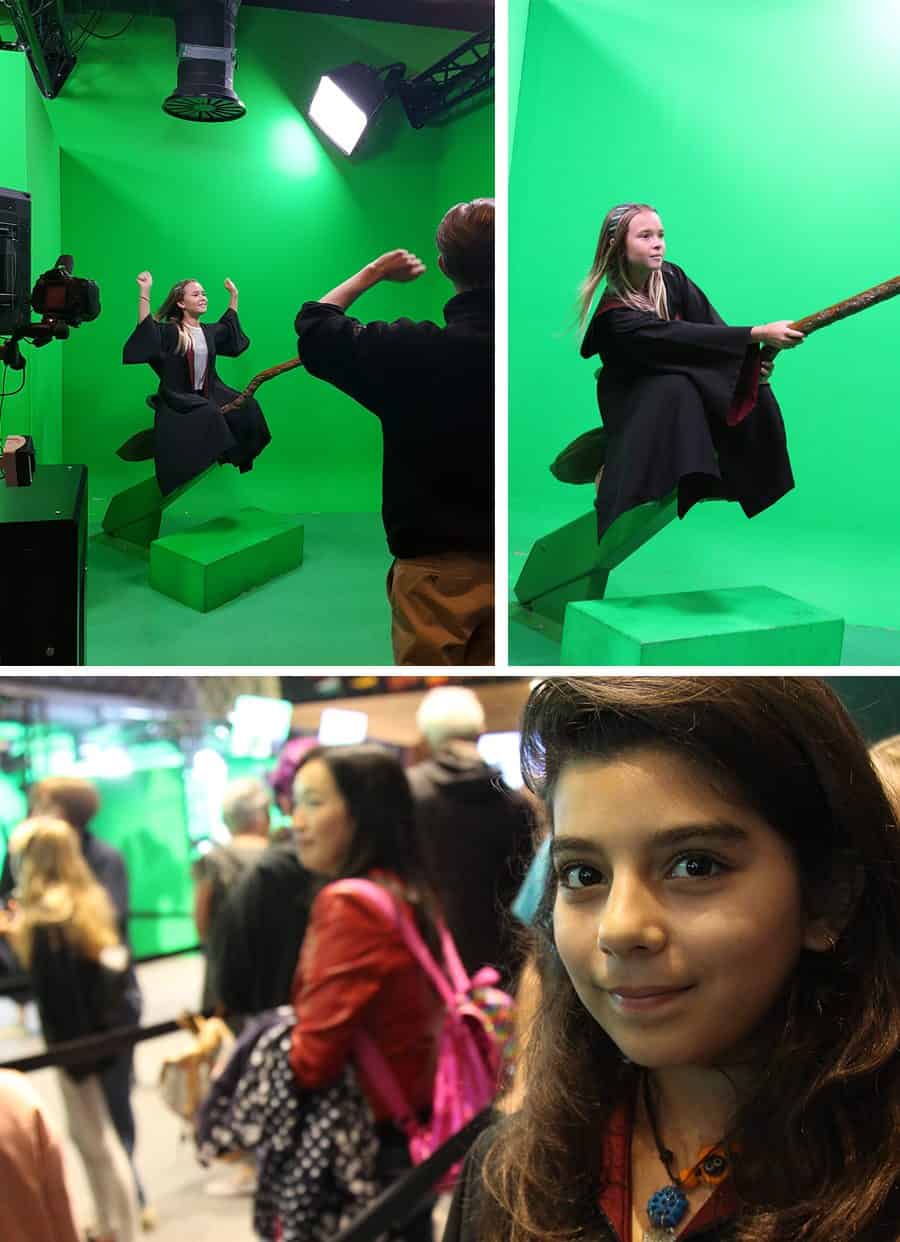 2. Green Screen Flying. Besides all the hands-on interactive crafts and tour guides available to explain and help with learning about the movie, there are also plenty of chances to experience green-screen acting. Here’s a secret: Acting in front of a green screen is a lot harder than it looks! Just because someone directs you to act surprised or to reach down and touch some imaginary water doesn’t mean you are going to actually look like you are surprised by a lightening bolt hitting you in the back of the head or that you are riding your broom over moonlit waves. It was really fun to see how things played out on screen when the movie backgrounds were filled in. We pretty much decided we’ll keep our day jobs.

3. Look for the Details. What is most impressive in this tour is the incredible attention to every detail. Behind-the-scenes professionals who worked on the movie was featured in some way and you really got a feeling for how much work went into the movie, day in and day out, to make such an incredible film. From how the kittens were animated on Professor Umbridge’s vintage dishes to how many stunt animals played Fang (There were nine and almost all of them were rescue dogs by the way!)…nothing is overlooked. I really got the feeling that this crew and staff were one giant happy hard-working family. You can breeze through the exhibits taking everything in at a glance or you can crawl at a snail’s pace reading every inscription and story. It really is up to you and how much you want to learn. 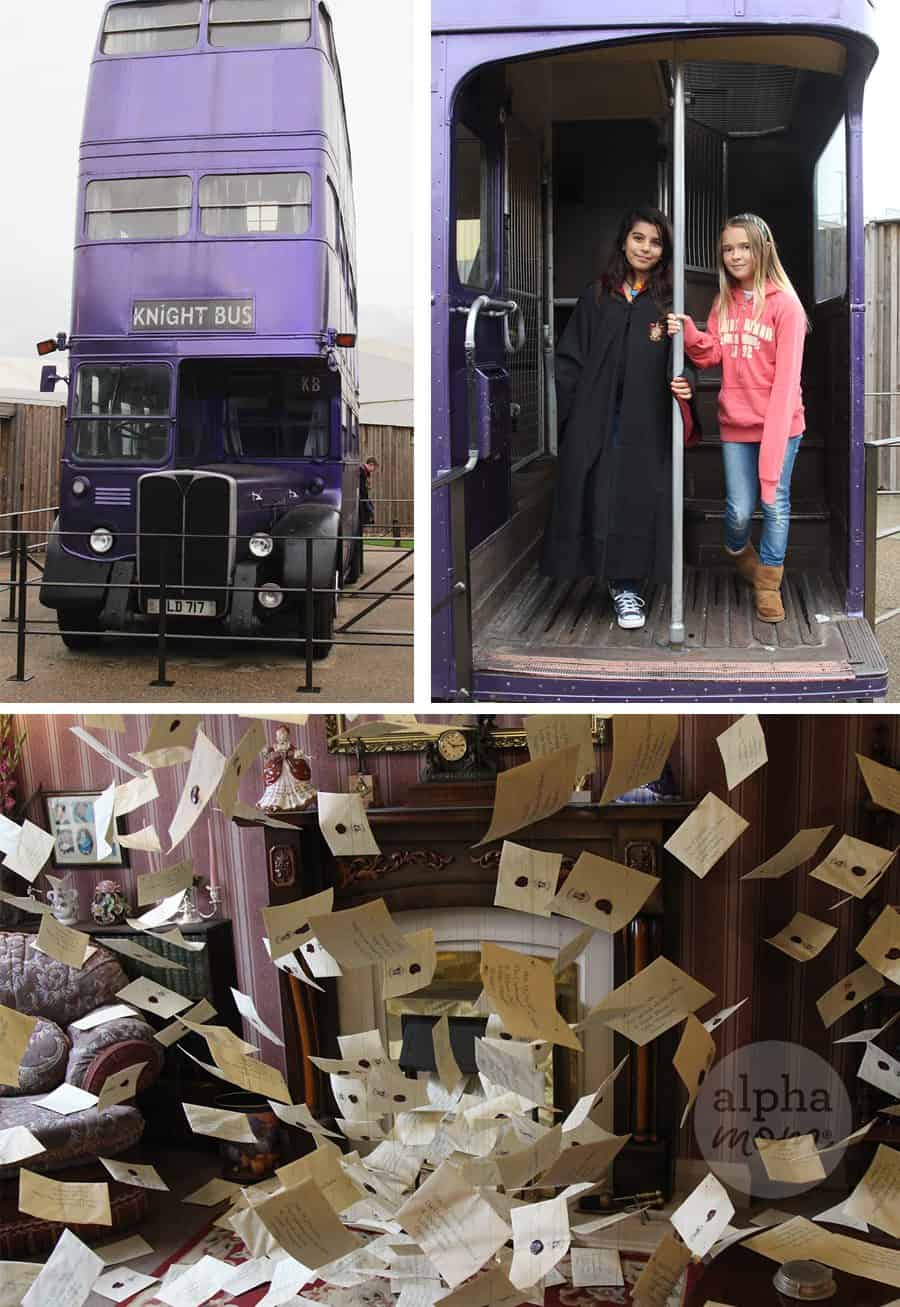 4, 5, 6 & 7. Outside the warehouses after you exit the Backlot Cafe (which we’ll get to later) you can actually walk through the front door of a the movie set used to depict 4 Privet Drive where Harry Potter spent the first years of his life. You’ll walk past his living room and see all the envelopes flying (hung by string) out of the Dursley’s fireplace and of course Harry’s famous cupboard under the stairs (though you can’t go inside. There is a better model at the beginning of the tour that actually shows the inside of his cupboard). Also outside you can climb on The Knight Bus and take a picture on the back landing or walk across the long twisty covered wooden bridge to Hogwarts that was added to the film for special effect. And of course you can climb inside Mr. Weasley’s flying car (sadly stuck to the ground) and Hagrid’s motorbike and sidecar. All great for photos!

8.  Of course you can’t miss the Hogwarts Express and Platform 9¾!  You can pose pushing your luggage through the brick wall at the famous Platform 9¾, walk through a railway car and even interact with a Death Eater while you sit in a sound stage with your family and the imaginary countryside whizzes by through your window (another green screen experience). You don’t have to buy the pictures of yourself in the green screen experiences but you might want to bring money in case you impress yourself with your acting abilities. Definitely bring a camera so you can take your own pictures.

9. Last (but not least!) you’ll want to spend extra time with the “crown jewel” of the tour: a 1:24 scale model of Hogwarts Castle. In a room lit by spooky blue moonlight (or sunlight if you stay for the full four-minute day-to-night simulation), you can walk around the 50-foot model and examine inch by inch the work that took 86 artists to create. Small interactive screens are positioned around the castle that you can touch and watch videos about special features of the castle. Everyone will love taking family photos in front of the castle and peer into the tiny windows and doors. There are greenhouses and tiny plants, real hinges on every door, and twinkling lights that come on as it gets dark… it’s breathtaking. 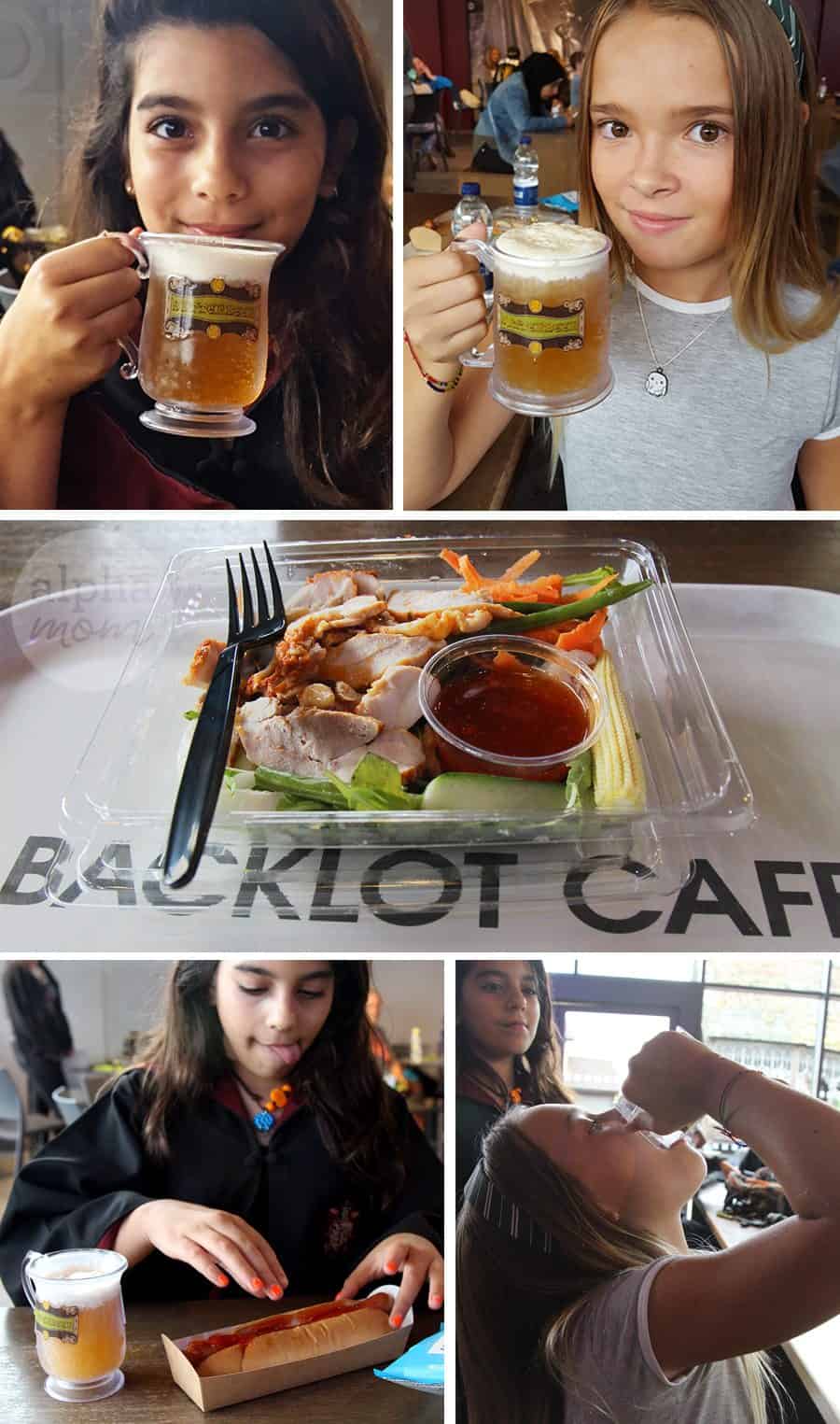 Which brings me to an unexpected delight of the tour: our family dining experience. There are two cafes. The Studio Café is located at the beginning of the tour in the lobby next to Starbucks. If you get in early you can get a coffee or tea and a pastry along or a sandwich and pick from a surprisingly large selection of fizzy drinks.

I recommend stopping for lunch at the Backlot Cafe that is located halfway through the Studio Tour. There is a lot of seating (great for big groups if you need a place to meet up) and cafeteria-style cafe offering a variety reasonably priced entrees.  Probably the biggest feature of all that all the kids will be begging for at this point is the Butter Beer (in souvenir cups!) and Butter Beer ice cream. 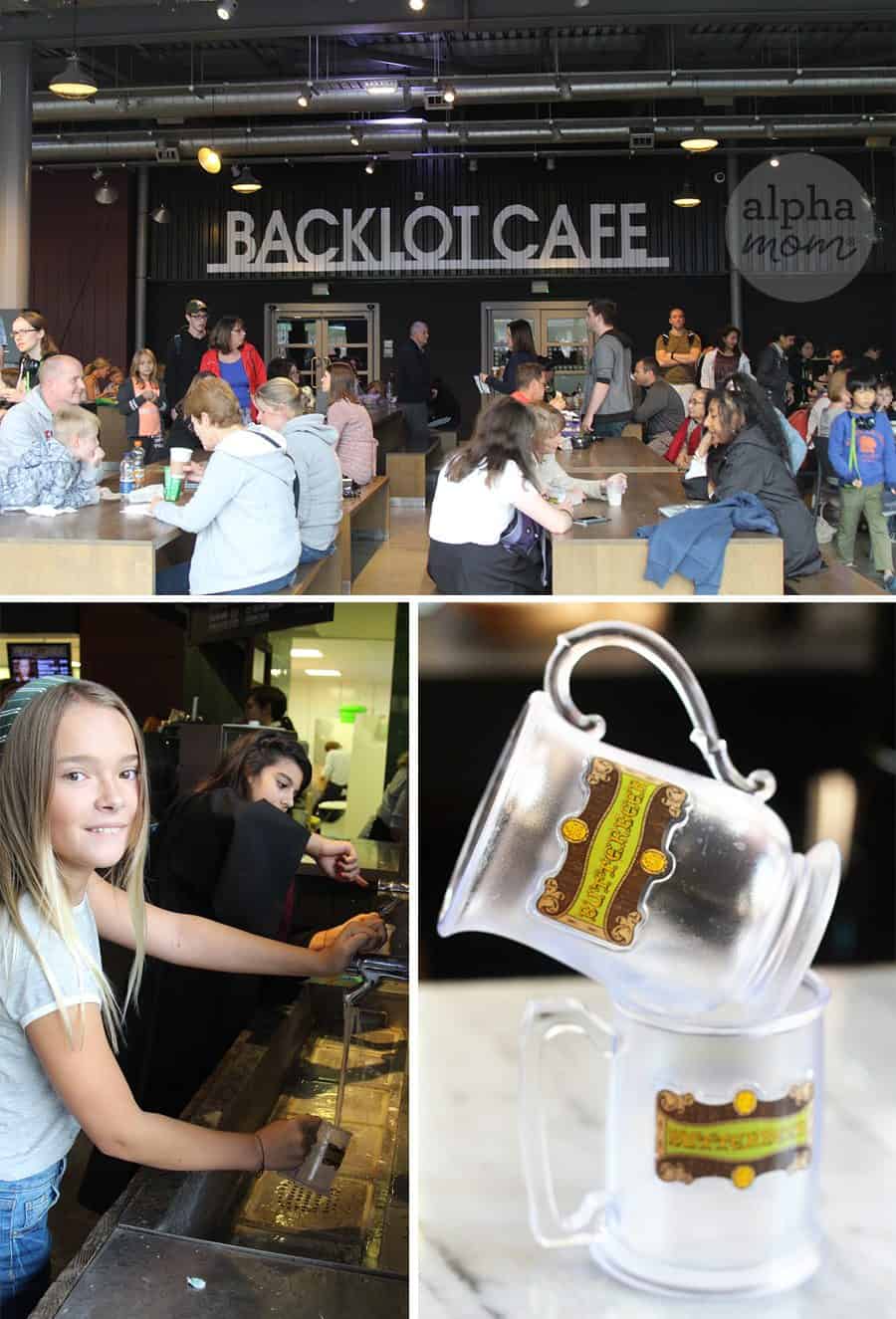 I especially loved that there was a special washing station so we didn’t have to take home sticky souvenir cups. 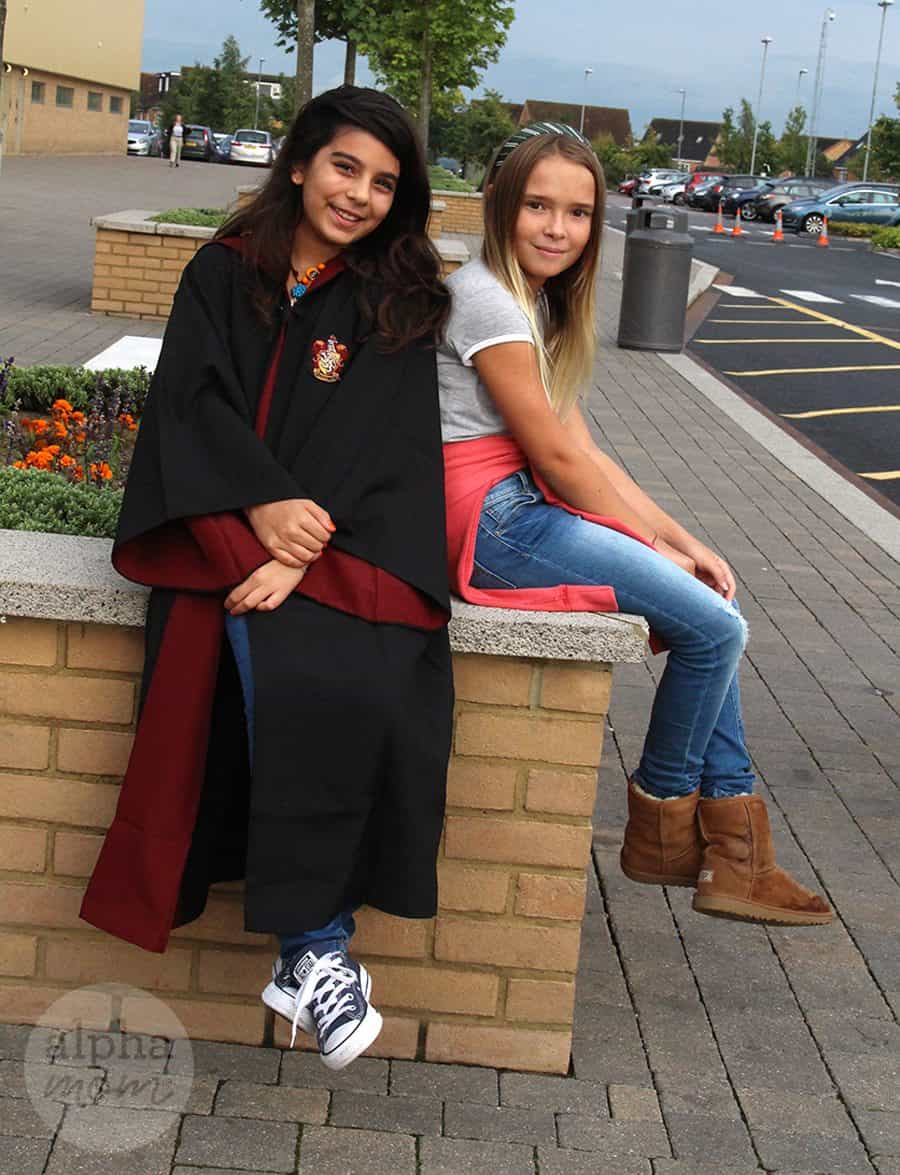 All in all, The Warner Brothers Studio Tour of The Making of Harry Potter is an amazing experience and we spent a little over two hours from start to finish on it (not counting the time we spent in the gift shop)! That’s a long time but you are allowed to stay as long as you like (like in a museum– which is great!). Legend has it that someone spent fourteen hours on the tour. We aren’t that hardcore but I can definitely say you get what you pay for on this tour and my opinion is that it is money and time well spent.