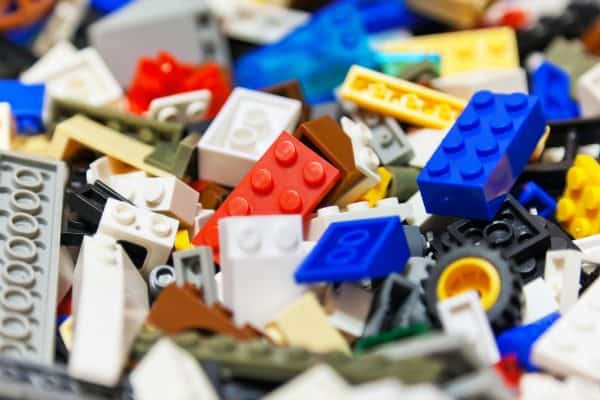 Let’s talk LEGO, can we?

My six year old has a cyclic obsession with LEGO. Sometimes he adores them. Sometimes they sit in his room forever, untouched. For a long time they just sat all over his desk. Making it impossible to use his desk for any writing or crafts or anything. And when the LEGO was all over his desk, it was mostly untouched. So I am trying to fix the LEGO storage to make it more six-year-old friendly, and less GAAAAAAH TOO MANY LEGO.

So I got him one of those 60-inch play mat things that lies flat, and then pulls up in to a magical storage bag. I know your boys have one, as well. After many months of use, what’s your take on it? Are they able to find all the tiny pieces they want? Are they ok with building on the floor? Does it contain the chaos?

Finally, what do you do with all the amazing “creations”? Store them forever? Put a limit on how long they stay a creation? I’m not planning on taking apart his LEGO police station or anything, but he doesn’t PLAY with the stuff after he builds it. Building is the fun for him, and then it just sits around and does nothing.

Got any great LEGO advice?

Thanks!
Lost in LEGO Land

Fair warning: Today’s advice column is probably more of a “let’s get together and have a Cry Circle over the losing LEGO battle” than actual advice.

My house is wall to wall LEGO, and while we do have some excellent storage options, once you add kids and their creations to the mix, they are far from perfect. And I guess maybe that’s the best we can hope for. I’m regularly on Ikea Hacker and see all kinds of Amazing! Projects! For Containing! And Organizing!  All The LEGO! but I know my kids. They’d still find a way to let the LEGO spread throughout the house and across every intended homework surface.

Here’s what we have, and do:

We’ve had ours for years and yes, I still highly recommend it. Our LEGO collection has, unfortunately, outgrown even the largest size and I’m loath to bring ANOTHER one into the house. But I probably will at some point. (I actually want to buy one of the small ones for travel, since OF COURSE we end up taking a ton of LEGO to the beach house or when we visit family. Keeping the play around the mat MIGHT save us the inevitable frantic search for some super-important missing piece on our last day of vacation.)  My boys have never minded sitting on the floor and digging around for pieces — I think the wide, flat surface actually makes it easier for them to find what they’re looking for than digging around in a deep bin or box (which they usually end up just dumping out all over the floor anyway). Plus it’s great for collaborative building, since multiple kids can sit around it and not be in each other’s way. I’ve sat around it and built “stuff” with my kids and find it to be a great combination of ease of play plus ease of cleanup.

So while the play mats make it easier for kids to spread out and dig through the collection, we HAVE moved to bins for containing and organizing my oldest son’s precious “specials.” The deep Trofast bins are where we (attempt) to keep the different LEGO lines and brands together. (One bin is Chima, another one is Ninjago, etc.) These bins are big enough that the small-to-medium-sized sets can go in assembled, with maybe only minor repairs needed. (My son does like playing with his sets and minifigures, so more on your son’s play style in a bit.)

We have them. We just HAVE to have them. I am not Will Ferrell in the LEGO Movie and I’m sorry, but my kids would save and treasure every single thing they build FOREVER, even if it’s basically five pieces stacked haphazardly together. So here’s what we do:

a) For my younger children (ages 4 & 6), they are allowed to put whatever they’ve just built in a single cabinet in our living room, right next to where we keep the LEGO bag. This is mostly to make clean-up time more bearable, because I’m not making them destroy whatever little thing they’ve just worked on. Because honestly, once the creations go into the brown cabinet, they RARELY come back out again. I try to pay attention if something really does seem special and gets pulled out to be worked on or played with again, but if not, I go in there about once a month or so and quietly clear stuff out when they’re not around. I KNOW. I’M AWFUL. It’s mostly the very small stuff, loose pieces, or stuff that’s already obviously falling apart. (I used to toss minifigures into a separate bin but my kids staunchly refused to follow my lead on that whenever they cleaned up, so whatever. Minifigures now go in the LEGO bag as well, unless they’re in my oldest’s room, and sorted into Trofast.)

b) My oldest child is 9, and has a very different building style than his brothers. He’s very serious about his sets and collections and does play with them, at least until he tires of the TV show/tie-in whatever and moves on to a new line. But just like your son, his room was OUT OF CONTROL. The number of assembled sets was insane, and every single surface (and the floor) was packed with them. Getting the Trofast helped, but mostly I just had to lay down some rules and limits about how many sets could be out and fully assembled. I absolutely ENRAGED him once by going into his room and cleaning it all for him in one brutal sweep, so the last time it got out of control we sat down together. I explained to him that no, sorry, he can’t have LEGO all over his floor all the time and from now on I expect him to keep his desk organized as well. There absolutely HAD to be enough free space for him to do homework or draw or do ANYTHING BESIDES JUST LEGO.

You know? He got it. We went through everything together and talked about it. Turns out he’s pretty over Ninjago, so we demoted that stuff back to the LEGO bag and thus freed up a bin for Ninja Turtles. (Because OMG, it’s all so DIFFERENT and UNIQUE, right?) I told him he could keep one “thing” on his desk at a time, so it needed to be the thing he was actively building or playing with. He chose Minecraft for the desk, and we cleared and sorted everything else. Eventually we cleared enough space that I gave him the okay to keep a couple other elaborate sets assembled and on top of the Trofast, and one additional set on the desk. (He also has a bin that’s just miscellaneous loose pieces that migrate up from the LEGO bag. He is indeed patient enough to stop building in his room and go downstairs in search of what he needs. This comic from The Oatmeal is pretty on-point.) I imagine we’ll have to do this again at some point, but he’s been REALLY good about keeping things organized every since.

I also hope to install some display shelves in his room for some of his bigger sets going forward, because yeah. We had the freaking Hogwarts castle and it was amazing, but without a real “spot” for it, it eventually crumbled beyond repair and will likely never be built again. My mother-in-law was amazing at keeping sets and instructions together in plastic storage bins (she STILL HAS THEM), but I fear that level of organization is beyond us at this point.  I end up tossing most of the instructions after “enough” time has passed and I know the pieces are just scattered to the ends of the earth, so rebuilding would be insanely frustrating. This is a shame, because you can make bank selling old sets and instructions even without the original box. (We’re planning to move, so I packed up my own Simpsons house set in a bin with the instructions, at least. I’ll probably do the same for whatever assembled sets my son has on his desk, IF I can find the instructions.) Basically, if you can demolish as assembled set with all the pieces and keep the instructions together in a bin, that’s awesome. Do it. But don’t feel awful if you can’t. It’s just part of life with LEGO.

Netbricks is a rental service for LEGO sets. It’s pretty genius. Note that I am not a member, have never been a member, and am not getting any money or free LEGO to suggest them. But I bet your son would LOVE it, since he’s about the building and not necessarily about playing with the set forever and ever after (like mine, sigh). He’ll get the sets he wants to build in the mail and then YOU get to send them BACK, where they will NOT BE IN YOUR HOUSE, for you to curse and step on and generally feel overwhelmed by.

If there is a question you would like answered on the Advice Smackdown, please submit it to [email protected]l.com.