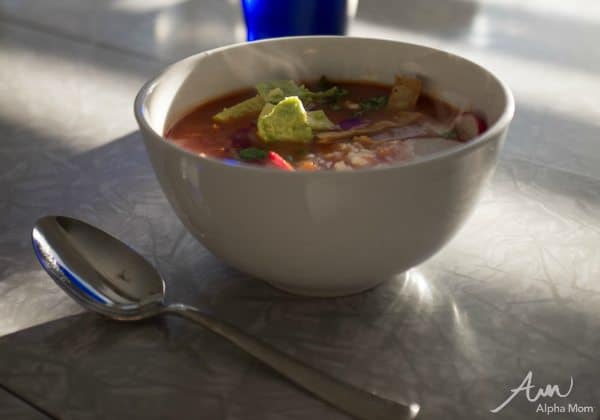 Blue Apron and Getting Your Teens Cooking Dinner

This post is sponsored by Blue Apron. As always, all opinions are my own.

Once upon a time, a long, long time ago, I got the brilliant idea that my kids would take turns cooking for the family one night a week. It was a brilliant plan, and it worked… until life got busy and we stopped. Between school, activities, lack of planning ahead, and just life, eventually we were back to the status quo—I do 99% of the cooking, because 1) I work from home and so can do prep or crock pot stuff during the day and 2) I’m that perfect blend of lazy (the kids always need “help”) and nutrition-conscious topped with a dollop of control freak, which means doing the cooking myself is, in many ways, just simpler.

But the reality is that I hope someday (maybe even someday soonish…) my teens will leave me and be able to feed themselves more than just ramen. So when the opportunity to try out Blue Apron came up, sure, some people would’ve said yes for the chef-designed recipes and the ease of having a refrigerated box of fresh ingredients in precise portions delivered to their doorstep, but not me. I said yes because I knew it meant a meal my teens could prepare with zero assistance from me, and it would be balanced, nutritious, and would not result in a crime scene of wasted food in my kitchen. Sign me up! (Also—read on, because we have a special offer for Alpha Mom readers if you want to sign up, too!)

[Okay, I lied a little. I did help them tie their aprons.]

Blue Apron offers a wide variety of recipes (and they’re adding to their menu all the time), but their accommodations for special diets are still somewhat limited; because my daughter is a vegetarian and I can’t have gluten, I was worried it might be difficult to provide us with appropriate meals. (I did offer that I can always leave anything gluten-containing off my plate, provided it’s not a gluten-centric dish like pasta or something, and that a fish recipe with hearty sides would work for my daughter to just skip the entree.) To my delight, our test box arrived with directions and ingredients for a vegetable tortilla soup (and the tortillas were corn, so it was a full-on vegetarian, gluten-free meal that worked for all of us!) and a panko-crusted salmon with fingerling potatoes and a crunchy Waldorf-esque salad. The kids opted to prepare the soup so that they could test it out on a meal that needed no adjustments. (I later made the salmon and just didn’t put panko on my piece, but more on that later.) 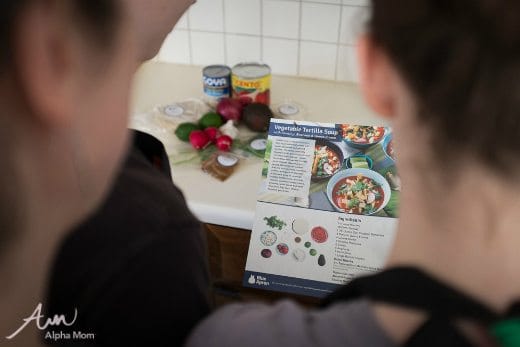 The kids pulled out the soup ingredients and the recipe card and fell to dividing up the prep and chopping ingredients. While the soup itself was simple—a can of chopped tomatoes and water added to onions, garlic, and the included spices, plus a can of hominy making it more hearty—the stars of this creation are really the bevy of garnishes. My daughter sliced up and toasted tortilla strips while my son chopped cilantro, broke up the queso fresco, sliced radishes (“Mmmm, I didn’t know I liked radishes! Crunchy!”), and quartered limes and scooped out an avocado. There may have been a small scuffle over who got to use the garlic press. Jokes were made about how there’s “no crying in soup” during the dicing of the onion. 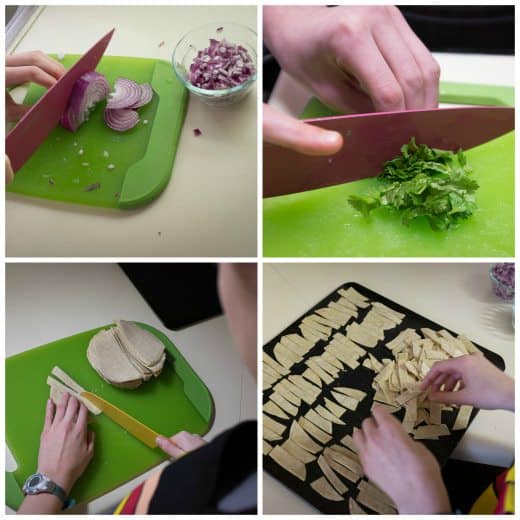 “That took forever,” my daughter huffed, once a quick consultation of the directions confirmed they were finally ready to get the soup going. (Forever, by the way, was approximately 10 minutes.)

“Welcome to what I do for you guys pretty much every single day,” I said. “It’s called cooking!” They love it when I’m supportive like that.

Together they managed to get the aromatics fragrant in the pot, then added the tomatoes and water and hominy. Now all that was left to do was some simmering and stirring, so of course my oldest shooed away her brother and told him to go set the table. He obliged, eventually. There may have been some shenanigans along the way. 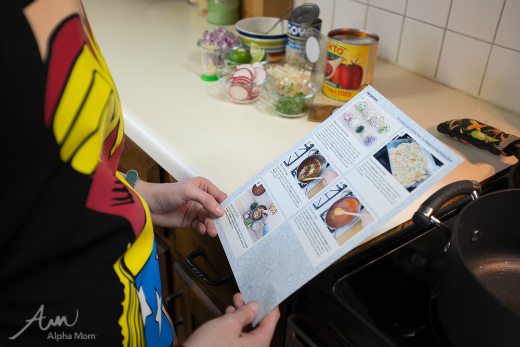 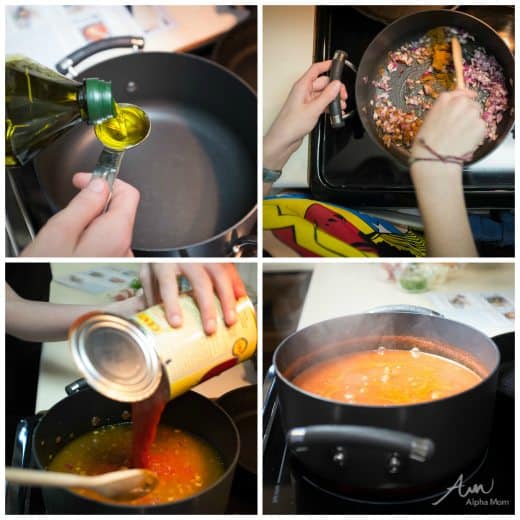 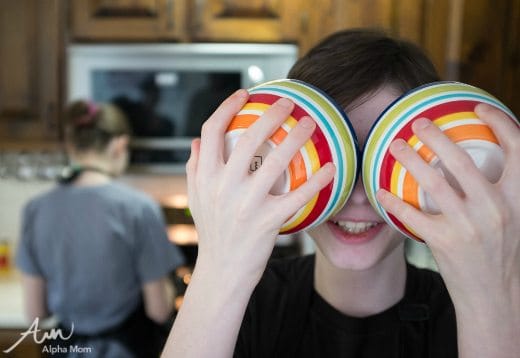 Once the soup was ready, we filled bowls and everyone garnished them the way they liked. My daughter and I hogged the avocado (because the guys don’t care for it), and she skipped the radishes while her brother took a big pile of them. The toasted tortilla strips and crumbled queso were enjoyed by all. 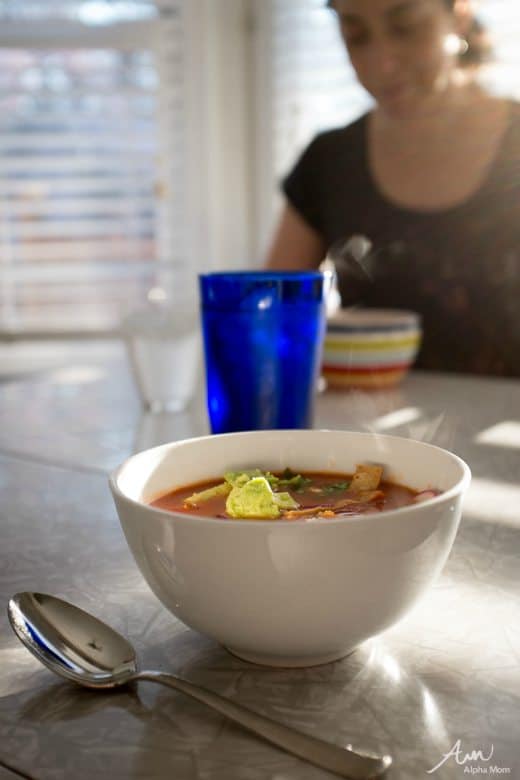 I’m not going to lie, here—during the cooking, with little dishes and cans spread out on the counter, I was skeptical that this was going to be enough food to feed “four adults or two adults and up to four children,” as the Family Plan purports to do. It just didn’t look like that much food, or even like the 500-700 calories/serving the Blue Apron meals are all supposed to be. But as I peeked at the kids prepping all of the soup garnishes, I realized I was probably just confused by all of the exact proportions, because if I was cooking from my own grocery shopping, I’d have extra of everything. The only thing that arrived in the box which was more than called for was the garlic; we were sent an entire head when the recipe called for 3 cloves. (Fine by me; we’ll always use garlic.) Everything else got used, and in the end we ate four pretty large bowls of soup and had a serving left over, even. Everyone was full and satisfied. And I didn’t have to cook!

A few days later, I made the salmon meal. I was not only impressed by the pieces of salmon themselves (let’s face it, that’d be an easy place to cut corners a little, but it was really beautiful fish, vacuum-packed), my children ate a salad dressed with a homemade Greek yogurt-lemon dressing and didn’t complain. Magic. Again, portion sizes were more than sufficient, so my daughter was able to make a complete meal of the salad and roasted potatoes.

Thanks to the generous folks at Blue Apron, the first 50 Alpha Mom readers who sign up through this link will get two meals free on their first order after sign-up! I cannot guarantee you’ll be able to sucker your kids into making dinner for you, but it’s worth a shot.