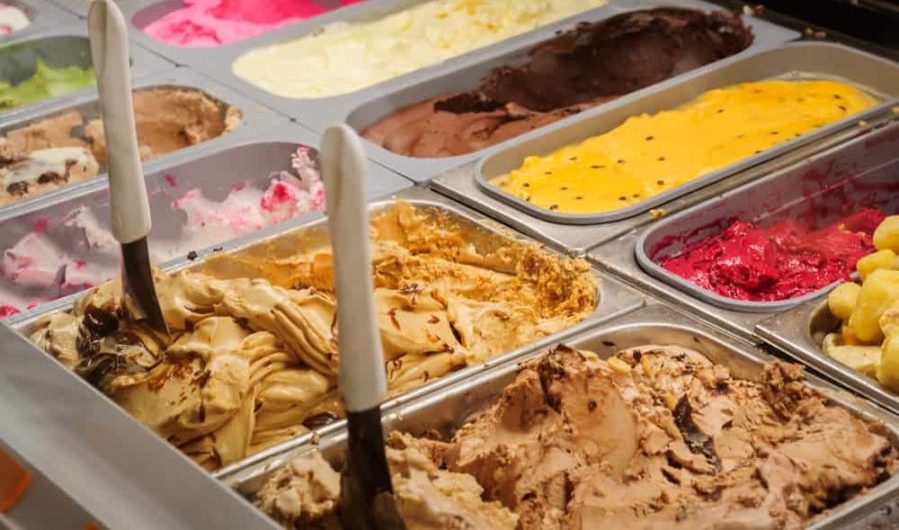 Have you ever tasted a lemon icebox pie? It’s soft, with a touch of tang at the finish, like a lingering kiss. There is a restaurant in the Austin area that serves this delicious confection; Angel’s Icehouse is a down-home family restaurant where you might post up on a Friday night with a frosty beverage and listen to live music. Lemon icebox pie is a rare dessert in these parts, though, in the land of pecan pie and churros.

This summer, on me and my son’s annual quest to find the best ice creams in the Midwest, I offhandedly took a small spoonful of my niece’s lemon ice cream at a tiny new shop in Elkhart, Indiana. When the icebox pie flavor hit my taste buds, my eyes widened and I nearly snatched away the rest of her cup. This ice cream won first place in my heart, and I’m already missing it back in Texas. (Help! Send ice cream!)

After four states, several cities, and at least 10 stops for ice cream along the way, I’m finished with all of the heavy lifting (you’re welcome). I can confidently name the best ice cream flavors in the quad-state area of Illinois, Indiana, Ohio, and Michigan.

Now, if you’ll excuse me… I need to head to the gym now to work off all of those hard-earned ice cream calories.

Best Ice Creams Shops we found in the Midwest 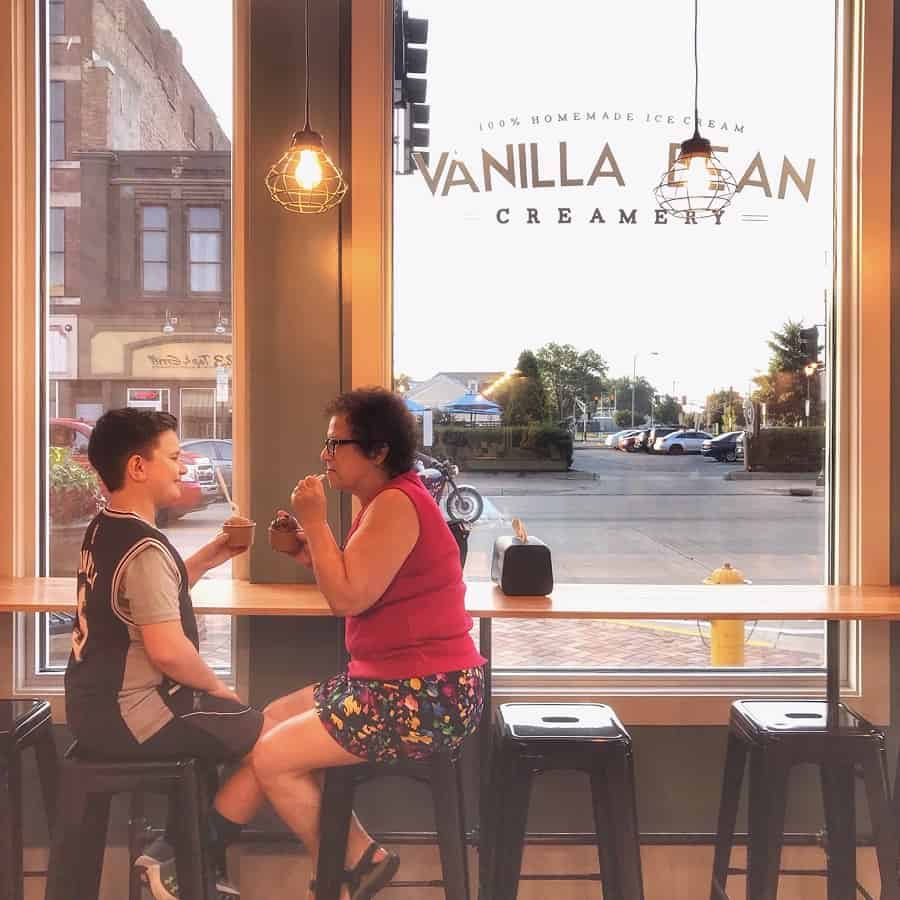 Clara Miller was born into an Amish community in Missouri. When her parents divorced, young Clara was whisked off to South America to live with relatives in a move that surely resulted in culture shock. Later on, Clara found herself back in Shipshewana and started her family, and then a bakery called Sugar & Spice. Up at dawn every day, she learned how to mix and meld flavors and come up with new ideas, and her bakery thrived for eight years.

She wanted to try something else, though, and Clara and her grown daughter Krista started to dream about an ice cream shop. Their vision was specific: hardwood floor, brick walls, and outdoor seating, Clara told me. They came across a building in Elkhart, a few towns away from Shipshewana, that fulfilled all of their wishes and they opened Vanilla Bean Creamery. 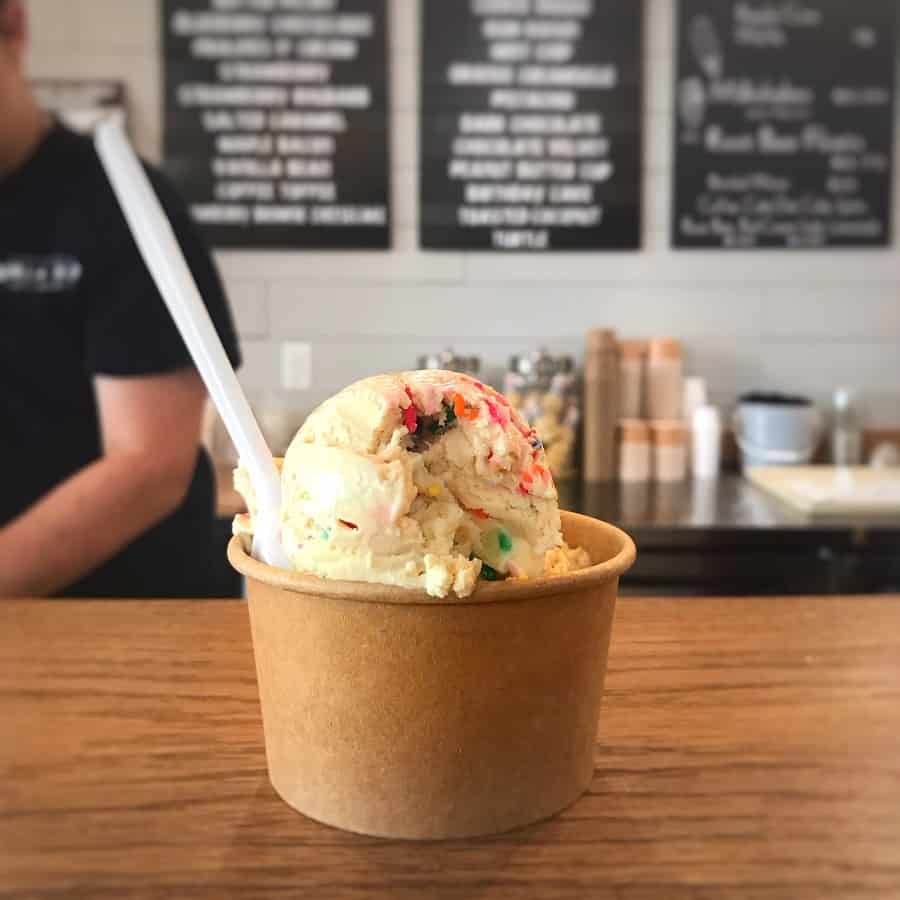 Flavors to try:
The mother-daughter team, along with their staff, makes all of their ice cream flavors inhouse. The black cherry, in particular, was a fun challenge for Clara because she didn’t use a recipe. She experimented with different combinations until she hit on the right one. And it is, indeed, a wonderful balance of sweet and tart, not cloyingly sweet.

But it’s the lemon, in my opinion, that’s the true star. Upon my first bite, I was reminded of my lemon-and-raspberry wedding cake with luscious buttercream; I didn’t want to stop eating it. The second time I tried it, I asked them to add rainbow sprinkles and it added a lovely crunch and texture.

Elkhart is my hometown, and I was surprised to find this new gem downtown, just a few months old. The atmosphere is cozy and sparkling clean, the ice cream made with love, and the staff kind and friendly. I hope it stays for a long, long time. 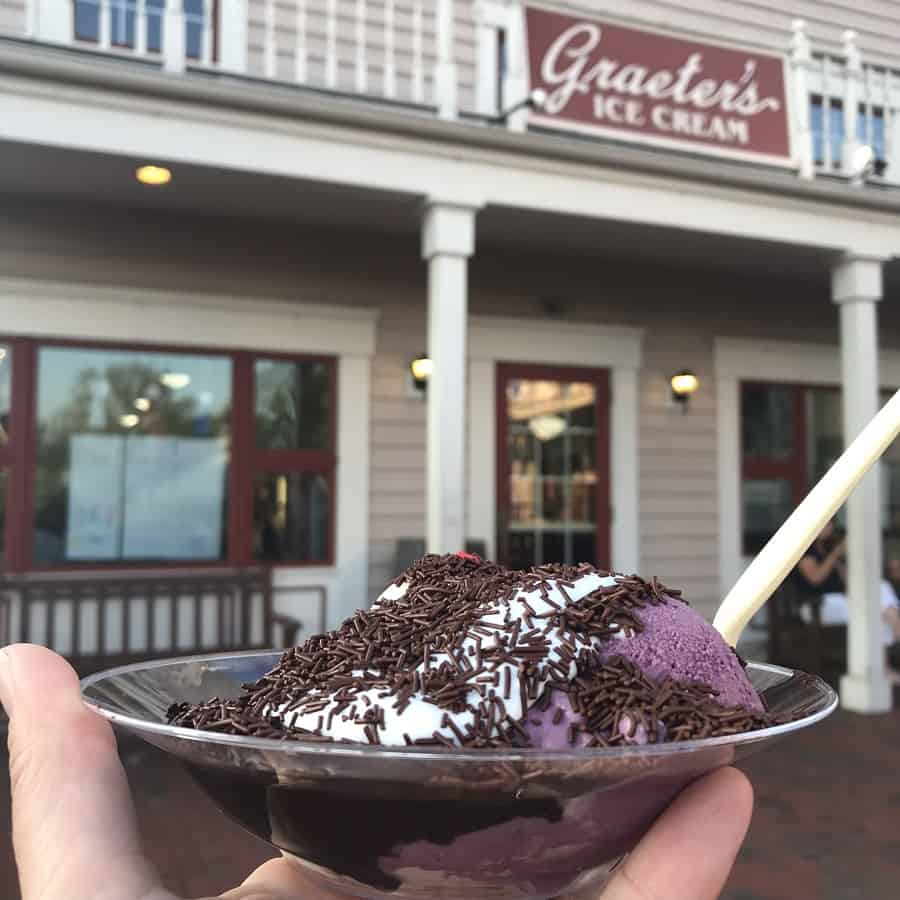 2. Graeter’s in Centerville, Ohio (but many locations in the midwest)

I went to college at the University of Cincinnati, and Graeter’s has been a favorite for me for the last 30 years. My niece loves the Buckeye (peanut butter) flavor, but I’m partial to a scoop of vanilla and a scoop of black raspberry chip with a dollop of homemade marshmallow creme, a drizzle of bittersweet chocolate sauce, and a generous spoonful of chocolate jimmies. Their jimmies are the best I’ve ever had, too – they add texture and flavor but without the thick, gets-stuck-in-your-teeth problem of the fatter sprinkles other places serve. 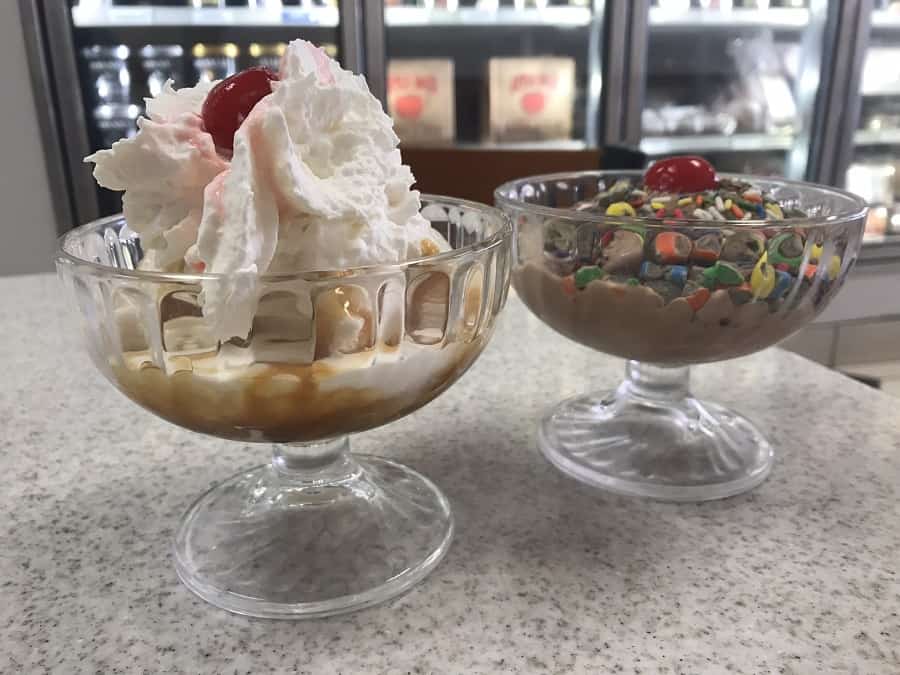 My first choice at Oberweis was a scoop of birthday cake ice cream, and it was fantastic. However, I also tried the lemon blackberry at the behest of a local friend, and it exploded with fruit and cream flavors. It’s seasonal, so you can’t always get it, but if you can, do not miss the chance. 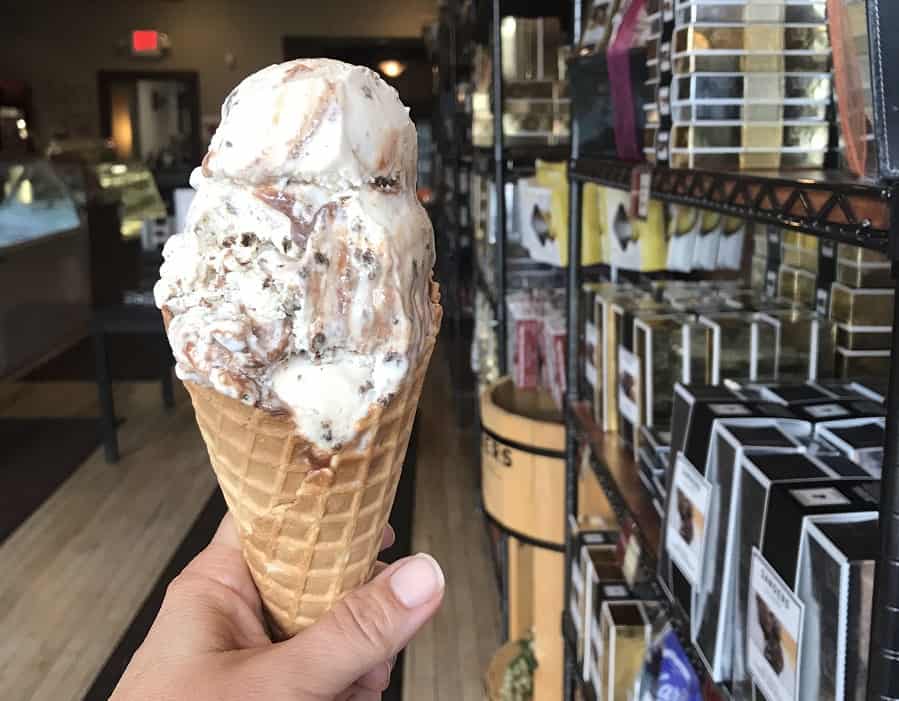 Bumpy Cake is a unique dessert created by Fred Sanders in Detroit – the original is a chocolate cake with ridges of buttercream enrobed by a thin layer of chocolate icing. The “bumps” was what the company calls a “happy accident” when Fred was running low on buttercream and hit on this idea. The Bumpy Cake ice cream combines this delicious cake with vanilla ice cream, forming a delicious treat that might remind you of an Oreo, if an Oreo was injected with ice cream and frosting and can be found at Sanders Fine Chocolates & Ice Cream Shoppe. 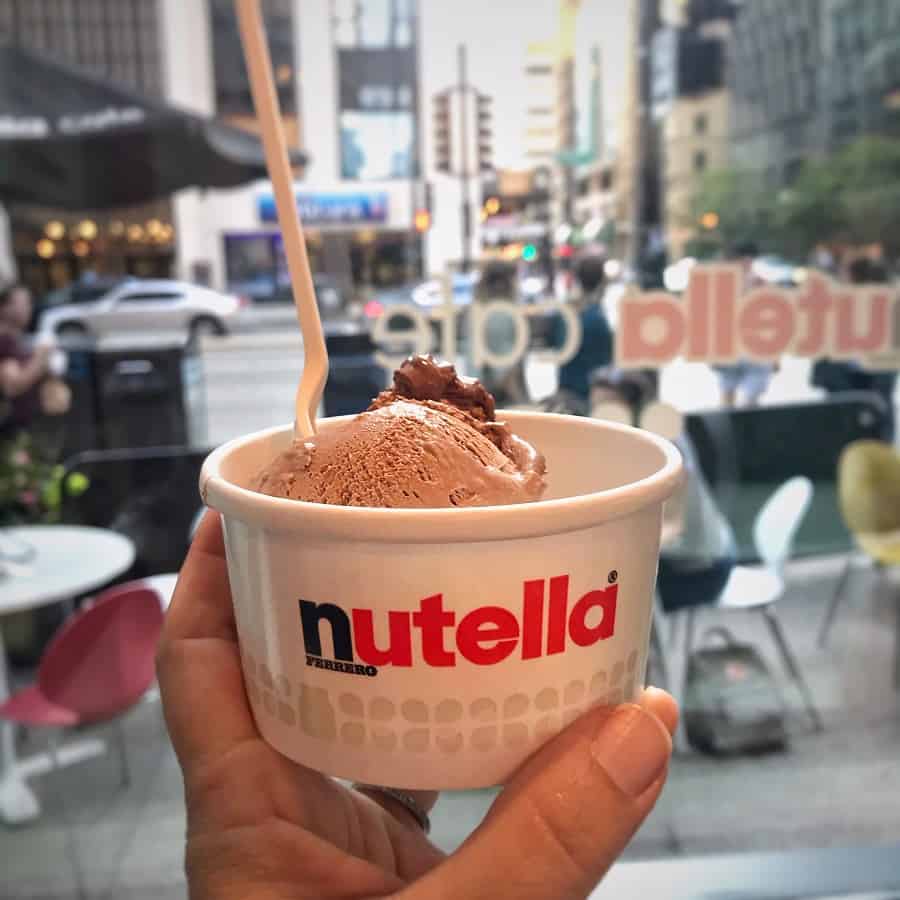 This one is for my 9-year-old son; on our summer visit to Chicago, he got very excited to see the Nutella Cafe sign, so we had to investigate. He ordered the Nutella gelato and licked the entire cup clean with a happy smile. I’m allergic to nuts, so that was one I didn’t get to try. However, his enthusiastic endorsement earns the Nutella Cafe a spot. (For now, the only other Nutella Cafe is in NYC.)

Hey, summer is not over yet! It’s not too late for ice cream, so get out there and try a few of your own. Let us know what you find along the way.