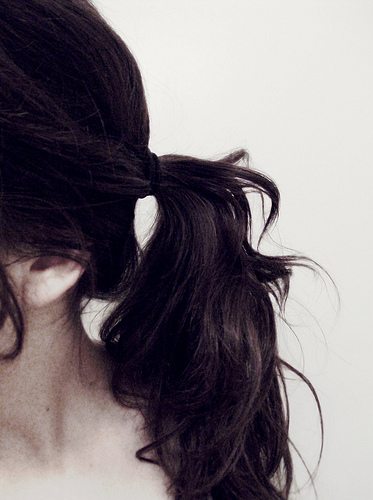 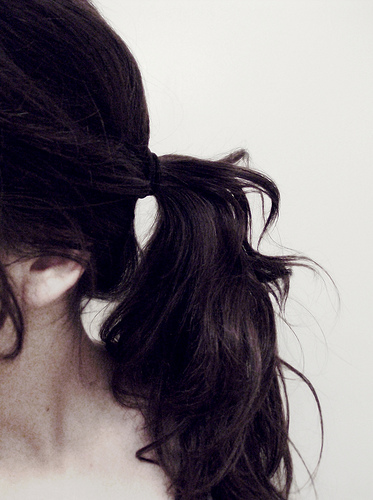 It’s a particularly cruel twist of fate: After you have a baby, you have less time than ever to fuss over yourself. Your beauty routine gets downsized to ponytails and chapstick, on a good day. So OBVIOUSLY, this would be a FANTASTIC time for your hair and skin to go absolutely off the rails.

I’ve written about it already, over at Ye Olde Advice Smackdown. Here, I shall excerpt a bit:

Most women actually lose, on average, about 100 hairs a day, usually when showering or brushing it out. This is hair that is no longer actively growing, and the non-growing hairs make up about 5 to 15 percent of what’s on your head. So it’s not really a big deal when you see them end up on your hairbrush in the morning.

During pregnancy, your wackaloon hormones keep your hair growing and growing. And growing. That 5 to 15 percent number plummets. So you shed less hair. Sometimes (and this was probably true for you) you shed a lot less, so your hair gets thicker and lovelier and pregnancy-glowier.

But then you pay for this postpartum. Usually around three to four months after you give birth, your hormones go wackaloon in the other direction, and your plummeting estrogen levels slow your hair growth once more. And alllll the hair you didn’t shed during pregnancy starts coming out in clumps. It’s…not fun, and it has happened to me both times, and I’m currently in the thick (thin?) of it right now.

Despite writing about the topic for an ADVICE column, I do not really have that much ADVICE about dealing with the hair loss. I do have a lot of sympathy for anyone currently experiencing it, but I found that it was one of those “only way through it is through it” sort of things. You will shed a lot of hair for awhile, and then you won’t anymore. You can certainly try different shampoos and products, but honestly, by the time you’re likely to have worked out the right combination, the problem will stop and your hair may require a completely different line-up of products.

Falling Out is Just the Beginning

I had the double whammy of my scalp deciding to go haywire around the exact same time. I’ve always had an oily scalp (except during pregnancy, when it became downright normal), but starting around two or three months postpartum my scalp became RIDICULOUSLY oily. My hair would not come clean, product build-up galore, greased up like a 90s grunge rocker, etc. This was another thing that sort of vanished after awhile, though only after I temporarily switched to some cheap drugstore shampoo — basically the harshest, unpronounceable, chemical-laden stuff I could find, which at least solved the build-up problem that my fancy salon shampoo did nothing for.

So if shedding is your only hair complaint, go ahead and consider yourself lucky, as other women develop all kinds of other weirdness, from dandruff to cowlicks to grays.

And then! AND THEN! I actually completely forgot about the other stage of postpartum hair bonkerness until a couple people suggested it as a topic on Twitter this week — you get these..things? Little weird clumps of wispy flyaway hair along your hairline? Forehead, temples, around your ears, nape of your neck? And they stick out and curl funny and won’t. Lie. Flat. What. The. Hell.

For me, they strike right as the shedding stops: a combination of broken, poorly nourished hair alongside regrowth of new (yet pre-pregnancy fine) hair that manage to ruin the look of even the most basic ponytail. They are really, really annoying.

How to Style Your Hair Without Losing Your Mind

A few ideas for dealing with the flyaways and the falling out and the other hair weirdness that comes with having a baby:

1. DON’T WRAP YOUR HAIR IN A TOWEL. Another broken record from the Advice Smackdown files, but FOR REAL. Wrapping wet hair in a towel is TERRIBLE for your hairline. If your hair is weakened for any reason — hormones, nutrition getting rerouted to breastmilk, stress, etc. — the towel will cause a LOT more breaking. (Those little shammy turbans aren’t much better. While they don’t have the weight of a towel, you generally wrap them tighter so there’s still a lot of pulling.) The best thing for fragile hair? Gently comb it out ASAP after the shower, while it’s sopping wet. Use a detangler if you have to, and then clip a towel around your shoulders until you can blow dry or it air dries enough to stop dripping. (I found squeezing the ends with a cotton t-shirt absorbs the excess a little faster.)

3. Keep your ends trimmed. Hair damage start at the ends, typically, so regularly cutting off the split ends keeps the rest of the shaft healthy. Ask for a deep conditioning treatment if you notice a lot of breakage or the wispy flyaways. And talk to your stylist about a good at-home conditioner. Getting to the salon might not seem like a very high priority in between all the well-baby visits and such, but trying to go too long between trims makes the problem worse.

4. Tame your hair with products…carefully. The crazy flyaways are often on the fine side, even if the rest of your hair is not. So using products that promise a lot of hold can end up looking oily and heavy. Not really a good look for around your face. Personally, I had the most luck with spraying light hold or shine products (regular ol’ hair spray or BedHead Head Rush) into my palms and then smoothing the cowlicky-curl-things down really quickly. No creams or serums or pomades or anything that could give my scalp the chance to play oil slick once again.

5. And remember, this too shall pass. Probably. While my hair will likely never achieve the natural-born wonderfulness it had during my pregnancy (or when I was on Clomid. I may have gone completely crazy on that stuff but damn, my hair looked AMAZING.), it is definitely what I would now call back to normal. Maybe a little bit more of a natural wave than I had before, but still nice and predictably MY HAIR once again. Normal shedding, normal hairline, normal ratio of good-to-bad hair days.