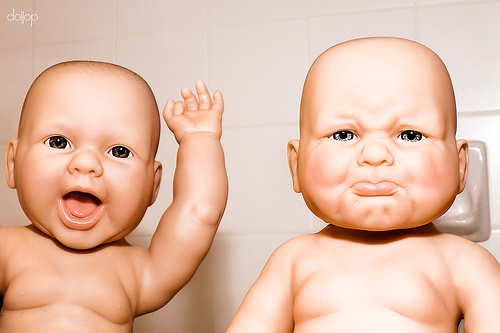 When Noah was five or six weeks old, my husband opened his mouth and spoke the most insane sentence in the history of the human race: I think we should have another baby.

WHAT. WHAT? Are you kidding me? We just HAD a baby. Do you remember that? Are you so sleep-deprived that you’re having time-traveling hallucinations? You know, AGAIN?

No, I didn’t say any of that. Instead, I said something equally as insane: Yeah, I think so too.

Of course, this didn’t translate into actually trying for another baby right away, but still. I was shocked that we felt so sure, so quickly. We’d always planned on having one baby, singular. I spent the majority of my pregnancy insisting that this was a one-time deal, that I was not going through this again. And then BOOM, he arrived and our world turned inside out and upside down and we were like little kids staggering away from the end of a wild roller coaster, barely waiting for the dizziness to die down before screaming AGAIN! AGAIN! and running to get back in line.

How Do You Know You Want Another Baby?

This time, we’re admittedly a bit more conflicted. Three kids? THREE? That sounds exhausting. And expensive. Most days, I think I would be more than fine with keeping our family as-is, and there are many smart, practical reasons that would make that a smart, practical decision.

Some days, though. I’m not sure I’m ready to say never again. The best I can say right is: Not yet.

What about you? Did you have a preordained family size all mapped out? Did you ultimately stick with that family size? Or did you have to adjust your plans (say for, infertility or multiples or something else outside of your control)? Are you done? Not done? Not even ready to start thinking about the question, crazy columnist lady, oh my God?