Twitter Facebook Pin It Email Article
Prev The Non-Joys of Breastfeeding, Part One: THRUSH Next From One Baby to Two
Baby 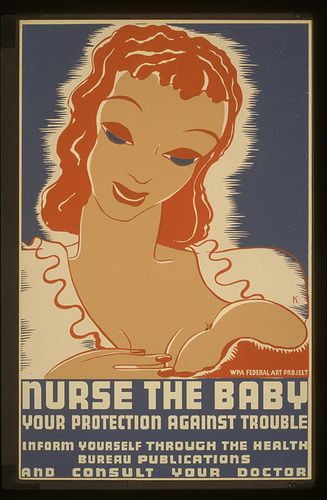 REASON NUMBER 273,903 WHY I HAVE THE BEST JOB IN THE WORLD: When my boss, Isabel, chief of Alpha Mom, suggested I write about mastitis, I said sure! But only if you answer some questions about your boobs first. And not only was this a perfectly natural conversation for us to have, she went ahead and wrote half of my column for me. The column that she pays me to write.

LESSON LEARNED: When you feel like slacking off at work, just compliment your boss’s rack.

So first! Mastitis, from Isabel, Someone Who’s Been There:

I asked Amy to write about mastitis because my first bout of it was so fast and furious and I had no idea it was happening to me. Not everything presents itself in a textbook manner and my case of mastitis did not have any breast symptoms. I thought I had a very BAD case of the flu, which made sense as I was sleep-deprived and rundown those first few weeks postpartum. However, my so-called flu was not responding to repeated dosages of Tylenol and I felt crummier with each passing hour.

A full 24 hours later, when office hours opened (my fever was now at 104.5 degrees for quite awhile) , I called my OB-GYN who berated me for not contacting him sooner (gee, thanks, that’s what I really needed). He prescribed antibiotics and soon I was better.

What I learned from my experience is:
1) though you can’t prevent mastitis you can mitigate its chances of occurring by ensuring you don’t go through prolonged periods of engorgement,
2) the minute you feel achy and feverish, contact your OB-GYN or pediatrician (who also yelled at me)
3) you can continue to breastfeed (I pumped/ breastfed for 10 months or until I had three months worth of breastmilk in the freezer. I was a milk machine.), and
4) just as you would contact your pediatrician in the middle of the night if your baby were ill, you need to realize that you, too, should be on high alert about your own well-being (i.e., know where there is a 24-hour pharmacy).

Yes, I went on to have two more bouts of mastitis but they were not debilitating like my first. I nipped them in the bud immediately.
***
Now, although I’ve never had mastitis (I still have a set of combo warm/cold compresses that I bought before I gave birth, though, JUST IN CASE), I do really want to pound home point number three. When my mom had her first baby, my brother, back in the 1960s, breastfeeding just wasn’t done. And it certainly wasn’t supported. When she came down with mastitis she was told, essentially: Well, that was fun! Time for bottles!

You would think, in the 40-odd years since then, what with the whole renaissance of breastfeeding support and acceptance, that women would get slightly better advice these days. And yet I know three (THREEEEE) women who have all told me that they breastfed until they got mastitis, and thus “had to quit.” Doctor’s orders.

(One of these women is actually my cleaning lady, and she tells me this story every time she sees me nursing Ezra, because she really didn’t WANT to quit, but was simply TOLD she had to quit, and she’s STILL sad about it to this day.)

If you get mastitis, you may need antibiotics. (And then you may need to reread last week’s column about thrush.) You need rest and liquids and Tylenol and warm and cold compresses and looser clothing. You do not need to quit nursing. You can pump, if that’s less painful, but keeping the boobs as empty as possible is key. Nurse more, not less. Engorgement is the enemy.

Weaning in the thick of mastitis is actually like, a REALLY bad idea, since it increases your chances of developing a breast abscess. (That sort of thing has to be surgically drained, by the way. Oh, God.) It seems like some doctors tend to paint a bleak picture about repeated infections and a future of one clogged duct after another instead of encouraging MORE feeding/pumping sessions, thus making a sick and miserable new mother feel like quitting is the only tolerable option.

I can’t really say anything more than what Isabel said: Like thrush, you might not get *all* the textbook symptoms. You might have breast pain — terrible breast pain, from what I’ve heard — or you might just have the fever. You might have a specific area of breast pain — it might be red or hot or raised — or you might not. But if you do need antibiotics, you’ll definitely WON’T magically feel better in the morning, or after a nap. You’ll feel progressively crappier hour by hour, most likely.

This is different than a plugged/blocked duct, by the way. Another thing I’ve been lucky enough to avoid. A plugged duct is sort of like mastitis without the infection part — it’ll gradually start feeling better on its own, with frequent nursing and warm and cold compresses. If you aren’t sure what you have, monitor your temperature. If it rises above 101 degrees Fahrenheit (38 degrees Celsius), call your doctor immediately. Hell, go ahead and call before that, particularly if it’s getting near closing time and you’ll need to wait until morning otherwise. Remember how I yelled at you, back when you were pregnant, about not being afraid to call your doctor WHENEVER you thought something might be wrong? About not worrying about looking foolish or silly or taking up the nice Labor & Delivery nurses’ time?
Same thing. So you’re not pregnant anymore, but last time I checked, you’re still a very important person undertaking a very important life-sustaining task.