Bliss Sleeping Peel Liver Spot Lifter: Does It Really Do That…Or Anything?

Sometime around the New Year I posted my skincare and cosmetics wish list for 2008 — and pretty high up on that list was “a skin lightener that WORKS.” I have a single medium-ish sun spot on my right cheek. A memento from pregnancy. Foundation and bronzers make it less noticeable, but man. I’d really love to get rid of it entirely, or at least lighten it a bit.

(The only product I’ve ever tried for it was Philosophy’s Pigment of Your Imagination SPF, which I hated.)

Since I know my dermatologist will tell me to wear sunscreen (done) and suck up and live with it (nooooooo!), I hit the cosmetics aisle. Skin lighteners are expensive, and all the hyperbole on the packaging (instant, dramatic results! blast away pigment with the power of aminodroxydoneine and the essence of green tea!) has always made me roll my eyes. They can’t really work all that well, right? (See: Philosophy; Imagination, Pigment of.) 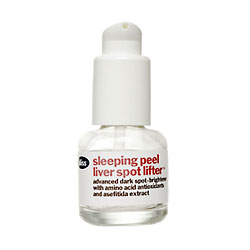 But what the hell, I picked up a bottle of Bliss Sleeping Peel Liver Spot Lifter. Sephora had pulled several lightening serums and creams into a special display for liver/age/sun spot removal, and I picked the Bliss one because it wasn’t the absolute cheapest, but was still priced well below the most expensive options. A nice middle-of-the-road option. For $52. Yikes. That’s one uppity road, yes.

So I’ve been using it for a month now. Over a month, probably. So what did the “most advanced formula possible” do for in all that time?

There are actually days where I think the dark spot looks WORSE, like the serum did lighten the non-pigmented, already-very-pale skin around the spot, while doing nothing for the actual target area. Some days I think I may be imagining even this.

Either way, I may as well be the proud owner of a $52 bottle of air. Pfft.

Editor’s note: Bliss Sleeping Peel Liver Spot Lifter has been discontinued. We suggest Bliss That’s Incredi-‘peel’! Glycolic Resurfacing Pads instead — we have not tried them, but they are well reviewed elsewhere.