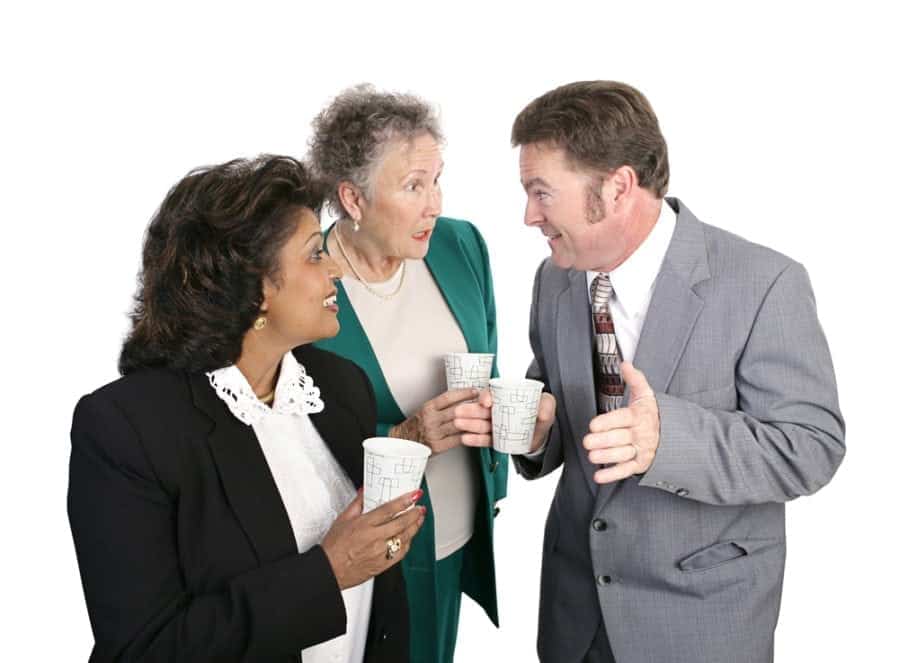 I’m in an awkward situation at work. I’m pregnant, and my co-workers think it is normal/acceptable to have extended discussions about other people’s parenting – particularly people they saw at the park/mall/church that weekend. This has mostly come up in terms of breastfeeding. It started with one of my coworkers (male) commenting about how rude he found it when a mother near him started nursing her one year old. One of my other coworkers (female) responded, “That’s disgusting.”

Since then, they’ve all brought it up at work when they saw someone breastfeeding in public that weekend. These conversations (which I’m not participating in, but sometimes they’ll try to draw me in) sometimes go on for 15-20 minutes, and I find it extremely distasteful – why is so much time being devoted to commenting on what a stranger does with her breasts? During the most recent conversations, one of my coworkers said that she should have called Child Protective Services when she saw a mother breastfeeding her 18 month old. The most common themes are how rude it is for a woman to breastfeed without a cover (and how women who do so must be looking for attention) and how gross/disgusting it is to breastfeed an older baby/young toddler. Now I’m so shy/self-conscious that I plan to use a cover if I breastfeed, but that’s my choice, and I’ve also been around enough breastfeeding women to know that you usually can’t see all that much you’re really staring or the child is flailing about.

What on earth do I do?

I’m worried about telling them to back off because in the past when I’ve expressed my disagreement with things they’ve said on any topic, they’ll hound me with it and make snide/sarcastic remarks. Should I just deal because part of living in the world is encountering people I disagree with? Am I overreacting? I feel extremely awkward not saying anything when they devote so much time to criticizing people they’ve happened to run into, and also sometimes they’ll ask me questions like “have you seen women doing this?” or say, “I hope you don’t plan on doing this when your baby is born!”

I’m starting to think that parenting should be in the list with politics, religion, and sex of topics one shouldn’t discuss at work. Help!

Wow. Yeah, your co-workers are very rude and more than a little weird.

Personally, I would try shutting it down with a super blunt description of what they’re doing: “Hey guys, can we maybe NOT spend so much time discussing what strangers do with their breasts? This just doesn’t seem appropriate for work and it’s getting to be a bit much.”

Then the next time and every time: “Guys. Seriously. Why are we discussing this at work?”

(I’d also personally be super-tempted to ask “Why are you even looking at a stranger’s boobs that closely?” to any male co-worker who starts bitching about it, and tell that female co-worker “Considering the World Health Organization recommends breastfeeding until age two, I’m pretty sure CPS would tell you to mind your damn business.” But I don’t have to work with these people, and would personally relish out-snide/sarcastic commenting them on the topic going forward, as I proudly breastfed three cover-hating babies anywhere and everywhere. COME AT ME, BROS AND GALS.)

If they try to draw you in again or question your plans around breastfeeding, act mildly shocked and taken aback. Then say something like, “That’s a very personal question/decision/issue and I’d really rather not discuss it at work.”

And if they continue to purposely hound you on the topic or bother you with snide/sarcastic comments, it’s probably time to escalate the problem to your boss or HR. Breastfeeding mothers have very clear legal rights and protections in the workplace, and these sorts of comments (about it being “disgusting” or even abusive in some way) could potentially run afoul of those. (Check your state’s specific laws and your company’s handbook before the conversation.)

At the very least I doubt this is the kind of workplace atmosphere — one that’s openly judgmental and hostile to new or nursing mothers — that your company would like to foster. Someone higher up needs to be aware that this is a regular topic of conversation (which is totally inappropriate to begin with) and that it’s making you, a pregnant woman who would very much like to return to a supportive, understanding workplace after giving birth, super uncomfortable. Then that someone needs to shut this shit down, because seriously.

And finally, I would guard against letting your co-workers discuss ANYTHING pregnancy or parenting with you from now on, lest you accidentally stumble into their next weird obsession. (Dear God, I do not want to hear these halfwits’ opinions on childbirth, and neither do you.) Just politely deflect and tell them it’s just not something you feel like talking about at work, you’re kinda burned out on the topic and would rather stay focused on work. How do you think that big re-design project is going? Boundaries, ahoy!

HR lady here! Depending on your company size and overall approach to culture (and support and accountability norms), raising this may be a great option. It will give the right folks a heads up that conversations like this are happening, and hopefully encourage some helpful (and instructive) dialogue between managers and teams about what’s appropriate to talk about and share during casual interactions at work. Hopefully those dialogues also include polite but firm ways that people can set boundaries within those interactions (exactly what Amy said – “can we switch topics? How about that project/baseball game/literally ANYTHING”). I hope that… Read more »