Twitter Facebook Pin It Email Article
Prev Dogs Are Easier Than Teenagers (Sometimes) Next Dear Former Self, Welcome Back. 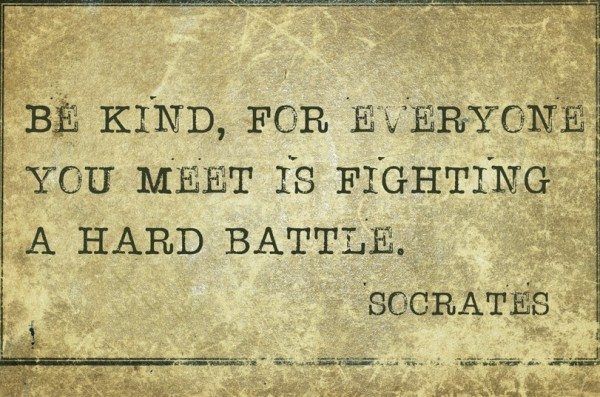 Recently a friend linked back to an old post of mine about the Hardship Olympics, and so I got to have the somewhat uncomfortable experience of witnessing a lot of commentary about what I’d said, years after I’d said it. On the one hand, I’m glad much of it still resonates with so many, and I also recall writing down my frustration at the time feeling cathartic. On the other hand, I cringed, a little, rereading it. I was angry. I was furious, really, and only partly due to the situation which had evoked the post. I was floundering in a scary time of wondering if my child would ever be okay, and I felt like I’d been kicked while I was down, when really I was just a giant, pulsing glob of fear and sadness and anything could’ve set me off in that state.

I stand by my assertion that there are far better ways to be supportive than the tired “it could be worse” approach, but with the benefit of time and hindsight I realize none of that mattered as much as learning how to take care of myself when life was hard. And lashing out in anger, as I did, was satisfying in the short term, but not who I want to be in the long run. A couple of years after my post, the now-iconic How Not To Say The Wrong Thing piece ran in the LA Times (with the brilliant accompanying “Ring Theory” graphic showing how to keep from being That Person) and went viral, and that is more how I wish I’d been able to organize my thoughts. My piece said “People can be real jerks and I wish they’d stop,” whereas the LA Times piece said, “Crisis is hard on everyone, but here’s how to make sure you’re not being a jerk.” It’s a kinder, gentler approach.

In the spirit of growing and learning (and surviving, though sometimes it may feel like just barely), I thought I’d revisit this topic from another angle; let’s forget about everyone else. Here are my rules for myself when times are tough, as I both take responsibility for my own choices and free myself from the guilt that can accompany them if I get too mired in “shoulds.”

Rule 1: Be gentle with yourself. Much as the bible says the first commandment encompasses all of the ones which follow, if you can latch on to only one rule here, this is the one to follow (and the rest really are just refinements). When life is hard, being hard on yourself is counterproductive and makes everything worse. I’d love to live in a world where we’re kind to ourselves and others all the time, but at the very least, cut yourself some slack when you’re struggling. Life is hard enough. When you’re tempted to berate yourself, stop and consider how you’d treat your best friend in the same situation… then show yourself that same kindness.

Rule 2: Forgive yourself. You are going to make some poor choices when you’re stressed. You might snap at a family member or write a strongly-worded post that you later regret. Mistakes will be made. Ask for forgiveness, when necessary, and then forgive yourself for being human.

Rule 3: There are no calories in crisis-time food. It’s never more important to take good care of yourself than when life is stressful, but there’s also a reason we call some things “comfort food.” So no, probably you don’t want to be eating a whole cheesecake for breakfast every morning, or anything, but just to give you an example, I try to keep my diet fairly healthy, but have a long-held personal rule that french fries or ice cream purchased on the way either to or from the hospital are “freebies.” That’s just how it is. Snacks are not going to solve a true crisis, but fretting over calories when you’re barely eating or sleeping isn’t going to help, either. Eat the damn fries. (Quick note/corollary: Although I’m a social drinker, I stay away from alcohol entirely when life is really challenging—it would be too easy to overindulge, and I’d rather not risk getting into a dangerous coping pattern.)

Rule 4: Find a soothing activity. As a lifelong TV junkie, I’ll often plop down on the couch and watch all manner of mindless programming just to stop thinking about life. This isn’t the worst game plan in the world, but I don’t know that it really soothes me so much as it distracts me. I also enjoy complicated jigsaw puzzles, but sometimes they require more concentration than I can muster during a difficult time. After recently reading about how coloring can help even adults combat stress, I have come to learn that I love coloring and find it totally relaxing. (This is a huge revelation to me, as I feel like the least artsy person on the planet, and I don’t recall being into coloring even as a kid.) My current favorite source for fun coloring is Don’t Eat The Paste’s extensive collection of printable mandalas. Bonus: This is a great activity to share with a stress-prone kid, too.

Rule 5: As the song says, let it go. No one ever died from eating blue box mac-and-cheese instead of a home-cooked meal. Dust bunnies are not a life-and-death situation. Laundry that sits neglected in a basket for a week or more is not going to spark an international crisis, not even if you eventually run out of clean underwear. Take care of yourself. Take care of your family. Let the minutiae go. If you find it soothing to do the dishes, go for it. If they pile up in the sink because you don’t have the energy, that’s okay. Life will eventually return to some semblance of normalcy, but until then, who cares?

Rule 6: Sleep whenever you can. Remember when you had a newborn and people told you to “sleep when the baby sleeps?” Stress is hard on the brain and body, and you need sleep to repair. If you can’t sleep at night (either due to the logistics of your particular crisis or insomnia), try to nap. If someone offers to come help you in some way so that you can catch a few Zs, say yes. For me, sleep deprivation is the fast lane to InabilityToCopeVille. Sleeping isn’t selfish or lazy. It’s survival.

Rule 7: Appreciate the helpers, inside and out loud. Some people are good in a crisis. Some people are not. The people who check on you and love you are a blessing and should be told as much. The people who “should” be there for you but aren’t… well, don’t waste precious energy on ’em. Tell the people who nurture you how much you appreciate them. And here’s a secret: for every time you’re tempted to believe someone is letting you down when you need them most, someone you never imagined would be a valued support will step up out of nowhere and hold you up for a while. Concentrate on your gratitude rather than your disappointment. Saying thank you is good for everyone, too.

Here’s to a life free of troubles and hardship. Barring that, here’s to dealing with it as gracefully as possible.

[…] I am still trying to grow as a person and life still sometimes sucks, I wrote you a piece about taking care of yourself during a life crisis. I hope it is an improvement over the time I word-barfed about someone being thoughtless towards me […]

We just went through a mini crisis with my 10 year old son having to have his appendix removed.  He is doing well and did pretty much what you wrote is what I did.

Remember is someone is asking to help take the offer and run.   My sister in law called my mother in law to let her know surgery started.  Also, I requested to let her know that we would call after our bite to eat.   Then my husband and I could eat dinner quietly.   it was truly a blessing.