Twitter Facebook Pin It Email Article
Prev Gift Ideas for Expectant Mothers Next The SAHM Gig: What Am I Supposed To DO All Day?
Pregnancy

When You Tear Down There: How to Heal, Cope & Learn to Laugh About it Later 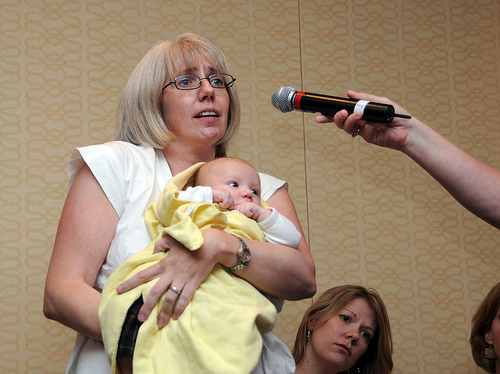 Okay, guys. This week’s topic is probably not a fun one. Probably not a lunchtime one, either. We’re talking tears and episiotomies and stitches and the not-so-glorious aftereffects of vaginal childbirth. So…yeah. Put down the lo mein. Since this is another one of those topics that I do not have any personal experience with (my stitches are a little higher north, in a less-delicate area), I decided to interview the Internet’s very own Queen of the Frankenvulva, Catherine Conners of Her Bad Mother. I was pregnant when I first read her account of Speed Racer Childbirth, and yes, it scared the everloving crap out of me but I survived and so did she and so will you. So buck up, little campers. And for those of you with similar battle scars, I salute you, and (as always) encourage you to offer your own insights in the comments section.

Q. Well. So. This marks an important first for me, both as a writer and as a human being, as I don’t believe I’ve ever asked someone specifically about the state of her vagina. But, hey, tell me about what happened to your vagina.

Well, it actually happened to my vaginal tissue and perineal muscles and – ahem – anus. Which, no, I wouldn’t have known to make those distinction either, if it hadn’t been torn to shreds and someone had to say OH HAI WE NEED TO REPAIR YOUR PERINEUM AREA.

What happened, in the most basic and non-descriptive terms: my second child, my son Jasper, came really, really fast. Like, crowned while we were speeding down the highway to the hospital fast. They call it “precipitous labor” — labor that takes less than 3 hours. In my case, 3 hours would have been a luxury. First contraction to baby exploding out of my parts: 40 minutes. Yes, it’s terrifying. And yes, that exploding part: TRUE. When a baby comes really fast, there’s no time for the birth canal to adapt to his passage. Normally, the canal (down on through the ol’ tunnel we call the vagina) graaaaadually expands to accommodate the giant creature comin’ on out of your belly. So do your lady parts, such that although some tearing (or episiotomy, which is cutting, which: shudder) is pretty normal. But when baby makes a speedy exit, he basically just blasts his way out. Makes his own exit. TEARS YOU A NEW ASSHOLE. For reals.

Which they had to surgically repair right there, right after baby blasted out. Oh, don’t worry, they gave me a little topical freezing. And a Tylenol. And when one of the doctors accidentally stitched his finger to my vulva, I didn’t even notice, because I was already screaming.

Q. Oh. My. God. How do you recover from something like that, both physically and mentally? Because DUDE.

SLOWLY. Seriously. VERY SLOWLY. It was a borderline fourth degree tear, which means that although it could have been worse, it couldn’t have been *much* worse.

I had to stay off my feet for about five weeks after the birth, so that it would heal. That kind of sucked, but when you`re terrified of moving your legs apart, long strolls aren’t really on the agenda.

Q. Again: God. Also: Oh. My. What kind of follow-up medical care did you need? What’s the “usual” recovery time?

As I said, I had to stay off my feet for about five weeks, but I had a pretty serious tear. Ordinary tears (of the sort that I had with my first pregnancy) heal pretty quickly, and you don’t have to go on bed rest or anything, but a blast site needs special care and tending.

But there was some added difficulty — the repair wasn’t perfectly done (which my doctor said was totally understandable, given that it was done in emergency circumstances. “There would have been lots of blood,” she said, unnecessarily. “It would have been difficult for them to see what they were doing.” Which is why Doogie Howser stitched his finger to my parts, I suppose) which meant that I was uncomfortable for longer than I might otherwise have been, because it didn’t heal properly.

Q. I cannot even believe I’m going to ask this, but…sex? Yay? Nay?

That took MONTHS. It was advised against, but seriously, like you’re going to be tempted when your nethers are held together by a sloppy cross-stitch. For a few weeks I told my husband that I was never having sex again. Thankfully, he didn’t believe me.

Q. I’m picturing some poor pregnant woman out there, shaking with absolute terror, wishing she could unread everything that’s she’s just read.. Any words of advice for her or tips to avoid this level of damage?

I know. I felt terribly after I posted the story at my blog, because a lot of the early comments were all OH MAH GAWD AM NEVER HAVING BABEEZ EVER. But seriously, third and fourth degree tears are rare — precipitous births are also rare, occurring in something like less than 2% of all births — and if your birth is otherwise straightforward, you probably won’t even notice. Especially if you get the drugs — which I couldn’t, because my nether-blaster baby came too fast — you won’t feel it, but even if you don’t, you probably won’t even be aware of the moment of tearing. I mean, I just remember that the whole thing hurt, not that there was a blast.

For me, it was the surgery-without-anesthesia afterward that was most traumatic (and the almost-giving-birth-on-the-highway); I don`t remember any specifics like oh hai there goes mah anus! And most regular tears heal pretty quickly. And seriously, if you’re worried about whether you’ll be up for sex and tennis within a week or two of having birth, you’re an alien and you’ll probably hatch your offspring and so none of this applies to you.

Some midwives and doulas recommend perineal massage to get the area ready for all the stretching that it’s going to have to do, but I don’t know that I would have been up for that even had I known how my labor was going to play out. Talk to your doctor if you’re worried. But seriously, there’s so much going in labor that’s uncomfortable that under ordinary circumstances you’re really not singling any one thing out to be bothered by. And end of the day, when they put your baby arms and he looks at you and your heart explodes, nothing else matters.