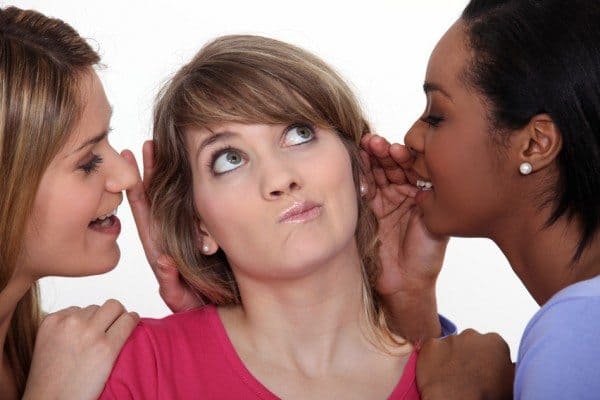 The Worst Support Group in the World

I need your advice. Over a year ago I had a miscarriage and joined a “support group” for …well, support. However, this group turned out to be a bunch of catty women who spent their time hating everyone and wishing ill-will on every pregnant woman they could. I became disgusted with their actions and the negative energy they gave me. I’m the kind of person who absorbs whatever energy is around me. I had hung around with them for almost a year.

After breaking away from the group I became pregnant for the second time. One of the other girls in the group got “exiled”, as I call it, for reasons unknown to me. I remained friends with her because she had never hurt me or been mean to me. I’m now 13 weeks pregnant with this second pregnancy and she seems interested and caring.

However, every time I talk to her she brings up that old support group and informs me about how they are talking about us. Every time she mentions them it gives me anxiety. I broke off with that group because the energy they exuded was mean, nasty and unhealthy. They made me unhappy with all the mean things they would say about people. They would wish miscarriages on women! Having her tell me that they are talking about me sends my mind racing! Are they wishing harm upon my baby? I want nothing to do with them. I just want to be rid of them completely. Every time this friend brings them up, I either change the subject, ignore that she said anything or remind her that I don’t care about what they’re doing or saying. She says she doesn’t either and drops it but then brings them up next time.

I don’t know what to do. Hearing about them and knowing that they still talk about me gives me anxiety and I know that isn’t good for me or my baby. I can’t go the through the rest of my pregnancy (another 6 months) worried they are talking about me, wishing harm on my baby or god-forbid if anything bad did happen know that they would be celebrating my loss. What do I do about this friend? Do I just separate myself from her like I did them, keep reminding her or….what?

Ugh. Ladies — hell, HUMAN BEINGS — of the world, exhibit A on How Not To Be.

Step One: You tell this friend in firm, strong language that you don’t want to hear about That Group. Full Stop. The subject is upsetting to you and therefore, is no longer going to be discussed, mentioned or gossiped about. No changing the subject, no ignoring, and DEFINITELY no “I don’t care about what they’re doing or saying,” because YOU ACTUALLY REALLY STILL DO CARE.

(And that’s okay! A lot of us like to swear up and down that we don’t care about what ex-friends/boyfriends/anonymous-people-saying-mean-things-on-a-message board think of us. And then we wake up at 3 a.m. composing useless, long-winded replies and arguments in our heads to them, because they’ve just got us ALL WRONG and we can CONVINCE THEM!)

Be brutally, bluntly honest with her that, in light of your previous loss, you’re having an understandably high level of anxiety about this pregnancy and hearing any mention of That Group and their toxic gossip is sending it even higher.

If she mentions them again, that’s it. Cut ties. I’m willing to give her one more shot since I suspect you’ve been hiding your true feelings, and maybe been a little overly polite/wishy-washy in your responses to her, but once you make it clear that this subject is officially taboo and over and dunzo, she needs to respect that. It’s a perfectly reasonable request.

Side note: I’m kind of wondering where and how, exactly, she’s getting all this specific intel on That Group and their current discussion topics. Wasn’t she exiled? Am I missing something? Is she still friends with someone else there and getting things second- or third-hand? (She’s not still attending, right? RIGHT?)

It’s possible that you’ve befriended your neighborhood Drama Vampire, who is basically blowing things out of proportion because she’s got that opposite sort of personality to yours: The kind who actually LIKES being gossiped about and paid attention to (even — or especially — when it’s negative). Since it sounds like she didn’t leave the group of her own volition, she could be still really hung up on them. For her, imagining that they’re all still talking about her and being “jelus” or whatever is how she’s processing the rejection.

I’ve met people like this, and they tend to focus on and exaggerate the Many Wrong-y Wrongs and Slings and Arrows that their enemies and the world in general are hurling at them. Talking with them gets exhausting, because they don’t ever let ANYTHING go and they tend to rank low on the ability to take personal responsibility for their problems and unhappiness. Take everything they say with a big heap of salt; it’s possible that all this “gossip” exists 99.9999% in her own mind, because she thinks it’ll bond the two of you together against common foes and haters.

But even if her gossip comes from the most reliable of sources and these women are bitching about you all the livelong day, it’s time for Step Two: Learning to block out that negative energy and deal with your anxiety.

From this moment forward, That Group has no power over you. They are beyond irrelevant. Their hatred and jealousy and callous bitterness will only circle back on itself, onto them, an ouroboros of unhappiness and broken friendships. (I mean, a “support” group of [I assume quite a few] TTC women that systematically turns on anyone who successfully conceives is going to fully cannibalize itself and collapse eventually, you know?) The negative energy cannot and will not touch you or your baby. Their words vanish into the vastness of the universe mere seconds after they say them, because those words are just stupid hot air from sad people.

Anxiety levels often shoot sky high during pregnancy, so I really want you to focus on dealing with yours. Yoga, meditation, deep breathing, visualization, putting down the pregnancy books and picking up something about — I don’t know — karma, the evil eye, religion, philosophy, happiness, whatever will help you understand how to turn your deep sensitivity to the energy of others into something more powerful and superhero-like. (Or maybe just some trashy novels about vampires, blasting workout songs about kicking ass and not giving a f*&#… mixed a little talk therapy.)

Recognize and accept that you do, in fact, care what other people think, and that you’re giving those people’s thoughts an incredible amount of power. So maybe there are some women who wish miscarriages on pregnant women. One time, I blew out some birthday candles and wished for a pony. GUESS WHAT. SAME RESULT.

Pregnancy is scary. So many things can go wrong and so many of those things are completely out of our control, so we focus on what we can control — sometimes to an excessive level, just trying to do everything super-duper perfect and “right.” That Group and it’s dumb opinions definitely fall in the category of things outside your control. Your reaction to it — the low-level buzz you’ve got going on, imagining what they’re saying, what they’d say if something went wrong — IS something you can control, though it’s admittedly a little tougher than just flipping off a light switch, when you’re a deeply sensitive person.

And thus we circle allllll the way back to step one, which is to stand up for yourself to your friend. And making a clean, clear break if need be, rather than a vague “distancing” or dodging her texts and phone calls. You are DONE talking, hearing and thinking about That Group. Not because they will hold any power over you otherwise, but because you’ve cut ties and moved on. If your friend insists on staying tangled up in their web, that’s sadly her problem to deal with. Maybe you guys don’t have that much in common after all, once you remove your shared experience with this circle of crazy people. You’ve got better, happier things to focus on.