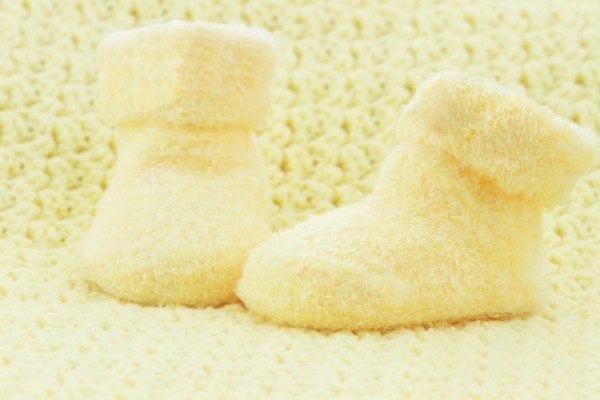 Hey wonderful! I hope you and the family are doing well.

I am 16 weeks pregnant, and we’ll be finding out the sex of the baby on August 4th (probably).

My problem is that I HATE how our culture is currently gender stereotyping babies before they’re even born! I can think of nothing as tasteless as these “gender reveal parties” that are all themed like “Glitter or Guns!” as if having a vagina means you can’t use a gun and having a penis means you won’t like glitter. (I think David Bowie would disagree.)

Ugh. The thought a headband with a flower bigger than my baby’s head makes my very bones ache.

Because of my strong feelings, I want all gender neutral items. Most of them are super cute, if harder to find! Who doesn’t love sweet, simple baby clothes emblazoned with bumble bees or foxes? To me, just about anything is gender neutral as long as it’s not obnoxiously gaudy or covered in “Big Man” slogans. This is also a great plan because we hope to have two children, and I love saving money.

The problem is that I’ve already had family members flat out tell me they won’t respect my wishes as a parent. I wanted to keep the sex of the baby private until the birth, but my boyfriend has flat out said he thinks not telling people is stupid. Plus, I tend to get bullied into things by my more vocal family members.

What do I do? I don’t want to be a Baby Showerzilla, but if someone tries to give me an outfit with “Born 2 Shop” written in scrolly letters on it, I might light it on fire. Honestly, our kids will be forced into specific gender roles as soon as they’re old enough to walk. Can’t I just let them be babies?

So first of all, I COMPLETELY AGREE WITH YOU. Gender stereotyping is stupid. Insidious and dangerous, even. The next person who tells me to cut all my 3 year old’s gorgeous blond ringlets off because he’s supposed “to look like a boy” or hints that I’m damaging him somehow by keeping his hair long is going to get a screed and a half on what “looking” like a boy even means and their outdated assumptions about gender and sexual identity because come on, just say what you REALLY think: You think little boys with long hair or who play with dolls are icky gay or something.

Imma gonna suggest you figure out a way to unclench your rage-hands a little and let the baby clothes issue roll off your back, a little bit. Figure out a way to smile and say, “thank you!” when given a gift you don’t like or want. Then you return the flower headbands or SPOILED LIL DIVA onesies to the store, or donate them.

Be strategic with your Baby Registry

Fill your baby registry with gear and practical stuff — not clothing. Most people are completely chill with buying gender-neutral strollers, crib sheets, Pack-n-Plays, etc., since they know it’s being purchased with future babies in mind. Register for all the gender-neutral swaddling blankets and nursery decor you want. Then take a deep breath and remember that you cannot dictate that everyone follow your exact wishes when it comes to the registry and gifts, and that’s okay. I know it’s HARD when you receive gifts from people who know your preferences but are openly defying them, like ha ha I think your beliefs are silly and I’m rubbing your face in it via a hot-pink onesie, but you’re going to need to be the bigger person. Practice that big smile and fake a “thank you! this is so cute!” You aren’t going to change anyone’s mind about gender stereotyping by being angry/seething/ungrateful about the issue all the time.

Personally, the baby clothes thing didn’t bother me as fiercely as it bothers you, and let me try to explain why. We had plenty of gender-neutral clothing and accessories, and plenty of onesies with trucks and baseballs on them. The point of the gendered-baby clothes is just to maybe save people from having to ask you if your baby is a boy or a girl. And for your baby to not be naked. And for your baby to barf or poop on. And in the grand scheme of gender stereotyping, pink and blue baby clothes are hardly the hill I felt like dying on.

My concerns come later, when it comes to my children choosing their interests and activities and role models. I don’t want anyone telling them they couldn’t get a doll and a baby stroller for their birthday, or if they did it automatically needed to be the blue one, when maybe they preferred the pink or purple. I don’t want them to never be exposed to strong female characters in books or TV or movies. And I don’t want them to look down on “girl” things like princesses or pink, and thus look down on the girls they know who like those things.

This stuff? Is much harder. Your influence only goes so far, once they’re out in the world, going to school and making new friends and under the watch of other adults. Returning blue footie pajamas and exchanging them for a yellow set is pretty easy, in retrospect.

The real issue here is respect for your wishes

The bigger, tougher problem I get from your email is that you seem to be surrounded by people who don’t respect you, and who are openly planning to defy your wishes on this for years to come. Which is probably why you have chosen the baby clothing issue as the ONE THING you hope to control, and your family won’t even let you HAVE THIS ONE THING, which, RAAAAGGGGEEE. (I’m going to hope, by the way, that your discussion with your boyfriend over the possibility of just keeping your baby’s sex private until the birth went deeper than just him telling you that your [perfectly reasonable, given the circumstances and your strong feelings] idea was “stupid.”) I completely, totally understand your frustration. But believe me, a baby shower full of yellow and green is not going to “solve” the underlying lack of respect and bullying problem.

This column now seems like its contradicting itself, since I started out telling you to relax and put on a fake happy face when given gifts you don’t like but then I’m talking about standing up for yourself to these bullying family members. (“That’s what I’m trying to DO, Amy. GOD.”) I guess I’m more concerned about your overall war than this one particular battle, since you’re presumably going to be the one who dresses your baby every day and can skip over the newborn tutus and tiaras in favor of ducks and frogs. But if people “flat-out” telling you your ideas and preferences are “stupid” and won’t be respected, that’s a much more serious problem and will bleed into who knows how many aspects of your parenting and life.

Consider talking to a therapist

I feel like I’ve been resorting to the “maybe a therapist can help” line of advice giving more and more lately, but hey, maybe talking to a therapist about your family would help give you insight on why this is happening and how best to stand up for yourself — hopefully in a situation that doesn’t involve lighting a pile of shower gifts on fire with your mind.