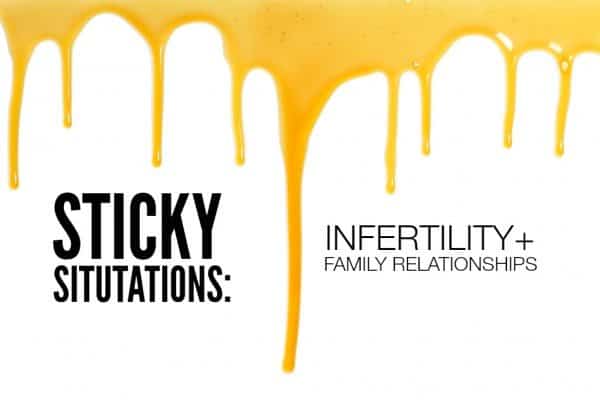 Infertility in the Family

I have read your blog for four years, and I love it. I especially love reading the Advice Smackdown questions and answers from all your readers. Anyway, I have a question I hope you can help me with.

I have two boys, 4.5 and 1.5, and am currently pregnant with my third baby, due in October. I’m 34, married (we cloth diaper-thank you for all the wonderful advice!) and my husband and I are self employed running a busy farm which is fun and chaotic and messy (oh my gosh so messy!), but is a life I wouldn’t trade.

Anyway, my actual question concerns my cousin. Who is 38. Married. Wants children. Trying to have them. Is not succeeding. When I was pregnant with my second boy, I called her and told her personally, early, and she was really sweet about it, but that was the end of talking about it. I emailed her about this third pregnancy to personally tell her about it before anyone else, and got no response.

I’ve spoken with her several times since, but we talk about her house, her dogs, the renovations on her house…everything and anything but babies, and little boys. I’m careful not to bring up anything about how I’m feeling or how the boys are and she doesn’t ask. I know this must be really difficult for her, so I’m a little concerned how to act when I do see her this summer.

Oh, and she never talks about trying to get pregnant, or babies or anything, but I know she has always wanted children. We USED to talk about it. Anyway, our family gets together every summer, and I know I will see her for about a week and I will be obviously pregnant with two little boys running in and out of the house all day. I’m not sure exactly what I’m looking for, except maybe some advice on how to proceed?

We don’t talk all that often, but I don’t want this to become a rift in our slightly difficult relationship (she has always seen herself as older and wiser and has a sort of patting-on-the-head attitude about my life which can make me roll my eyes). But I love her and have always loved spending time with her and we live across the country from each other so I really do cherish seeing her during the summers. I am worried because her mother (my mother’s sister) had a really awful time getting pregnant and then finally had my cousin after many years of fertility treatment. Then my mom had me a few years later, and then quickly had two more kids. This caused a terrible rift between them which took 20 YEARS to heal. 20 YEARS. I don’t want that to happen with my cousin.

Any advice would be appreciated.
Uncertain

This is always a super difficult topic to address, particularly when we’re only hearing from the fertile half of the relationship. Because we’re left to guess how the other half really feels, which can be anything from genuinely happy, indifferently over it, slightly-to-very jealous, annoyed over any kid-glove treatment, or just plain ragingly bitter at the entire freaking pregnant world.

And I admit that back when I was having difficulties conceiving my first (and my second, to a lesser degree), I probably felt all of those things, depending on who the pregnant lady in question was. A relative, or a good friend who also struggled? ZOMG I AM SO HAPPY LET ME BUY YOU BABY THINGS! Woman at work who I don’t know very well? Meh, kinda jealous, going to work out new path to bathroom so I don’t have to walk past her office. Woman I just plain never liked in the first place? HATE. WHITE HOT IRRATIONAL HAAAATE.

That last one, by the way, I’m not proud of. It wasn’t their “fault,” there isn’t some finite amount of fertility going around so other people’s successes would not ever affect my outcome, and feeling angry and rage-y about it certainly wasn’t good for me. Ultimately, whatever my reaction was, however, it really was on me to deal with and control, and to keep it from affecting (or even ruining) friendships and relationships.

After reading your letter, it sounds like your cousin is doing what she can to minimize the effect her fertility struggle has on her interactions with you and thus preserve the friendship, in her own way. She didn’t respond to your email, but maybe at the time she just didn’t have a “congratulations” in her. Maybe she’d just gotten a period or bad news from the clinic and chose to stay silent rather than say something petty or angry that she’d regret. She keeps conversations on neutral topics with you, prefers not to discuss the ins and outs of her treatment plan or efforts conceiving. You USED to talk about these things, but you don’t anymore. I think that’s probably okay. That happens, as we move into wildly different stages/phases of our lives with people we’ve known from past stages/phases. The current conversation boundaries are probably her choice, so it’s best to respect that.

Maybe she’s no longer seeking treatment and instead is working on finding contentment with a child-free life, with her dogs and a great home and all sorts other things that are genuinely important to her. Maybe she is still hoping for a child, but the last thing she probably wants is pity, or mothers who say boneheaded, smug things about children being the most validating important thing and way more meaningful than dogs or careers or whatever. (NOT saying that YOU would ever say stuff like that — and her careful avoidance of even the briefest inquiry about your children IS a bit of warning sign that no, she’s still not over this, or in a place where she’s able to find joy in being a special cousin-auntie-friend to your boys.)

As for seeing her in person this summer: Be genuine. Be yourself. Tell her how happy you are to see her and how much you cherish your time together. Ask how she’s doing, but don’t try to dig for details she doesn’t want to volunteer or topics you “used” to talk about. If she wants to stick to her dogs and dinner plans, so be it. Don’t bitch constantly about how pregnancy sucks and your kids are so wild, but don’t swing too far in the other “I AM A MAGICAL GODDESS BLESSED WITH MULTIPLE LIFE-FULFILLING ANGELS” direction either.

On the other hand, your children are there, and they exist. So does your belly. There’s only so much accommodating you can do. Again, a lot of this IS on her. (I know the tabloids love shrieking about celebrities having the audacity to FLAUNT THAT BABY BUMP!!1! any time a woman like, dares to go out in public while pregnant. You are not flaunting anything. You are human being who exists, while doing something that is required for human beings to continue to exist.) Hopefully she is also aware of your family’s unfortunate history and your mothers’ rift, and is similarly driven to not let that happen. Because again: You aren’t hogging the family’s fertility ration, here. It’s up to her to separate her jealousy or sadness from you, the person who she loves and wants good things for, much like you want good things for her, be it the baby she’s always hoped for, or peace and contentment with other things in life.

You two might continue to always have a complicated relationship that drifts ever more to the surface instead of growing closer and into equal confidantes. Accept that. Support and love her without pity or false empathy, while recognizing that while life is unfair, that is not your fault and you shouldn’t made to feel like your very presence is hurtful (and that goes for your children, too), or like, HOW DARE YOU KEEP HAVING CHILDREN THAT YOU WANT TO CONTINUE HAVING. If she can’t be in your presence or behave kindly or appropriately towards you or your children, that’s on her to work out, not for you to apologize or feel badly about. But it sounds like she’s built up some boundaries that she’s okay with, and isn’t so raw and sensitive that she’s canceling plans or screening out your calls completely. That’s good. That’ll do. I think you two will be okay, for now, for the long run.