Twitter Facebook Pin It Email Article
Prev Lesson Learned: Should You Come Clean About Your Pregnancy When Interviewing for A Job? Next To Tubal Or Not To Tubal 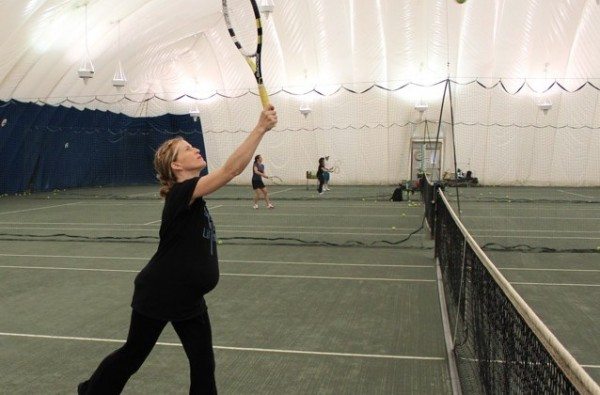 During my first pregnancy, a woman heckled me on the street. “That’s horrible for your baby!” she yelled from across the street.

I wasn’t smoking cigarette. Or chugging a bottle of Colt 45. Or eating 6 day old raw fish from the garbage dumpster behind The Sushi Palace.

I was eating a frozen yogurt. Yup. That’s it. And that’s when I came to understand that once you get pregnant and bring children into this world, there are a lot of people out there who feel obligated to protect your child. The whole, “It takes a village” except these villagers can seem a little judgmental.

I have encountered some sort of shaming during every pregnancy. Except it’s not about frozen yogurt this time around.  It’s about tennis.

I have always tried to stay physically active during my pregnancies because it’s prevents major weight gain and just makes me feel better, physically and mentally.  I’m not out training for an Ironman. I’m attempting to stay active and healthy.

(DISCLAIMER: Any pregnant woman should talk to her doctor before starting any kind of exercise routine. I am not a doctor. Although I can rock a white lab coat and stethoscope.)

In my previous pregnancies, I did a lot of prenatal yoga. But then I somehow burned out on downward dogs and just couldn’t find the time anymore with kids to get myself to a yoga class. Tennis seemed like the perfect replacement. I love the sport and my doctor said, continuing throughout my pregnancy was not a problem as long as I felt up to it.

I’ve gotten a range of different reactions.  Some people are in complete shock and their jaws drop open as they stare at me with bewilderment. Others make comments like, “Wow.  You’re playing tennis?! My doctor told me it was not a good idea to play tennis because you could easily fall.”  And some reactions have been more mild like, “I can’t believe you are still out on the tennis court. When I was pregnant, I just took nice walks.”

And sometimes I get the idea that people would prefer all together if pregnant women would just lounge around, only getting up to prepare the hearth for the new arrival.

But the reality is, according to the American College of Obstetricians and Gynecologists (ACOG), exercising 30 minutes daily can benefit your health during pregnancy. It helps reduce symptoms like backaches and swelling, prevents and treats gestational diabetes, increases your energy, aids in sleeping and may improve your ability to cope with labor.

However, ACOG does not recommend activities in which there is a high risk of falling, such as gymnastics, water skiing, and horseback riding.  Now, I guess there is a risk to falling in tennis but I feel like I have the same risk when I’m rushing down the stairs in the morning, while stepping over toys and trying to shepherd my four kids out the door.

ACOG also suggests avoiding activities that call for jumping, jarring motions, or quick changes in direction that may strain your joints and cause injury. Hmm… that does start to sound a lot like tennis.

But I have never felt like I was putting my myself or my baby in danger. I am careful when I play tennis. I play doubles because it requires much less running, I always move balls out of the way and I don’t push myself too hard.  Plus, I have the approval of my doctor.

My baby is doing great. And my best pregnant days (of mind, body and spirit) are after I’ve had some time out on the courts.