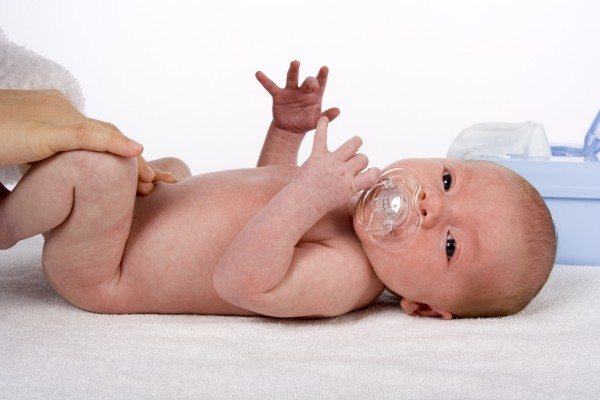 I’m 12 weeks pregnant and planning ahead. (Also, too sick to do any real work.) I definitely want to cloth diaper, and based on your recommendations and others, I’m going to register for some FuzziBunz and BumGenius one-sizes. However, I’ve heard that the one sizes just aren’t small enough for newborns. I’m thinking about getting some prefolds and covers for those first couple months.

I really want cloth diapering to go well right from the start, because my husband is a pediatric ICU nurse and therefore already an expert on baby care, and he’s wary about the whole cloth diapering thing. I’m afraid that if we have a lot of leaks and/or blow-outs at first, he’ll want to give up and go straight to disposables. He’ll change a lot of diapers, so his opinion matters.

(Sorry, but by the third baby, there’s so much accumulated hand-me-down crap lying around that you don’t have many new decisions to obsess over. SO DIAPERS IT IS.)

We are planning to use prefolds and covers for the first weeks/months this time around. Now, I’ve never cloth-diapered a newborn. I didn’t make the switch last time until Ezra was big enough to go directly to the one-sized/sized pocket diapers. Both of the boys wore disposables as newborns, and let me tell you, disposables are BLOW-OUT CENTRAL. Just putting that out there. They are superior for leaks, because they hold more (and aren’t affected by stuff like your water and detergent type), but poop. Oh, poop. I dealt with so many blow-outs up the back and up to the armpits early on, and I am not exaggerating at all. When I complained, people told me to switch to cloth, and I (of course) thought they were crazy-crazed-craze-pants, but dammit, the day I slapped a FuzziBunz on Ezra’s butt was The Day The Blow-Outs Ended Forever.

Leaks were another story, since it took me awhile to adjust to the absorbency level of cloth vs. what I was used to with a disposable. But once I saw the benefits of changing wet clothes vs. poop-stained monstrosities oh God how did it get in your HAIR, along with the fact that Ezra no longer struggled with diaper rash, I was more than sold on cloth diapers. Basically: both cloth and disposables have their benefits and shortcomings. Everybody probably ranks the pros and cons differently. Just make sure your husband understands that even the mighty Pampers Swaddler is not perfect, and neither are cloth diapers. No matter what you choose, you WILL get up close and personal with your baby’s waste sooner or later, be it in on their clothes, their bodies, your hands, your clothes, in the diaper pail or the washing machine, the end.

So! Now! Back to the newborn discussion. We originally planned to skip cloth at first and wait for our existing stash of various pocket diapers (bumGenius, Charlie Banana, FuzziBunz) to fit. I bought a few of the spiffy new one-sized FuzziBunz (only the sized option was available back when I first switched, so I have Mediums) and set those aside, and contacted someone on Etsy about converting the worn-out velcro on my bumGenius to rows of snaps). Done!

Or…not. The aforementioned restless third-baby syndrome started, and to my surprise, my husband actually voiced an OBJECTION to the plan, saying that he preferred to skip disposables altogether this time, if possible. (Yes, he changes diapers, he washes diapers, and he is a die-hard cloth diaper convert and fan. It happens!)

I looked into a diaper service but ultimately decided that it wasn’t worth it for us, since we will probably still be washing diapers for Ezra (don’t ask, and don’t believe everybody who swears that allllll cloth-diapered babies train “early” and “easy” and OH MY GOD THAT CHILD IS KILLING ME HERE WITH THE STUBBORNNESS). And we’d still be washing the new baby’s diaper covers, and…really, I’m no longer intimidated by the “laundry” part of cloth diapering, at all. Even my husband was like, “No, we can wash them ourselves, whatever.” Plus, from experience, I know that any newborn prefolds we buy will remain incredibly useful long after the baby switches to the pocket diapers. Burp cloths, nighttime doublers, emergency inserts, general household cleaning rags, etc. Prefold diapers are the multi-purposing BOMB.

So after consulting friends, the Internet, Twitter, more Internet, we settled on building a stash of two to three dozen prefolds and five to six waterproof covers. Not really interested in trying out pins or those snappy things, honestly, though I know some people love them. The covers are just more similar to the system I’m familiar with. I bought 12 of the super-small preemie size (4-9 pounds) and 24 of the newborn size (7-20 pounds). (Thanks to my Amazon Prime addiction, they’re a weird hodgepodge of Bummis Organic and diaper-service quality Chinese and Indian varieties, though I also really like Green Mountain Diapers’ offerings but am trying to rein myself in.) I have about five covers (Thirsties, Bummis, and a couple from Etsy). If that’s not enough and I have to buy more and/or different sizes, I will not be sad. Because OMG SO CUTE I WANT A MILLION OF THEM. Now I have to start washing and fluffing the prefolds and find something new to obsess over.

If Noah had been my only experience with babies, I probably would have skipped the smaller-size prefold entirely — he was 9 pounds, 15 ounces at birth, and was too big for anything “newborn” sized. I deliberately refused to get anything tiny the second time around, buying nothing but 0-3 months for Ezra…who was 7 pounds, 7 ounces. And in the six-pound range by the time we brought him home. Where he had NO CLOTHES OR DIAPERS THAT FIT HIM. Brilliant move, Amy.

So this time I’m trying to prepare for either possibility, though the beauty of prefolds is that you can always fold sides down and in until a bigger rectangle fits your baby. It’ll be bulky, but it’ll work. And like I said, even if we end up using those preemie diapers for all of two weeks, they will still be plenty useful for other purposes.

Yes, I will probably sneak a small package of Pampers into the house at some point, just to have as a back-up should a washing-machine disaster strike or I realize I’ve made some other massive diaper-related miscalculation. And I certainly plan to hoard every teensy-tiny disposable diaper I come across during my hospital stay. Be flexible, dude. If you do end up using half and half at first, or ditching the prefolds entirely, it really doesn’t mean that you’ve failed at cloth diapering and should give up on the idea entirely. You might love cloth right from the start, and convert your husband immediately with the cost-savings and his surprise that it isn’t at all as hard as he imagined, because diapers are all still just diapers. Or you might find that it’s just too much for the early months but still fall in love with the ease and convenience of the pocket diapers or all-in-ones or something completely different than what worked for us or for other cloth diaper fanatics.