Twitter Facebook Pin It Email Article
Prev How to Choose an OB/GYN Next Is It Safe To Color My Hair While Pregnant?
Baby

Here’s an etiquette question for you. I noticed on your Amalah blog that you’re just now getting to your second son’s birth announcements…

My son is four months old and I haven’t even ordered his announcements, much less mailed them. In my defense, he’s baby #2 (a) and (b) the card I’d chosen to use for his announcement was suddenly discontinued! I haven’t found anything else I liked as much since.

When is it too late to send birth announcements? 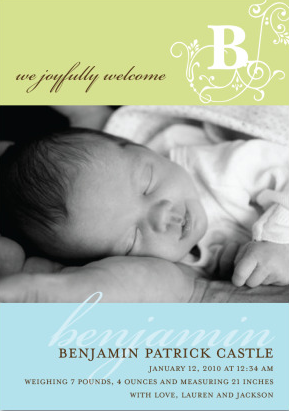 Six months. You have six months. Officially, and all that, according to the General Guiding Etiquette Guidelines.

I have my announcements, and have had them for a good two months now, sitting in a little pile on my kitchen table. They’re a lovely design, complete with a close-cropped photo of both the boys that we took at the hospital. I even ordered extra envelopes in case of spelling mistakes. I just…haven’t taken the time to sit down and actually ADDRESS them and mail them out.

Last time, I made out a list of everyone I planned to send announcements to before my due date. I compiled their addresses — with some help from my mom and mother-in-law — into a Word document so all I had to do was copy them onto envelopes. When Noah was three weeks old my mom came to visit and we spent an afternoon assembling the cards (an overly complicated card/photo/tissue/ribbon design) and mailed them the next morning.

This time I didn’t do the address list ahead of time, and I realize what a difference that made. Every time I turned on my laptop I saw the saved document sitting on the Desktop, reminding me about the announcements. This time I don’t even know if I have my one brother’s address, my sister’s is only saved in my list of previous order histories at Amazon, so-and-so has moved and Jason promised to get me a couple addresses for his family and hasn’t yet (I’d make him do his own list but after trying that with holiday cards once I know it simply will never happen). And so, instead of making do with the addresses I do have while trying to track down the rest (and once again realizing that this keeping everything on computers and cell phones instead of an old-school address book is NOT WORKING), I simply ignore the task. NOT GOOD.

I have three more months. I gave out a couple in person over the holidays, and am now starting to get into the realm of needing to include an additional, more recent photo of the baby (also considered polite if you have dragged your feet re: mailing the announcements). Who no longer looks like a squishy 7 pound, 7 ounce newborn.

So. You have two more months, if you’re aiming to stick to the official etiquette. If you can’t find a traditional birth announcement that you like, consider just making a generic card up with a photo of the whole family, or go for a holiday card instead and include a couple photos. Most people, I think, are only interested in those scintillating “birth stats” like weight and time of birth early on (although I hold on to announcements so I can be sure to remember birthdays going forward), and by six months (or later) would be more pleased to get a copy of a recent photo. (Again, this electronic world of emailed and blogged photos means I also am terrible about getting people actual, hard-copy photos for framing or just tacking up on the fridge.)