Twitter Facebook Pin It Email Article
Prev How to Help Kids Speak Out Against Injustices Next Potty Training Wars: The “I Won’t Go At School” Kid 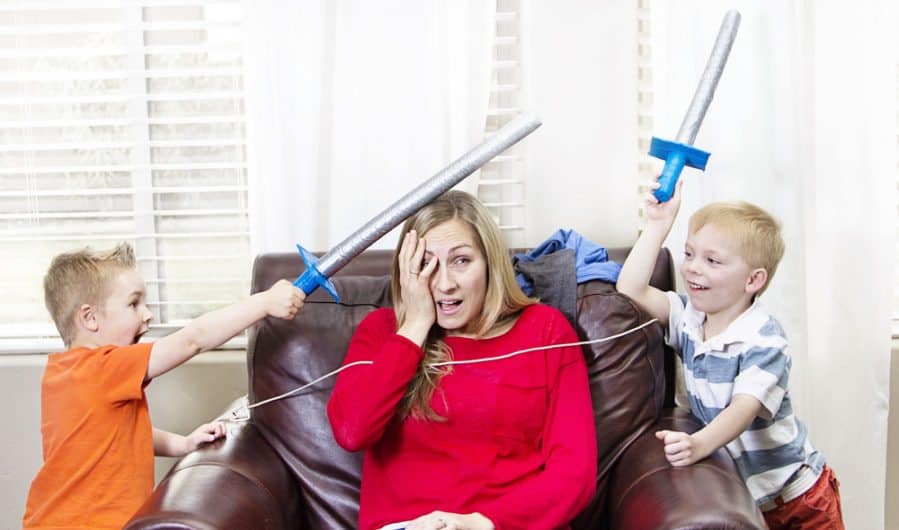 I am really hoping you can give me some advice. Before I had my oldest child I was a high school math teacher. When he was born I started a tutoring business. It was a great way to stay at home and still work. Two years ago I was offered a job working remotely for a brokerage firm. I really love the job, and most of the time the schedule is ideal. Except in the summer. You know, when the kids live here all day long.

I have 4 kids (ages 9, 8, 6, and 3). I have to work every morning from 8-11, and the rest of the hours I can do on my time. During the school year I usually work 35 hours a week, and in the summer I try and do 25. The first week the kids were home was awful. Really, really awful. I tried to have things for them to do and a checklist. They fought constantly and were interrupting me every 3 seconds. I have to take a lot of calls in the morning, so that doesn’t go over well. Each day I would end up caving and just allowing a lot of screen time. My kids have been visiting grandparents the last few weeks and I’ve gotten a shitload of work done.

We leave tomorrow for Europe and that will bring me to the end of July. I really have no idea what to do for the last 4 weeks of summer. We live in a really small rural town, and camps aren’t really an option. Most of them are just a few hours (and don’t start until 9) and there is nothing I can find for the three year old. I could get a babysitter, but that’s a lot of money to watch all four kids five days a week for a month.

I know you work from home, so do you have any great suggestions? Do I just suck it up and pay for a babysitter? Any advice is appreciated.

Ohhhhh am I right there with you, lady. Working from home in the summer, with multiple children who are just so HERE and LOUD and INCAPABLE of staying off each others’ nerves (and mine), is very, very challenging. I signed my kids up for as many camps as possible (we use my husband’s flex spending account to get as much coverage as we can), and I’m still facing down multiple weeks of trying to work while all three of them are home and camp-less. This is one of those weeks! Hopefully I can type a few paragraphs for you without too many interruptions.

(Six year old just entered office to show me his Captain Underpants costume, which is exactly what you’d expect.)

So I don’t know if this is an option for you, but instead of a full-priced bona fide babysitter, try to find a younger “mother’s helper” sort of arrangement. This could be a kid on the cusp of babysitting age (like 11-12) who isn’t ready to be left completely alone and unsupervised with children, but who can be trusted to run interference and supervise just enough to keep them out of your hair. We’re using the 13-year-old younger brother of one of our college-aged babysitters starting next week — he’s not charging much at all per hour as it’s more of an intern/gaining experience/reference building sort of thing for him.

(And my own 11 year old really doesn’t need to be “watched” per se; this is more to keep the younger two entertained and the arguing/squabbling to a minimum. The mother’s helper tasks are mostly about keeping everybody away from my office and not letting them completely trash the house in the meantime.)

(Oh. Said 11 year old just entered office to tell me about a dream he had last night. I was there! Fascinating!)

This week, we’re just going to muddle along the best we can. I do the personalized chore checklist/schedule thing (and try to avoid too many collaborative or team-based chores since I’ll just hear about who isn’t pulling their weight every 30 seconds), and yes, screen time is the reward for getting everything on the list done. The faster they power through their list (which also includes non-chore stuff like “play outside for X time” and “have a snack” and “draw a comic book”), the more screen time they get at the end of the day. Which: Well, that is what it is, because you have to do what you have to do.

Your kids’ ages make this approach tough, since a 3 year old is just going to need/expect more supervision and entertainment than the older ones. I definitely relied on PBS Kids and Nick Jr. a LOT more when I had a kid under 5 in the summer. And there probably aren’t three solid hours’ worth of unsupervised chores/activities you can assign to a kid that young. Is there an older one who they get along especially well with? Maybe you could assign an older sibling to be the 3yo’s “buddy” for the day, mother’s helper style, with an extra reward for no fighting or interruptions? I don’t know.

(Annnnnnnd the 8 year old just told me the 6 year old isn’t doing his half of the dishwasher and also showed him his butt. We have the interruption trifecta!)

In my “do-as-I-say-not-as-I’m-doing-this-week” experience, finding some actual proper childcare really does end up being “worth it” since 1) I actually can focus and do good work and thus make the moneys, and 2) I’m not constantly snapping and yelling at my children, which isn’t exactly #SummerMomGoals. If you can find a younger preteen or teenager eager to get some babysitting experience under their belt (and willing to do it for just a few dollars an hour), that’s probably your best bet. Or at least something you can aim to have in place for NEXT summer, when yay! We get to do this all over again.