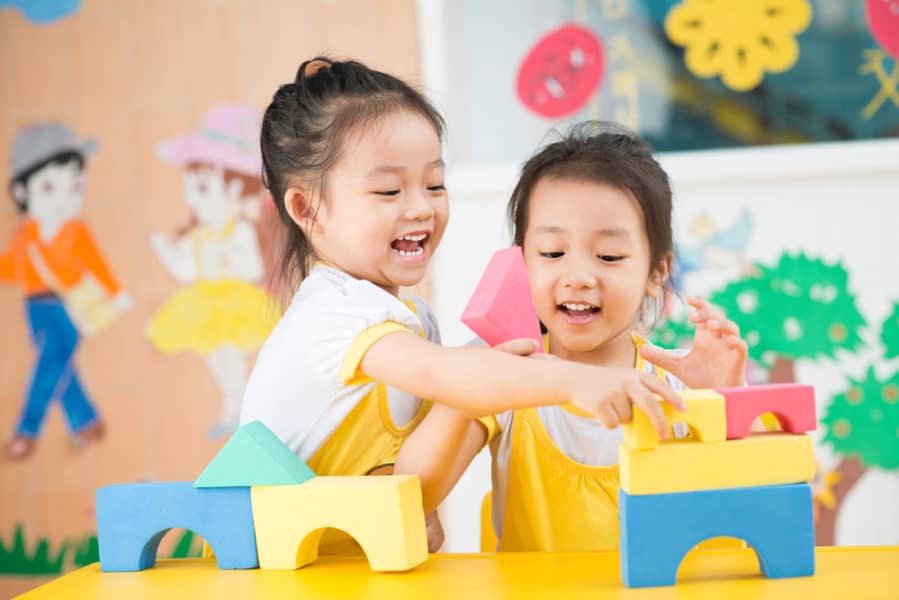 Do you have any advice or good resources when sorting out different pre-school and pre-K philosophies (e.g., play-based vs more academic kindergarten prep)? My just-turned 4 year old is in a multi-age daycare-preschool setting with kids ranging from 2-5 years old. The program is a play-based center with rough curriculum that can be adapted to a wide range of abilities, but very child-driven for much of the day. We have loved it so far, and she blossomed when she moved into the room – very much benefiting from hanging out with older kids.

The thing is, she is pretty advanced, and easily meets developmental milestones of ages 1 or 2 years older than her. When I look at “kindergarten readiness” checklists, she hits all the marks. I’m not saying she’s a child prodigy or anything, but my husband and I worry that she won’t be challenged enough in her current setting in the next year and a half before she can enter kindergarten. I’m struggling with weighing costs and benefits of moving her to a different program that might be a bit more structured with more kids closer to her own abilities. We do plenty of enrichment activities and practicing writing, reading and math at home, but mostly on the weekends since the kids are at daycare 9 hrs a day 5 days a week. I know all kids are different and there isn’t a single “right” answer here, but I don’t want her natural curiosity and desire to learn and build new skills to lapse because it isn’t fostered on a daily basis.

Probably overthinking things, but any advice or resources would be welcome!

I feel like I’ve been answering a lot of the recent questions with…more questions, but! Here is a question for you: Are you actually seeing any signs or real evidence that your daughter isn’t being challenged enough? That she actually is bored or frustrated or otherwise mentally checked out in her current class? Because it kinda sounds like the opposite: She’s happy, thriving (“blossoming,” even!), and gets the added social benefit of older peers.

Absolutely, it’s always good to stop and reassess any school or daycare arrangements periodically, and you’re right that there is no One True & Correct Universal Path to Kindergarten. But this seems very much like a “if it ain’t broke, don’t fix it” sort of situation.

I’ve been fortunate to raise all my children in very good school districts, albeit districts that are rightfully described as “pressure cookers.” So there was always (in my opinion) a lot of overvaluing the academic aspects of preschool and undervaluing the social and emotional aspects. And there’s definitely some logic in the idea that maybe preschool should mimic kindergarten more, with structured curriculum blocks and fewer play breaks and such, so your child will be “prepared” for the change.

But on the other hand, there’s a reason that kids don’t start kindergarten at 4 years old, even if they do check all the readiness boxes. There’s still that social-emotional development piece, and the general consensus is that children — even, or perhaps especially, gifted children — absolutely benefit from environments that nurture and stimulate those areas in these early years.

It sounds like you’ve found that, and I would worry a little about pulling her from an environment she loves and enjoys going to and potentially putting her in one where maybe…she doesn’t enjoy as much, thus undermining her (so far, stellar!) confidence about school in general.

Instead of looking at it like, “oh no, she’s just as smart as all the 5-year-olds, she must be bored!” try looking at it like, “she’s just as smart as all the 5-year-olds and probably knows it, and I bet that feels pretty great!” It’s okay to let her be the smart one, and I promise her natural brightness and receptive nature to learning will not be irrevocably snuffed out because she also gets lots of time to play. If anything, that’s a plus. (Young children learn through play! Play is super enormously important! Even science says so!)

And I say this next bit from the parenting trenches of late elementary/middle/transitioning to high school: She has sooooo many years of academic pressure, high expectations, and rigorous structure ahead of her, you know?

Would my answer be different if you were describing a kid who was suddenly acting out at school or melting down at drop-off? Probably! That could be a signal that this program was no longer a good fit for her. But the fact that, at 4 years old, she already hits all the marks for kindergarten readiness? That actually sounds like this program is doing a really good job.

And with all your at-home practice and support, plus enrichment activities…yeah. I think she’s going to be fine. Probably more than fine, and when she enters kindergarten she can then be assessed and put in groups with peers that match her reading and math abilities, or get identified for the Gifted & Talented track, or discover a lifelong passion for marine biology via some classroom turtles.

In the meantime, let her play!