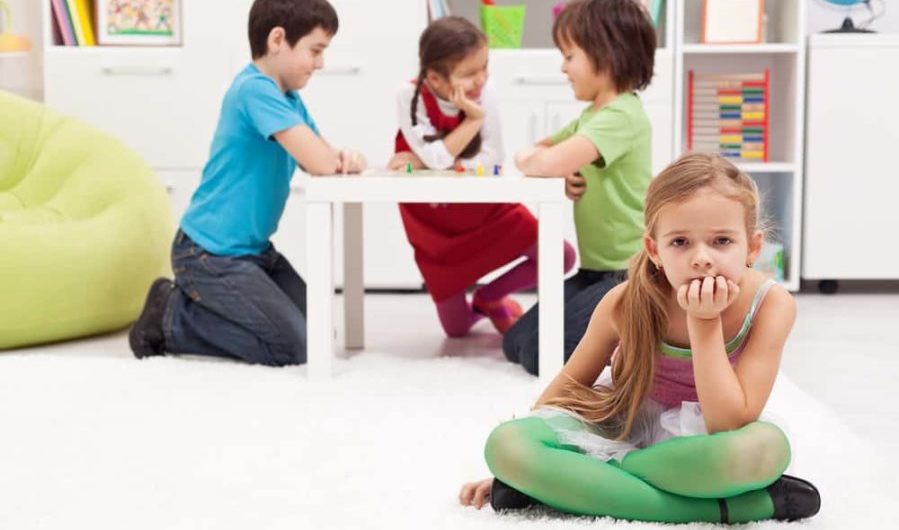 “No One Wants to Play With Me!” (and Other Preschool Exaggerations)

My daughter just turned 3 years old and loves her daycare. She’s in a mixed age class with 2 to 5 year olds with about 24 kids total. She has recently been making comments to me (in a fairly matter of fact way) that some of the kids don’t play with her. “Kid X doesn’t play with me” or “Kid Y doesn’t play with me. When I was little Kid Y played with me more often” [Kid Y is nearly the same age and they’ve been in daycare together for 2.5 years]. “Kid Y and Kid Z were playing super rings” (I asked if she also played super rings, which she made sound very exciting) “No. Kid Y said I couldn’t play with them.”

I asked her how that made her feel and she said sad. I also know that the teachers encourage inclusion, “You either play with everyone or by yourself” (at least according to my 3 year old, so that may not be an exact quote). She still seems pretty happy and generally excited to go to daycare. She loves her teachers and I know she plays with some kids (and who she plays with seems to rotate around); she also plays by herself a good deal.

My question has really two parts: First, how should we respond to these comments and observations about some kids not playing with her? I don’t want to dwell on how she’s being left out if it’s not a big deal for her, but it clearly bothers her some.

Second: Help me keep this in perspective. I know I’m overreacting, but honestly, it breaks my heart that she didn’t get to play “super rings” when she wanted to – it probably upset me more than her. I know this sort of stuff is normal and will happen throughout life and I know my sleep-deprived, hormonal, breastfeeding brain (she’s having a rough transition to a big girl bed plus she has an 8 month brother who doesn’t eat during the day very well and is up three times at night…but that is all for another post, or two) is fueling my own emotional response. I’m trying not to go all mama bear, but I want her to have friends and be happy – she’s really delightful – who WOULDN’T want to play with her??

Please help me know HOW and WHEN to help her navigate these social interactions. If I’m this much of a wreck over preschool drama there’s no way I’m going to be able to handle middle school and high school drama! She’s my oldest, so I haven’t had to deal with any “big kid” issues yet – this all makes toddler tantrums seem more attractive.

Go talk to the teachers

First of all, talk to her teachers. I can almost guarantee that they’ll give you an entirely different perspective on her peer interactions, possibly even to the point of complete bafflement because she is indeed playing “super rings” whenever she wants to, with whatever peer she wants to. Or at least that her definition of someone “not playing with her” isn’t quite the stinging Queen Bee Mean Girl rebuke you’re imagining.

I’m not saying your daughter is lying to you, but…well, three years olds are VERY unreliable narrators, you know? The lines between what’s real and what’s imaginary are very blurred at this age, and they experiment with those lines A LOT, especially when describing past events.

Honestly, every single one of my children has come from preschool/kindergarten/elementary school with similar tales of playground drama and exclusion, right down to the “Kid Y said I couldn’t play with them.” (Another popular was that a particular classmate consistently did terrible, awful things to them and broke all the rules and got sent to the principal’s office almost daily.)

But when I talked to their teachers…well, I always got the rest of the story. Which could range from “He asked Kid Y to play on the slides but Kid Y wanted to play on the swings” to “Kid Y was out sick all week, so obviously they couldn’t play together,” to “I have no idea what he’s even talking about? I just saw them playing together yesterday.”

(And the class troublemaker they talked about MAYBE got sent to the principal’s office one time, but most certainly didn’t push anyone down a full flight of stairs before yelling five whole bad words and setting the school on fire. Although I didn’t really need the teacher’s input to figure that one out.)

My second-grader came home from school recently and declared that he had “no friends” and “nobody likes me.” A quick email to his teacher once again revealed this to be utterly over-the-top nonsense. (“EVERYBODY likes Ike,” she told me.)

After some prompting, it turned out he’d looked through his past yearbooks and noticed all the peers who either aren’t in his class this year or moved away to different schools. What he really meant to say was, “you know, I really miss all my old friends.” But because he’s a seven year old with an over-the-top penchant for sweeping declarative sentences, he didn’t.

But let’s say that okay, the group dynamics at her daycare mean that sometimes, maybe, she and Kid Y really don’t play together all that much anymore, or that there are days when she does play alone. There’s nothing wrong with that! Playing alone (especially for highly imaginative or slightly introverted children) does NOT mean she’s some social pariah with no friends. It just means she enjoys her own company sometimes over the constant negotiating/compromise that’s required when kids this age play together. Parallel play is still totally okay and fine and normal for two and three year olds, and this is where it can get tricky to nail down what they consider “playing together” vs. “not playing together.”

My oldest son (who is on the Spectrum so social stuff is always something I’m 30 seconds away from going full Mama Bear over) consistently keeps his circle of friends small — he’ll name two, maybe three kids who he talks to/eats lunch with/etc. When he was younger, I got probably the best advice ever from his school psychologist: We AS PARENTS want our kids to be loved and popular and be friends with absolutely everybody… even though we AS ADULT HUMANS probably have a small circle of close friends (or even just one or two). We probably know a lot more people than that, but would find it exhausting to get roped into regular coffee meetups or social situations with them. So why can’t we just let our kids have a couple good friends and not care about all the other kids at all the other lunch tables?

(Answer: Because we’re projecting our own school experiences and social baggage on them and have a difficult time accepting that we cannot guarantee our children a completely heartbreak-free life.)

So. Talk to her teachers and find out what’s really happening with her peer dynamics. Then the next time she reports some kind of exclusion, take it with a grain of salt. Redirect and ask her what she did instead, and praise her for it, even if it’s “I played by myself.” It’s good to be your own friend sometimes. Sounds like you and Kid Z had fun anyway. I bet you can play super rings tomorrow.

If you’re not satisfied with what her teachers say (like you get the sense they aren’t paying close attention), remind your daughter that she can speak up and advocate for herself. Talk to a teacher. Kid Y isn’t the boss of super rings. You don’t want to encourage tattling over every little thing, but if mean-spirited exclusion IS happening, there’s nothing wrong with reminding her to talk to an adult about what’s happening and how she’s feeling.

(Note that I always tell my kids this, and then they never do, because again: Shit ain’t going down on the playground the way they like to describe it later.)

Watch your own postpartum emotions

And try to get some sleep, and watch your anxiety levels in general. Postpartum mood disorders (not just depression! anxiety is also a thing) can absolutely surface at eight months postpartum.  If you know logically that you’re overreacting to something but are unable to temper that reaction (and said reaction is mentally painful or intrusive), that might be a sign that something deeper is going on. Obviously I’m not a doctor, just can’t ever hammer home that postpartum anxiety is very very common and can happen ANYTIME within the first 12 months enough.