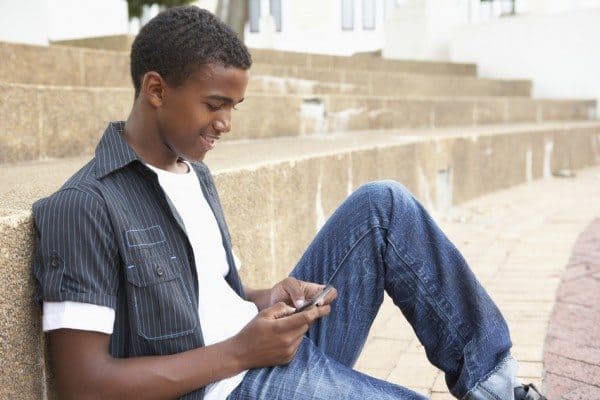 When A Cell Phone Is Something More

If there’s one thing my teenage daughter will quickly confirm about me, it’s that I am not swayed by “but all my friends have…” or “all my friends get to…” (much to her chagrin). To hear her tell it, she is the only kid in her circle who doesn’t have a smart phone, doesn’t have her own personal laptop, doesn’t have a television in her room, still has a bedtime, etc. I am either old-fashioned or an outright monster, depending on the day. And I am perfectly okay with that. In fact, she should probably be grateful that her father and I are divorced, both because he provided just about every piece of tech she and her brother own without consulting me, and also because this is how she ended up with a cell phone.

My kids were just 8 and 10 the first time they vacationed with their dad after we’d moved away. Although I’d always been nervous to have them away from me (not due to anything their dad did or didn’t do, just because I’m a worrier), somehow the 1,000 mile distance made it even harder. So we made the decision to get the kids their own phone, and any time they went on visitation I’d give it to my daughter (she’s the oldest) and say the same three things: Call whenever you want to; don’t lose it; and let your brother use it whenever he wants to, too. For a couple of years, that was it. But then my daughter got involved in various school activities and trips, and more and more I was taking the phone out and letting her take it with her to call us when she needed a ride, and by the time she was 13, it was her constant companion. Now that she’s 15, she pays half the “unlimited texting” fee each month, as texting is her second—but preferred—language. Also, did you know we’re the only horrible parents who won’t pony up for a data plan? She has friends with iPhones and such, and it is so unfair. (Pro tip: When she insists on asking why her friends get to have those things and she doesn’t, I like to tell her it’s because her friends’ parents love them more than we love her.)

Last week my daughter came to us and asked if she could please get a new phone—her current one was two years old and having some problems, probably due to her constant texting. We checked our plan and she was eligible for an upgrade, so together we decided on which (free) phone she would get, negotiating the upgrade fee (she’s paying it), and then, to my surprise, she suggested we get her brother a phone, too. “Sometimes I want to text him and he doesn’t have one,” she said.

My knee-jerk reaction was not even “No” so much as it was “Hell, no.” He’s only 13 (the same age his sister was when her cell phone became her favorite appendage)! We homeschool and he’s rarely someplace without me! He loses things all the time! Plus, you know, he’s just not social the way she is, so it would be silly.

These were all of the thoughts I had before allowing myself to acknowledge the real underlying thought, which was more along the lines of: He’s autistic, and that brings precious few advantages to our lives, but one of them is that he has no need to “keep up” with other teens. And at thirteen-and-a-half, socio-emotionally he’s still like a much younger child. Plus, he’s never asked for a phone.

I told my daughter I’d think about it, and later that night I brought it up to my husband. His initial reaction was pretty much the same as mine. It’s certainly not something he needs. Then again, I doubt any teen needs a phone. I began to realize this was one of those crossroads; while I am more than comfortable letting my son proceed at his own pace through life—which, for him, means the constant whiplash of being extremely advanced in some areas while far behind the developmental curve in others—there’s no denying that sometimes he requires a little nudge towards greater independence or age-appropriate socialization. Just recently he started calling a friend on a regular basis (mostly they talk about Pokemon, but hey, he’s chatting on the phone with a friend), and last week I dropped him off at a new friend’s house for a few hours. Yes, we have a home phone he can use to call his friends. Yes, the house where I dropped him had phones. But… he’s nearly in high school. Might this be one of those nudge-worthy situations?

We asked him what he thought about getting his own phone. “Really?” he asked, eyes growing round. Then: “I… don’t know. I’d probably lose it.” I smiled and squelched a giggle (that had been one of my first thoughts, too) and assured him that he could handle it. Remember when he first got glasses and had to learn to always put them down in the same place? Remember when he first started wearing a watch and he used to forget to put it on in the morning, but now it’s part of the routine? He listened and nodded, and eventually grinned. “I could text my friends! And my dad! And my sister!” His excitement grew. The decision was made.

Make no mistake, this is an unnecessary luxury (if you can call a $10/month addition to our cell plan a luxury…) and we know it. But it’s also a piece of typical-teen-dom we’re fortunate enough to be in a position to provide, and I’m excited to see how it unfolds. Will he become a texter, like his sister? Will he mostly use it to call his Pokemon pal to discuss monster stats? Will he remember to charge it while he’s away with his dad so it’s not dead when I want to check in?

And, uh, just to clarify… it’s probably not okay for me to duct tape the phone to him, huh…? Because there’s already a pool going on how long it’ll be before he loses it.