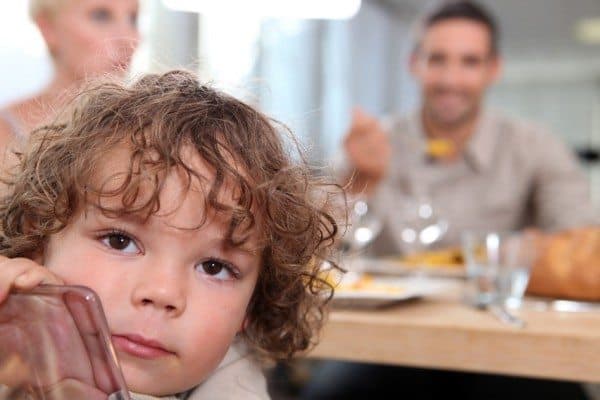 You’ve mentioned going from a less than Ellyn Satter dining plan to following her book pretty closely with dinners at home. I’ve read the “How to Get Your Kid to Eat: But Not Too Much”. My house is still a dang mess when it comes to eating! I was wondering if you would mind doing a post about how the transition went. How much belly-aching, complaining, not eating was there?

Specifically, I have a 5 year-old, a 3 year-old, and an infant. Oh, and a husband who is rarely home for dinner, won’t eat early enough to eat with the kids, and well, you get the picture. The 5 year-old is soooooo picky. Seriously. He has some mild sensory issues, that I think contribute. Namely, a very sensitive smell sense. He’s not texture averse, just smell sensitive. The 3 year-old is more adventurous, but not exactly adventurous. She is improving though. The issues we have stem from my path of least resistance approach in life, and well, the aforementioned infant spent nearly 5 months in the NICU and the babysitters are not cooks. So, there were several months of cycling the stock dinner options that were easy. Lots of chicken, meatballs, fish sticks, and a little spaghetti.

So, now that I want to try to clean things up a bit, I’m facing a possible revolt. I’m implementing 2 dinners a week at the big dining room table, with full focus and attention, myself and 3 kids. I’m trying to find dinners that are a slide from what they are used to, or somewhat adaptable (Sloppy Joes, I don’t care if you only eat the bun!). Any suggestions? Should I really go completely cold turkey? That’s really hard with Dad’s unpredictable schedule and habit of traveling and being accustomed to deciding what he wants no more than 5 hours before eating…..and eating later than the kids anyway. Sigh. I can only fix the kids here, not the DH!

Signed,
Short order non-cook who really wants to be more!

I have to admit: The Satter method works best when you can get the whole family on board, and can commit to “real” family dinners as many nights a week as possible. Even more so in the “beginning,” when presenting a united, consistent front for the kids shows them that this is the new reality: You will eat what Mom and Dad eat. The end.

That said, that’s simply not doable for a lot of families. Obviously, it would be GREAT if you could get your husband to commit to like, one solid week of eating dinner with the kids to help you out, but I don’t think it’s a lost cause if it’s just going to be you most of the time. I would suggest you re-think the “two serious meals a week” strategy, at least in the beginning when you’re hoping for some kind of breakthrough. While I fully support the expectation of table manners (and there is something nice about sitting at a table together) is it possible that the “full focus and attention at the big formal table” approach is stressing everybody out a bit (yourself included)? I know there is nothing — NOTHING — that wears my patience down than dinner time whiiiiiiining over foooood and I don’t liiiiiiike this and I’m going to hang upside down from my chaaaaaaiiiirr. The change of scenery/expectations might also be signaling to the kids that “THIS IS GOING TO BE FOOD I DON’T LIKE” before they even see what you’ve made.

(Or not! I don’t know. We usually eat dinner in our dining room but the kids eat at the kitchen counter for breakfast and lunch, and I did plenty of kids-only meals when we were first Satterizing Noah and Jason had to work late. Of course, Noah wouldn’t even eat kid-friendly stuff like fish sticks or meatballs at the time, so I considered getting him to eat that stuff a victory!)

So here’s what I’d suggest: Go cold turkey, but loosen up a little bit at the same time. Give them new things in the old scenery. Put the plates down and leave the room if you have to; if that helps you avoid the cajoling and begging and “just one bite” bargaining that is decidedly very un-Satter. OR: Could you possibly commit eating with the kids every night, dining room or otherwise, but simply try to make meals that your husband can simply reheat when he gets home? Maybe stuff in a Crock Pot that can basically be served whenever? That way you get to model the good manners/eating habits for the kids without THEN simply becoming a short-order cook for your husband a few hours later.

(Think chilis or stews with lots of veggies that you can serve over kid-friendly spaghetti, egg noodles or rice. Mild Indian-style curries are also a great way to make an adult-friendly meat/vegetable dish in a single pot or Crock Pot…let it simmer all day if you want, then serve it to the kids over rice and give them some bread. [Trader Joe’s has great frozen Indian breads that are super-convenient.] The bread and rice usually keep them from flipping out over the unfamiliar stuff in the curry. That’s basically how I got Noah to tolerate rice with “sauce” on it. Eventually, he would eat the actual contents of the curry — chickpeas, lentils, chicken, spinach, etc. Baby steps, though.)

Yes, there WILL be a revolt. An uprising. Whining out the wazoo. I think we had some full-on sobbing. Which is why you do kind of have to be SUPER CONSISTENT, EVERY NIGHT about it for a week or two. They…they need to get hungry. That sounds so mean but it’s true. This is like CIO for eating. They will try to wait you out, figuring that eventually you’ll get sick of making meals that go untouched (which: yes, grrrrr) and cave and they’ll get some macaroni and cheese.

I think Noah skipped dinner for about three days straight. He ate plenty at breakfast and lunch and I continued to offer him healthy snacks, but I did make sure he wasn’t snacking too close to dinner and getting lots of exercise and activity during the day. He wasn’t starving or getting malnourished by any means, but he WAS hungry at dinner. And eventually (day four), he lost the battle of wills, gave up and scarfed down a plate of fish sticks and peas. Hardly a culinary masterpiece or anything, but it was the first time in YEARS I’d gotten him to eat any kind of protein that wasn’t peanut butter. And the peas! GREEN THINGS. ZOMG.

Once Noah accepted fish sticks, I immediately switched up the brand so he wouldn’t get stuck on a particular color/shape/flavor. Then I learned how to make my own — frozen salmon or cod fillets, tossed in a food processor with whatever vegetable purees I had for the baby (squash, spinach, yams, etc.), whole wheat bread crumbs and some seasonings (onion powder, garlic powder, thyme, etc.). Roll in balls or sticks and bread them. I blend the breading up with some almonds, for extra crunch/texture and protein. (Thanks to one of those Sneaky Chef books for that one.) Freeze, bake, just like any other boxed nugget. These became my guiltless go-to when I DID need to cave and make a kid-only meal. (And yes, my kids still get macaroni and cheese sometimes. Sometimes from a box, sometimes homemade. I add pureed beans or cauliflower to the white sauce kind and butternut squash to the yellow. And a must-eat side of non-pureed green vegetable or grilled chicken. Meh.)

Instead of boxed (and processed and expensive) frozen things like pizza or waffles, we also started making our own versions of those, too. This helps with the kids getting visually “stuck” on how a certain food is supposed to look, AND has the added bonus of getting them to be much more flexible when eating out, or at other people’s homes: We no longer have tantrums when a restaurant’s mac-and-cheese turns out to be penne or rotini pasta, for example. Plus, it’s really so much cheaper to keep organic INGREDIENTS in the house, rather than splurging on the organic convenience versions that basically amount to one meal.

Pizza can be a crazy easy meal to make — buy store-made dough (if you can find some without a ton of crap in it) and keep it in the freezer, or make a big batch of your own and freeze that. (Just Google for “easy pizza dough recipe.” You can’t really go wrong. Whole wheat crusts are pretty yummy too.) Sauce is canned whole tomatoes in a blender with some olive oil and garlic. Maybe some dried basil, if you’re fancy. Our pizza stone broke so we just use a stupid cookie sheet with semolina flour and bake at 500 degrees. Make two pizzas — one basic that you know they’ll like, and one for you and your husband with perhaps more “challenging” toppings. (White pizza with spinach! Artichokes and pesto!) Give the kids a slice of both. There. You’ve done your division of responsibility for the night AND made something that will please everyone — easily reheated for hubby, and it’s healthier and cheaper than most of the frozen or delivery options.

Anyway, point is, you’re on the right track. You don’t have to immediately start giving them nothing but brussels sprouts and steak, or anything. Adapting or slightly tweaking their “acceptable” foods can make the process a little less painful. Trust me, we do a LOT of pizza, taco nights, and Things That Can Be Put On Noodles Or Rice around here. But I’ve also realized that hey, if we’re eating chicken with ratatouille on top of it, there is no reason why I can’t put chicken with ratatouille in front of my children. Noah might only eat the chicken. Ezra might only eat the zucchini. Ike might eat absolutely none of it. No big deal; they’ll all survive until morning.

Because on the other hand, Noah might agree to try the ratatouille. He might decide that while the zucchini and eggplant aren’t his thing, the tiny chopped bits grilled red peppers are yummy. And just like that…ta-da! Grilled red peppers are suddenly on the list of acceptable foods. (This actually happened, by the way. I’ve been grilling a LOT of red peppers ever since, because YAAAAY I WON OR SOMETHING.)