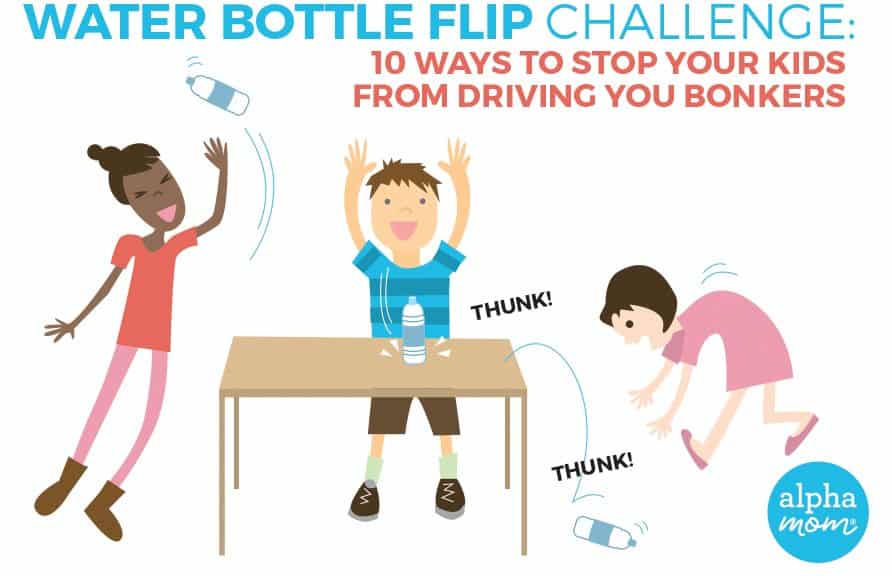 If you are the parent of a child over the age of 8, you’ve no doubt heard this sound 24/7 for the past few weeks or months:

If you haven’t, go away because I’m insanely jealous of you and your ability to relax for more than two minutes at a time. I no longer remember the days of not hearing the constant drum beat of water bottles landing, followed by wild cheers because the kids are also making trick shot videos of it. Tell me, what’s it like to not flinch every ten seconds?

For those of you blissfully unaware of what I’m even talking about, here’s the viral video that set off this terrible tween trend:

MUCH more entertaining if it’s not happening in your own house all day long. THUNK.

If your kids, like mine, are obsessed with the Water Bottle Flip Challenge, here are a few ways we can get them to stop before we lose more of our minds with each flippin’ flip:

1. Refuse to buy beverages in plastic bottles.
One flip of a glass bottle of Perrier may be the cure. Just keep a broom and dustpan handy.

3. Throw a party and invite your mom friends to flip water bottles.
Because nothing cures a trend more than having it co-opted by adults.

4. Wake your child up every morning by flipping a water bottle next to their ear.
Bonus points if you miss the ear and hit the nose instead.

5. Start a Change.org petition to enact legislation to ban the recreational use of plastic water bottles.
It should happen anyway. You’re just leading the charge. It doesn’t matter why.

6. Create a behavior chart.
Tie your child’s privileges earned to how effective your child is at NOT flipping the plastic bottle. Identify the privilege/reward they want. If they can go XX days without flipping a bottle in the house, then they earn their goal. This technique is often used in correctional facilities.

7. Create an annoying song  called “Bottles are Not for Flipping.”
And sing it in the car whenever your kids and their friends are in it. If this isn’t effective, add a dance move called the Flip Twerk. Still not effective? RAP IT ON THE SCHOOL LOUDSPEAKER.

8. Enforce consequences.
Every time they flip the bottle after you have already said no, take the bottle away. The important thing is to remain calm and don’t lose control like this: OMG STOP FLIPPING THAT STUPID BOTTLE HOW MANY TIMES DO I HAVE TO TELL YOU I AM LOSING MY MIND while smashing the bottle against your forehead. Ask me how I know.

9. Send your kid outside to flip the bottle
Note: “Outside” could be Grandma’s house in another state.

10. If none of that works, MOVE.
That’s right, move to San Francisco or Concord, Massachusetts where water bottle sales are banned. Trust me, it’s worth the hassle of finding a new job, new friends and a more expensive house to not hear THUNK every two minutes.

Of course, then they’d probably find something else to flip. THUNK.

Illustration above by Brenda Ponnay