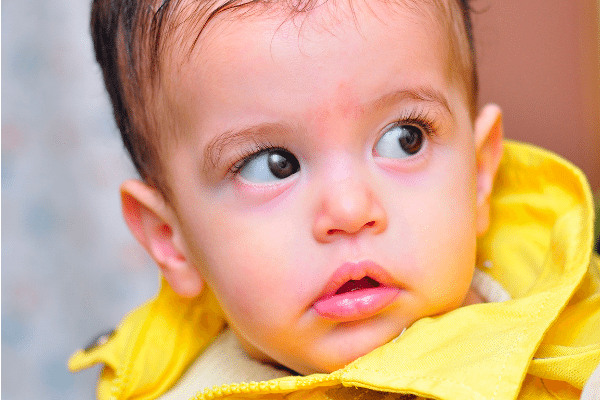 First, thank you for your awesome blog and excellent advice. I discovered your blog while nursing my son as an infant, and definitely survived the frequent nighttime feeding stage by reading the archives! I’ve also made good use of your sound, down-to-earth advice.

Some background: I have a darling eighteen month-old-son who is the light and joy of my life. He is our first and only child right now. I am a school-based occupational therapist, and have loved watching my little guy grow both personally and from a professional perspective. I’ve tried hard not to be one of those people obsessed with each milestone or overly worried about development as I know every child has their own pace and that the range of typical development is very wide.

Here’s my situation. My son attends a daycare center while I am at work for 3 days last school year, 4 days this year and is in the toddler 2 room, for kids 15 months to 2 years old. He moved up to this room in May, but has only been going to school one or two days a week over the summer while I’m off for the summer. His teacher mentioned that he doesn’t respond when she calls his name, and asked if we notice that at home. I was honest and said that I was concerned about that earlier, but once he had tubes placed in his ears for chronic infections at 14 months I was no longer concerned. She also mentioned that he tends to wander on his own frequently rather than playing with the other kids, but that sometimes the younger kids do that (he is the youngest boy in the class of eight kids). She had recently completed an assessment they do every three months as part of the program. I’m waiting to get the full report from the center. His previous assessment done before he transitioned from the infant room had no concerns.

I’m trying to balance my personal concern for my son with what I know and see professionally with the kids I work with, all of whom have some form of developmental delay. I know that not answering to his name can be a warning sign of autism. At home he will mostly respond if I call him, but he will also sometimes ignore me, especially if he’s really into something he’s doing. I find him very social and outgoing with other kids and people- following older kids at the playground or beach, trying to get the attention of others at the supermarket, etc. He is affectionate, points, makes eye contact, and I have no concerns about his joint attention. He has about 20 or so words, gets his needs across, and likes imitating sounds and hand play. I have questioned his overall hearing at times, but not as much after the tubes were placed. I’m planning to bring the teacher’s concerns up at his eighteen month appointment, but should I be making requests for a further evaluation? I feel like if someone came in to evaluate him they would think I just wasted their time, given he is doing all of those other things. Do I have too much info/anxiety because of my profession and need a smackdown? I just want to do what’s right for my baby.

Thank you so much for any insight,
OT Mom

That said, there’s not really anything jumping out at me here as a big-ass warning sign, especially given all the age-appropriate social/communication milestones your son seems to be hitting just fine. An 18-month-old ignoring an adult? Who is probably about to make a request/demand that he would also probably prefer to ignore? In a noisy daycare room with lots of other things competing for his attention and focus? Nah, that doesn’t really elicit much concern from me, nor does the fact that he prefers independent (or at this age, “parallel”) play.

(He’s an only child at home, so that’s just likely how he plays, but just the fact that he’s playing somewhat near or in the sphere of other kids means he’s still getting lots of good social stuff from his daycare experience. Same with in-home playdates at this age where the toddlers essentially show up to ignore each other. At least they aren’t fighting? Or biting or hitting? THIS PLAYDATE IS A HUGE SUCCESS!!)

If he was missing other key developmental milestones (no words yet, no hand gestures or imitating, sensory concerns like toe walking or unusual reactions to physical stimuli), then yes. I would suggest that you get him evaluated. I would still (and I imagine this is part of the post-tubes procedure anyways) suggest that you stay on top of hearing screenings to confirm that the tubes are doing their job and that he doesn’t have any permanent hearing loss from the earlier infections. It’s possible he’s still re-learning how to parse the sounds he hears, so a teacher calling his name in a noisy classroom simply isn’t getting prioritized by his brain because he’s focuses on a noisy toy right next to him.

I had tubes put in my ears when I was 5 years old, and while I immediately noticed things like the crazy high volume on the TV (which I could barely hear before the tubes), it took me longer to learn how to process all the competing sounds that I only now hear for the first time. My mom calling me for dinner while I hit the piano keys, while our next-door neighbor mowed his yard and our dog barked at the lawnmower and suddenly my mom was YELLING at me from the doorway to come to dinner, with a worried look on her face like maybe I still couldn’t hear her. I could hear! I just still needed to learn how to LISTEN.

Again! Not an anecdotal expert on tubes in the ears either! Just throwing out a possibility to keep you calm until you bring up your (and his teacher’s) concerns to your doctor. Which you should totally do. If your doctor says “wait and see, let’s do another hearing screen just to be safe,” I’d personally feel pretty satisfied with that.

(More useless anecdotes: We got the “wait and see, let’s give him three more months or so” answer at 18 months when our oldest son wasn’t talking or pointing yet. Three months later, he still wasn’t and we were referred to Early Invention. I still think the “wait and see” period was the appropriate response at that age, and we didn’t “lose” a damn bit of progress because of it.)

BUT. LOOK. IF YOU ARE WORRIED IT’S OKAY TO BE WORRIED AND PUSH FOR MORE. No Early Intervention caseworker  is ever going to be mad or annoyed because they tested your son had GOOD NEWS to give you as a result. (I mean, if they ARE mad or annoyed because they get to tell a parent that their child is developing typically, they should probably look for a different job). I feel like your situation is common among your profession: I’ve gotten a lot of letters from other OTs or SPs or special educators who are afraid their lens at work is clouded when it comes to their own child. I’ve also gotten letters from relatives, partners and friends who are upset because there’s a child with obvious needs but said child’s parent is a “child development expert” and thus feels qualified to deny that there’s a problem.

It never hurts to bring up and voice your concerns, even if the universal response is a soothing affirmation that you can let go of those concerns. It also never hurts to get as much information as you can about your child, be it from a daycare evaluation to something more formal from EI. Personally, I think your kiddo sounds just fine. Personally, I would still bring my concerns up to anyone whose job it is to listen to my concerns. You brought your concerns to me, so bravo! Step one. 18-month appointment is step two. You got this!