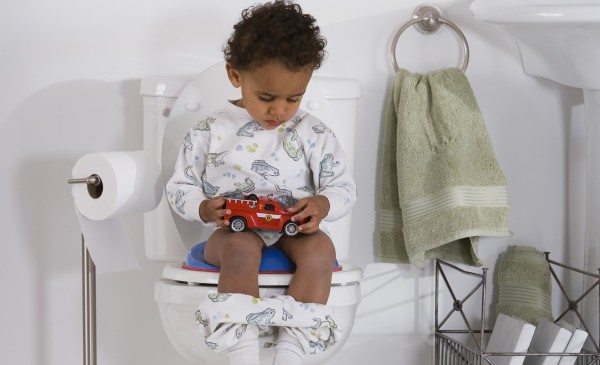 An avid follower, I know you’ve written tons on potty training. And while my 3 year old son has made it so easy for us, I read your potty training columns anyway. You know, just in case we hit a stumbling block. Well, here’s a new one for me and I’m hoping you can provide some guidance.

Until last week, my son had been doing great at sleeping through the night without wetting his pull-up or getting up to let us know he needs to go in the middle of the night (rarely and there’s a gate at his door so he needs help in and out of his room to get to the bathroom). Yayyyyyyyy, tons of praise and recognition given.

So now the stumper. For the last week, not 5-10 minutes after I tuck him in (and after 2 trips to the potty right before bed), he calls to us that he peed in his diaper. Not that he has to go potty, that he’s wet. He goes potty before bath and about 15 minutes later as the last thing before tuck-in. How, I ask you, HOW is it physiologically possible that he STILL has anything left in his bladder to do this? And I verify that he does actually go a fair amount in the toilet both times. And we don’t give liquids after dinner, yada yada, covering all the major do’s and don’ts.

And how do we get over this hurdle without damaging his precious psyche (and mine, which leads me to the answer to your next question, I’m guessing).

What major changes have occurred lately? He is changing to a new school and his last day at the old school was about a week ago a few days before this started. Though he hasn’t expressed anything but excitement about meeting new friends, I know he is/will be sad at not seeing his old friends. AND we have a 2 month old, so being a big brother is new to him. Again, not a significant change in behavior but an acceptable amount of jealousy and demands for extra attention, hugs, etc which I do all I can go meet or exceed.

So with a new baby and the accompanying sleep deprivation and exponential increase in laundry, how can I help my son overcome this potty training regression? At the though of losing more sleep or getting buried further under the laundry mountain, the frayed thread my sanity is hanging by starts to give out. Thanks!

I can already guarantee that my advice will not be what you were hoping for, but hey, the Smackdown is back from its December hiatus and feels like coming back with a bang of complete and utter apathy.

Here’s what you do: NOTHING.

Don’t stress over this. This is a blip. This is will work itself out in time, if it hasn’t already in the nine days since you wrote this email. This is a three year old doing what three year olds do best: Angling for attention in the weirdest ways imaginable.

“But he gets plenty of attention! I am an absolute fount of wonderful, positive attention!” I KNOW, RIGHT? I completely believe you. Doesn’t matter.

I’d call this less of a true “regression” and more of a new-sibling-related, attention-seeking quirk. Because unless there’s something physically going on with his urinary tract (which if so: you would likely notice the same pattern during the day that he pees, then immediately needs to pee again because his bladder isn’t emptying for some reason, plz take him to the doctor), this habit strikes me as something he’s figured out how to do deliberately. Simply because he likes that you come back into his room 5/10 minutes after tuck-in.

And most toddlers/preschoolers play this bedtime game. For some, it’s the endless requests for a glass of water, one more story, or that you check the closet for monsters. Or bring them some toy or fix their covers or correct an uncomfortable pajama-tag situation. Your son has opted to go with a diaper change. Congratulations! You’ve won a great story to tell later while shaking your head in baffled amusement.

You’re changing a lot of diapers already. He notices. And his pride in his potty training is maaaaybe wavering a little, because maaaaaaybe there was one or two times when he asked you for something and got the “NOT NOW, DEALING WITH A NEWBORN DIAPER BLOWOUT” response. Or not! It’s not even worth trying to wiggle through the reasoning here, because he’s THREE YEARS OLD. That’s enough said, right there.

(Although…if that gate isn’t 100% necessary, maybe get rid of it? Or replace it with something he can operate himself? But that’s your call — every kid is different when it comes to when they’re ready to say goodbye to baby/toddler containment and have full-house-wandering freedom. We typically granted it around this stage — once they were capable of staying dry at night or could wake up and use the potty independently.)

When the inevitable “I’M WET!” call comes, answer it. Silently. Mechanically. Make him take his own pull-up off and take it to the trash. No chatting/talking. No rebukes, encouragement, whatever. He’s got your attention…but only sorta kinda.

He’ll tire of this game, eventually. Meeting all those new friends will probably help — a new big-kid peer group around this age typically makes potty-training and cool underwear more of a Thing, a source of pride, and he’ll prefer not to seek your attention in this particular, babyish way.

(One other idea: Downgrade him from pull-ups to a For-Real Old-School Baby Diaper until this behavior stops. Not a shaming tactic — and I don’t recommend this for any child who is physically incapable of staying dry overnight yet — but if you suspect a toddler is deliberately regressing, going back to Baby Diapers REALLY makes the game seem less fun for them.)

I have three children, and my first two BOTH reacted to the new sibling with some sort of potty-related regression. It wasn’t always immediate — in fact I think they both waited a couple months, as if it took them awhile to realize the baby wasn’t going anywhere and could be a noisy, annoying attention-hog. It was always temporary, however, and the only way through it was through. Lots of positive attention and a jaw-clenching, stoic lack of attention (positive OR negative) whenever they had an “accident.” (THAT WERE SO ON PURPOSE.)

And my youngest doesn’t have a younger sibling. But he’s three. And competing with older siblings for attention. So…yeah. I feel you. It’s just kind of normal for kids to act kinda weird at this age.