Twitter Facebook Pin It Email Article
Prev Brides vs. Babies, Round Two Next Does Two Under Two Shortchange the One? 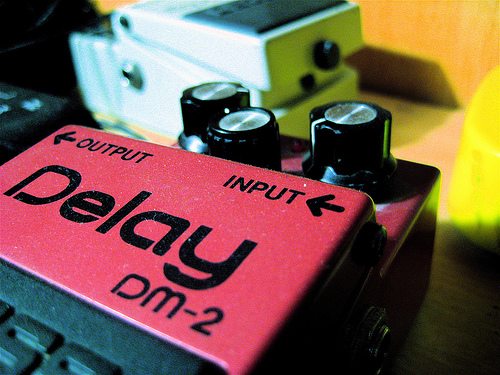 I wrote to you some months ago suspecting my daughter has a speech delay. Well, I had her tested and, yeah. She’s 17 months old as of today and she has the speech abilities of a 4 month old, based on the initial assessment. They’re going to do a more in depth evaluation, and the coordinator cautioned, “Now, that number might go up to, say, 6 months. But don’t expect it to magically creep up to 12 months or anything.” But she’s laid out some wonderful programs that are available to help her, and I’m going to tackle the problem head on and whip its ass.

I’m devastated. I cried for twenty minutes after the coordinator left our house. This is my baby girl, my heart, my soul, my everything. The problem I’m having is my boyfriend. He went on to tell me that “See? She’s not delayed! That number will go up and you’ll see she’s just fine. Why, my son [previous marriage] didn’t talk at all until he was two!” My first instinct is to scream at the top of my lungs “SHE IS NOT FINE, DAMMIT! The next person who tells me again that she’s fine gets my foot across their mouth! The assessor said she’s not fine, and quit comparing her to your kids! If your son couldn’t talk until he was two, why didn’t you do something?!” But, I know he’s just trying to make me feel better and in his own way telling me it’ll be alright, so I just clamp my maw shut. He just doesn’t seem to think there’s anything wrong with her, and it’s driving me crazy. He has said IF she’s delayed (if?! Hello! She IS delayed, gahhh!) then he’s on board with speech therapy, but that he still doesn’t think there’s a thing wrong with her. His family also shares his views, and because they’re both nurses, brush me off, all superior-like.

How do I convince the three of them that once and for freaking all SHE. IS. NOT. FINE? I really, really want to smack the next person who tells me that but alas, it’s not polite and might even be illegal. I feel like it’s an insult to me, my child, and the wonderful people helping us when they tell me that.
Thanks, and BTW – I just want to say you’ve big a BIIIIG help and a BIIIIG inspiration to me.

I still get it. The “he’s FINE. there’s NOTHING WRONG WITH HIM.” thing. Um. For real? You really wanna argue with me and my binder full of evaluations and second (and third, and fourth) opinions about those evaluations? You really think the public school system just hands out free special education preschool to kids who are just “fine”?

These developmental-delay deniers seem to fall into a couple categories, complete with overlap:

1) THE DEFENSIVE. By stating that yes, your child has such-and-such of a delay, you often draw the delays of other children into sharper focus. Your boyfriend’s son, for example. I cannot tell you how many times I heard the “my kid didn’t talk until he was four and couldn’t handle preschool until he was five and he’s just fine now you’re pushing him too hard and expecting too much blah blah blah.” They may even think they’re encouraging you, but the defensiveness under the surface is usually pretty transparent. Like you said, if your child didn’t talk until he was two, why didn’t you DO SOMETHING? And that’s a question a lot of parents simply cannot bring themselves to answer. You are calling their decisions into question, the idea that maybe the way things were done 20 or 30 years ago was just flat-out wrong, the idea that they let their child down. So instead they blame today’s schools, society’s expectations, neurotic parents. “If you just turn off the TV and read her more books, SHE’LL BE FINE.”

DEALING TACTIC: Smile and say that you are certainly optimistic that she will be fine, tell them how happy it makes you to hear their success story. If they continue to press the issue, say you have decided to take the “better safe than sorry” route and take advantage of all the wonderful programs available to her these days. Realize that you may never change their minds, but can only do what you think is best for your child.

2) THE UNINFORMED. Your boyfriend is putting too much emphasis on VERBAL communication. Four-month-olds don’t talk. Neither do most 12-month-olds. Some 17-month-olds do, while others don’t. But children of all of those ages still COMMUNICATE, and your daughter is not COMMUNICATING at an age-appropriate level, or anything close to it. That’s what her assessment measured — more than words. It’s eye contact, coos, certain consonant sounds, mimicry, facial expressions, gestures. For some reason, people really seem to think that communication is a single leap from non-verbal to verbal. A baby goes from completely silent to “dada” and “mama” and “juice,” when really it’s a process (with measurable milestones) that starts from birth.

DEALING TACTIC: Well, you fight ignorance with knowledge. If your boyfriend isn’t too deep-rooted in his denial, encourage him to do some reading. Read stuff out loud to him, if you have to. Fill out a communication milestone checklist (birth to age two) and show him that hey, it’s not just because she’s not saying “doggy.” Make sure he’s present at any and all evaluations going forward and request that nothing be sugarcoated in his presence.

3) THE OVER-INFORMED. Sometimes it seems like folks who work in the medical community are the biggest deniers of all. Nurses and doctors have seen worse, much worse. They’ve probably diagnosed much worse. You’ve just unwittingly accused them of “missing something.” In a similar vein, I had a friend — a very smart, highly educated friend — who probably read more about autism than I have, because it frightened her and she needed constant reassurance that her child did not have it. You read enough checklists you either a) start seeing autism EVERYWHERE, or b) find enough things that *don’t* fit your child to cling to and start willfully ignoring everything else.

DEALING TACTIC: Similar to the Defensive folk, really. Smile and nod, and then do whatever the hell you think is right anyway. Do not engage in an argument, because really, it’s not their call. Until your boyfriend gets a little more with the program I’d say don’t even discuss the topic with anyone else who is just going to tell him what he wants to hear and undermine the heaping dose of reality that he really needs to hear.Realize that you may never change their minds, but can only do what you think is best for your child.

4) THE POLLYANNAS. “She’ll be fine! She’s just stubborn! You heard them! She’ll improve on her own! She doesn’t talk because she’s SO SMART! It’s always the smart kids! Einstein didn’t talk until he was blah blah blah.” Look, no one wants to hear that their baby is anything less than perfect. (I keep repeating a line from my interview with Quinn: “No baby is perfect, but we’re allowed to think most newborns are because we don’t know them yet.”) No one wants to admit that there’s something wrong or different or off about their baby. Hell, I still gulp and stammer when people ask me where Noah is going to school these days and get confused because how can a preschooler go to the public school? What was the name of that afternoon program? I’ve heard of that. Isn’t that a school for like, autism and Down Syndrome or something? I still get the wind knocked out of me with every new evaluation because sometimes I still secretly think this is all a big mistake and SOMEBODY, SOMEWHERE, is going to look at Noah and declare him “cured.”

DEALING TACTIC: I’ve probably repeated this phrase to every single person I know, at some point. “It can’t hurt, it might help.” Speech therapy is not strapping the kid to a chair, forcing them to look at flash cards and baby sign language for hours and hours, Clockwork-Orange style. It’s a nice lady who brings toys over and plays for awhile. It’s fun. It teaches you — the parents — a lot about the individual learning needs of your baby and how to get the most out of your time with them. It wasn’t fun to downplay Noah’s needs with a shrug of my shoulders to people and sound like I was saying “oh, what the hell, let’s try speech therapy for KICKS!” But it seemed to help preserve their boundless optimism and reconcile the fact that a smart, amazing, wonderful kid could STILL BE ALL THAT, even while in speech therapy. That’s not really such a bad thing, if you think about it.

While I’d skip worrying about your boyfriend’s family members, you do need to bring him back down to earth, a little bit. Again, he needs to BE THERE during your next assessment and hear this stuff in person. Make them repeat the “bad” news so he doesn’t gloss over it again. Make sure, when the eval results arrive in black and white (XX% DELAYED, COMMUNICATION SKILLS OF A X-MONTH-OLD, etc.), that he sits and reads them, and takes them in. There’s something extra-jarring about seeing it typed out in clinician-speak, even if you knew exactly what was coming.

It’s a tricky path to navigate — just because you admit that your child has a special need does not mean you suddenly cease to be their biggest cheerleader. In fact, it’s really the opposite. You learn that cheerleading isn’t enough, nor is simply believing in their potential. You have to advocate for them, fight for them, ditch any and all preconceived notions about parenting, and figure out that a cookie-cutter approach to raising kids (“what was true for child A does not mean it’s true/right/appropriate for child B”) is not in anybody’s best interest. Parenting a child with a delay or special needs requires a TREMENDOUSLY strong backbone and a TON of confidence in your decisions — ironic since having a special needs child often has the opposite effect, thanks to judgmental Other People and the mental ass-kicking and constant second-guessing we do to ourselves.

With time, some people do come around. We have family members who have finally stopped trying to point fingers at the wrong things (his diet! his teacher! he’s just so SMART!) and accept Noah’s diagnosis, and educate themselves on how they can better interact with him. Others needed to see the results of our hard-fought-for therapy and programs to finally “get” that things weren’t right before. I promise you I very rarely want to punch anyone in the neck, these days.

In the end, however, you do learn that their opinions don’t matter, even if they make you roll your eyes so hard you sprain something. What matters is that you never, ever let those dissenting opinions stand in the way of getting your daughter the help she needs. And while I don’t know you personally, I’m PRETTY SURE that’s not going happen here. Go get ’em, mama.