Twitter Facebook Pin It Email Article
Prev Drawing Apps Reviewed: The Yay to the Nay Next Out of the Car & Into the Crib

Toddler Summer Shoes Reviewed: The Yay to the Nay

I have a confession to make. For the past two summers, my two-year-old daughter has worn nothing but Crocs. As a somewhat fashion-conscious Manhattanite, I am fully aware that in many well-heeled circles, I am committing a kid-shoe crime. BUT. I will defend Crocs to the death, as the ultimate in toddler footwear.

However, I did welcome the opportunity to pit my time-tested favorite against a couple of the other popular toddler shoe trends for summer. Namely— the old-school revival of Salt Water Sandals and the brand-new-to-the-party Natives. 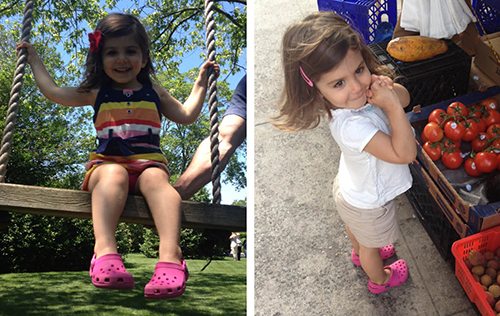 With two years of Crocs Classics ($24.99) under my belt (we bought the same exact shoe for this summer as she wore last summer, in a larger size), I can speak with complete confidence. They are easy to get on, waterproof, washable, protect little toes and very comfortable— at least that’s what it seems like from Mazzy’s lack of complaints. Plus, Mazzy can put them on and take them off by herself. I also happen to think they are adorable on a toddler (although I wouldn’t be caught dead in them as an adult) and the hot pink goes with most everything, including dresses. 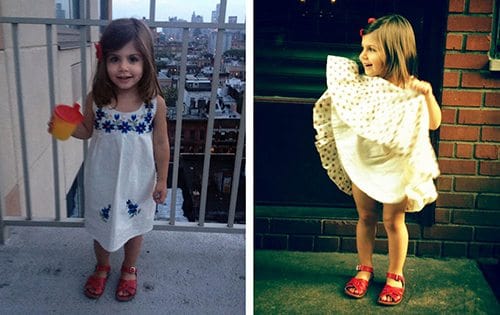 Honestly, I didn’t think Mazzy would like the Salt Water Sandals($31.95) because she wouldn’t be able to get them on and off herself (due to the buckle) and they don’t have nearly the amount of sole cushion as her Crocs.

I was wrong. The second they arrived, Mazzy’s face lit up like a lightbulb and she screamed excitedly, “They’re like Lousia’s!” That’s her best friend. She then demanded to put them on immediately, stomped around the apartment proudly and asked to put on a dress. When she woke up the next morning at 6am, she asked to put them back on again while still in her pajamas.

I’ve found they are pretty simple to take off and on and look a thousand times cuter with her clothes than Crocs. It’s even inspired me to dress Mazzy in her dresses more often, which all of a sudden she seems to love. Previously, she always insisted on shorts. Cherry red goes with almost everything (just like hot pink) and call me crazy, but I love how they look in photos.

I admit, we actually haven’t worn the Crocs except for trips to the water playgrounds since we got them. Even though, I hear that the reason they’re called Salt Waters is because they are so durable, they can even withstand salt water. 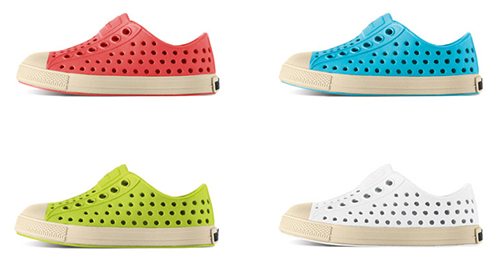 Natives ($29.95) are like the cooler cousin of Crocs— totally acceptable in New York’s trendy and fashion-conscious crowd. The Jefferson variety (my personal favorite) are rubber with Croc-like holes, but shaped like a regular sneaker.

I would love to give you an actual review of the Natives but unfortunately, I was not able to get my hands on them because they are SO POPULAR, they are sold out everywhere. I actually started my search for them over a month ago— first looking for the pink Jeffersons and then when they were sold out, trying for the red Jeffersons, then the yellow Jeffersons, then the blue Jeffersons, and then I tried to settle on the Miller variety and then I was like, okay, okay, I’ll take the Corrado… but couldn’t find any in stock anywhere, even online.

Finally, I got an email from Zappos that the pink Jeffersons were available. I went online and saw there was only ONE PAIR LEFT and bought it as quickly as I could. That was July 24th. As of today, August 10th, I have still not received Mazzy’s Natives.

I checked my Zappos order status and it says, “We’re on it!” but no shipment has been made. AWESOME. So….

Verdict on Natives footwear for kids: A big fat “I HAVE NO IDEA”

But, of course, now I want them more than anything.