Twitter Facebook Pin It Email Article
Prev The Ultimate Summer Road Trip Playlist for Families Next 3 Artists Who Inspire, “I Can Do Art”

Drawing Apps Reviewed: The Yay to the Nay

Before I get into my review, it’s important for you to understand something: My daughter is very, very talented. Yes, I know, I’m her mother and all but it’s been confirmed by MY mother who is the ultimate drawing authority. There is no reason for Grammy to be biased, is there?

At two and a half, Mazzy has become obsessed with drawing faces and while it used to be hard for me to get her to sit still, she now can sit at a table for a good five to ten minutes completely occupied with crayons and blank paper. (Then, it’s back to storming the castle and tearing up the couch).

She has also begun to develop an interest in the many drawing apps we have on my (her) iPad that previously went untouched.

Below are her three favorite iPad drawing apps, drawings that she created with these herself and my verdict, declaring whether or not I think these drawing apps are worth downloading. 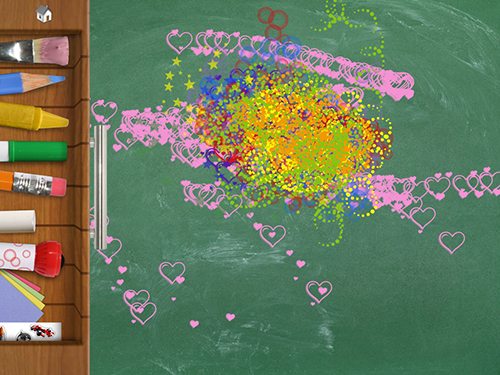 Drawing Pad ($1.99) is the most advanced iPad drawing app of the bunch. It allows you to create pictures using numerous mediums including digital paints, markers, stamps, patterns, etc. If you tap the digital paint brush, then a selection of different sized paint brushes pop up. If you touch the markers, than a selection of colors with different patterns pop up. There’s even options to change the background color and texture. And when you are finished, you can save your drawing into an album to refer back to later.

For awhile Mazzy created some of the most amazing pieces of computerized art (in my mind), but then she discovered the sticker tool. If you click the sticker, you get all sorts of options for animal stickers, car stickers, dinosaur stickers, etc. Lately, it seems that all she does is idrag random stickers into one big pile on the screen. Still, it keeps her occupied and I imagine her use of the app will continually change as she develops. 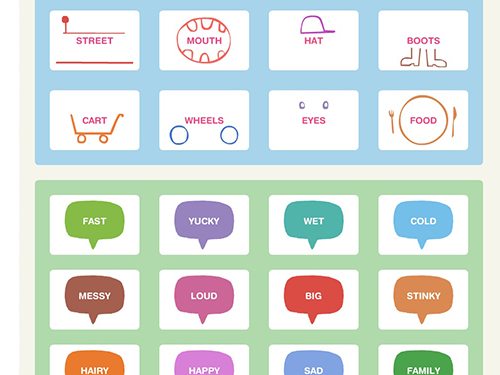 The Doodlecast for Kids drawing app ($1.99) gives your child word or picture prompts like “fast,” “cold,” or “stinky.” Or you can select a simple drawing of a mouth or a shopping cart and the app asks the user “Who’s mouth is that?” or “What’s in the cart?” to strengthen both drawing and comprehension abilities. The app records your usage as well as your voice during the drawing so you can narrate the process if you like. When your child is finished, she has the option of playing it back.

Not only did Mazzy love this drawing app, but I had great fun playing along with her. It’s one of the few iPad apps where parent interaction actually makes sense. I was totally surprised that Mazzy could determine a word to go along with each prompt— whether she could draw a good representation of it or not. For “fast,” Mazzy drew her version of a car, for “cold,” she drew a jacket and for “stinky” Mazzy drew a diaper. She even put poop in it. (See brilliant drawing below.) And she ABSOLUTELY LOVED being able to hear her own voice with playback. 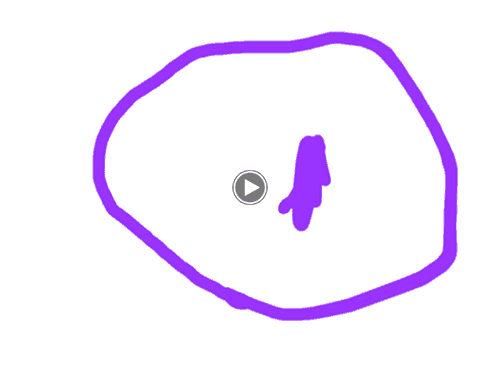 The only downside is that Doodlecast is more of a game than a drawing application. Mazzy would hear the word “wet”, then draw a circle for a “bath tub” before she was quickly onto the next. I also wish there were more prompt choices. She scrolled through them all quickly, completed each prompt and did them all over again in one sitting.

Ultimately though, I learned a lot about her drawing and comprehension by watching her play the app and she has yet to get tired of it. 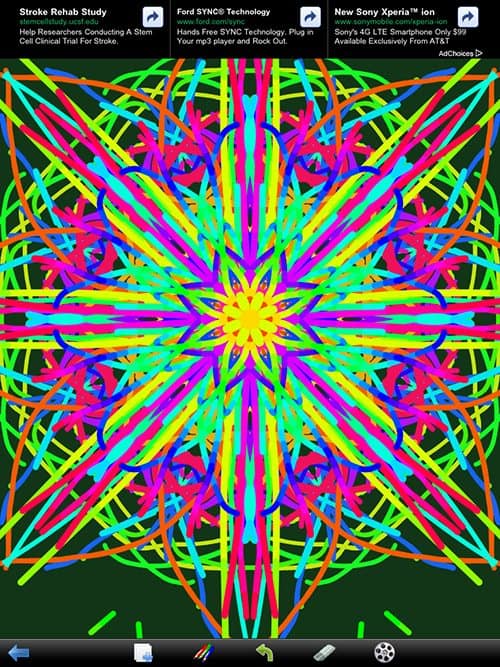 The Kaleidoscope(free) iPad drawing app lets you draw simple lines which get mirrored and repeated to create a kaleidoscope effect in various shapes. You do not have a choice of colors. Instead, with each tap on the picture, a new color is selected and applied for you at random. How much influence the color has on the overall visual, depends on the direction of your stroke and how long you keep your finger on the pad. When you are finished, you have the option of saving your creations. Plus, it’s free which means there are continually ads across the top.

Mazzy is mesmerized by this drawing app and will sit there layering color over color to create an incredibly dense kaleidoscope pattern. But watching her create pictures is a little like watching her zone out in front of the television. There is very little to no choices and drawing amounts to tapping around the screen and letting the app do the work for you. I don’t get the sense that it is enhancing her creativity. It’s just pretty to look at and easy to do.

Ultimately, the drawing apps are fun to play with and they keep Mazzy entertained for a limited amount of time. But there really is no substitution for old-fashioned crayons and a sheet of blank paper. I haven’t seen her draw anything nearly as creative on the iPad as she has been able to on paper.

I mean, really— check this out: 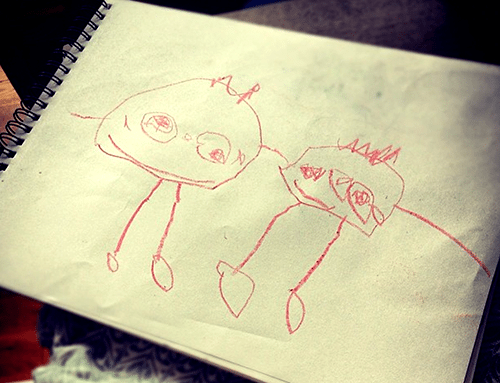