Twitter Facebook Pin It Email Article
Prev Sunscreen Guide for Kids (updated for 2016) Next The Yay to the Nay: Letter Learning Apps for Toddlers 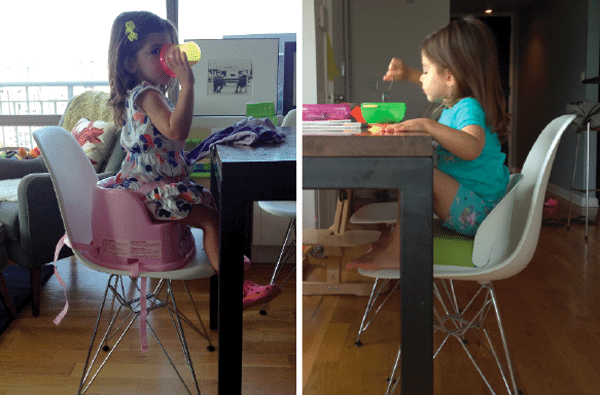 Dining Booster Seats Reviewed: The Yay to the Nay

When Mazzy turned two, she started to complain about her high chair. We responded by letting her sit in a regular chair which meant she was either on her knees or standing on the chair during meals.

In retrospect, this seems like a very bad idea if you’d like to develop good habits— like sitting still at the dinner table. Something Mazzy has never mastered. Not that she’s tried, of course.

My daughter has what medical professionals call, “Ants in the Pants” and she finds complicated tasks like “sitting in a chair” near impossible.

A few weeks ago, Mazzy saw a dining booster seat at a friend’s house and was immediately intrigued. By “intrigued” I mean that she started screaming and crying when I told her she couldn’t sit in it because the owner of said dining booster seat, a three-year-old named Ella, was currently occupying it.

That’s when I had the RADICAL idea of getting Mazzy her OWN booster seat. (It’s my first kid, sometimes I can be a bit slow.)

I looked at two options: a sleek modern OXO Seedling Youth Booster Seat ($40) that would look perfect in our dining area and a pink plastic Disney Princess Booster (update: the pictured one is no longer manufactured; we have linked to a similar one by The First Years $25) that would clash with everything.

I decided to get both and see which Mazzy liked better, since my main goal was to increase her motivation for sitting at the table.

I set them both up side-by-side while Mazzy was napping. 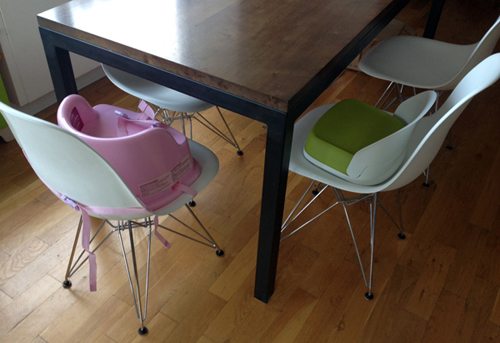 The Oxo was easy. You just flip the cushion down and place it on the seat. The bottom has rubber grips so it won’t move. It also has the added advantage of folding up so you can transport it easily to a restaurant or stick it in a closet when you are not using it. But it actually blended in so nicely with my kitchen chairs (it’s white with either an orange, green, purple or gray cushion) that I wouldn’t mind leaving it on at all times.

The Disney Princess dining booster needs to be strapped to the bottom and the back of the chair. It’s still pretty simple but once you put that thing on you are not removing it any time soon.

Mazzy woke up from her nap in a pissy mood and she was crying as I brought her out of her room. Her demeanor brightened a bit when she saw the two booster seats.

“Do you want to sit in the booster?”

“Yes,” she said through tears.

“THE PRINCESS ONE!” she sobbed.

I strapped her in and there she sat happily perched, drinking her milk for about fifteen minutes. Fifteen minutes is a long time in Mazzy’s world. Total success.

When dinnertime arrived, Mazzy asked to sit in the Disney Princess Booster again but I suggested she try out the OXO seat. She obliged.

“Squishy” she announced happily, pressing on the OXO cushion. The Disney seat is 100% plastic.

The OXO is not as high as the Disney seat, plus there are no straps so Mazzy was easily able to climb into it herself, as opposed to me having to pick her up and strap her in.

Of course, the disadvantage is that Mazzy can also climb out easily and didn’t have as high of a vantage point on the table, so she wasn’t compelled to sit quite as long as she did in the Disney Booster.

My decision was made for me at breakfast the next morning.

“Which dining booster seat do you want to sit in?”

“This one!” Mazzy pointed to the OXO. “That one is for babies!” she added pointing to the Disney booster.

I guess she figured out the thing about the straps as well. She’s a pretty smart kid.

So here’s my final assessment.

I believe Mazzy would have gone for whichever booster I had brought home if she wasn’t been given the choice. And both improved her experience sitting at the dinner table, my ultimate goal.

If you care more about keeping your kid strapped down, go for the Disney Princess Booster Seat. It comes in a Cars theme as well if your kid isn’t into the princess thing. Also, if your kid is especially small, the higher seat might work better for you. Plus there is no denying the incredibly better price.

If you want something that looks really nice at your table, has a comfier seat and is easily portable, get the OXO Seedling Youth Booster Seat. And to make yourself feel better about the higher price, think of the lower seat and lack of straps as longer longevity, an investment. Your kid will definitely outgrow the Disney seat first. (Mazzy outgrew it in less than a day.)

Officially, I am giving both boosters a YAY.

If you have a different booster seat that you highly recommend, please tell me about it below. Obviously, I can’t try everything!