The Yay to the Nay: Letter Learning Apps for Toddlers

My two-year-old has a bit of an obsession with the iPad. In order to manage her use of it, we impose time limits and also make sure to have plenty of educational apps loaded so she won’t just spend her time surfing YouTube for baking tutorials on Sesame Street themed cupcakes. (I don’t know how Mazzy discovered the whole baking tutorial video genre, but she did and she can’t get enough of it.)

There are tons of apps out there for toddlers but for the purposes of this post, I am going to focus on apps that help kids learn their alphabet and identify letters.

Mazzy has known her alphabet for quite some time and has gotten very good at letter identification. She is even beginning to say the sound of each letter. There is no way for me to know which of these apps has helped her the most educationally, so I will be judging them on the time that Mazzy dedicates to each, the frustration level involved while playing, the age appropriateness of the app and my annoyance associated with hearing it in the background. 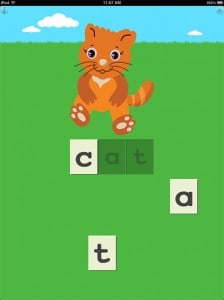 The First Words Animals app ($1.99) is a very simple game which consists of three letter words and a picture. The child must drag each letter tile (only three letter tiles are given) to the corresponding letter in the word. The app will say each letter out loud as the child drags it over and then say the word out loud when the child has spelled it correctly. Your child does not need to know how to spell to use the game but it is helpful in teaching kids that letters make up words.

Mazzy used this game when I first downloaded it but it has since fallen out of favor. There is not enough variety and the game is too easy to hold her attention. Perhaps, when she gets more interested in word formation, she will come back to it. But by then, I imagine there will be more challenging spelling games that will appeal to her. 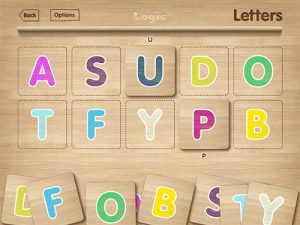 The LOGIC app ($1.99) is a simple matching game that mimics the look and feel of classic wooden tiles. Kids can choose from colors, letters, shapes, numbers and pictures to match ten tiles at a time. Soothing music plays throughout the game with chimes and the letter spoken out loud when the child matches correctly. After all ten tiles are matched, the game breaks out in a smattering of applause.

Mazzy loves this game and can play if for a long time easily alternating between the different options without getting frustrated. It is the least annoying sounding game in the world and I don’t mind listening to it in the slightest. I even love the clapping because Mazzy claps with the app— shouting “Yay!” with each successful completion. I also love the old school design juxtaposed against the high-tech iPad. So many children’s apps are like an assault on the eyes. 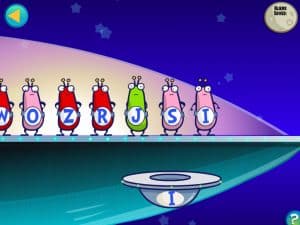 The Alien Buddies app ($1.99) has a ton of game options (including matching, puzzles and connect-the-dots) but the most popular and original game is the matching option. Under matching, you can select colors, shapes, letters or numbers. If you select letters, you are then given the option to use capitals, lowercase or a combination of both. You can also choose to either see the letters or hear them with no visual— which adds an additional challenge for older kids. The aliens are lined up on a landing station with letters on their bellies. The child’s job is to match the letter on the alien with the letter on the UFO below. When an alien is properly matched, the child is rewarded with the alien flying away and a big “Wheeeeee!!!!”

This is Mazzy’s favorite game of the bunch by far. She loves both the variety of the games and the continuing challenge. She is constantly clicking new game options to try. I love the music, the sound effects and the graphics. They are fun and do not grate on the ear. I will say, however, that if you really want your child to focus on letters, you have to be there to guide them to the appropriate place within the app. Especially if you don’t want them to get frustrated by mistakenly choosing lowercase instead of capital. 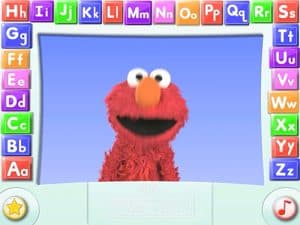 The Elmo Loves ABCs app ($4.99) has a lot going on. There are letters (both lowercase and capital) bordering the entire app which I think can be confusing for a toddler. The app has a mixture of different games and is constantly switching things up on its own without the child having to select a particular game. It also alternates between interactive play and showing relevant videos.

Mazzy simply never got into this game. Even though, at the time we downloaded it, she was obsessed with Elmo. I think she prefers to keep her video watching and her game play as two separate activities. She got frustrated easily when she was in the middle of interactive play and then the app all of a sudden expected her to sit and watch a video. I also believe the constant variation and inability to select specific game play is not advantageous to a toddler who learns mainly by repetition. Not to mention, Elmo is one ANNOYING voice to have on in the background.

Those have been my experiences with letter apps for toddlers. There are many more out there. What are some that you recommend? Would love to hear about them.