Twitter Facebook Pin It Email Article
Prev I WILL Be There When She Walks (and Other Milestone Myths I Perpetuated) Next Potty Training Wars: Boot Camp Rebellion 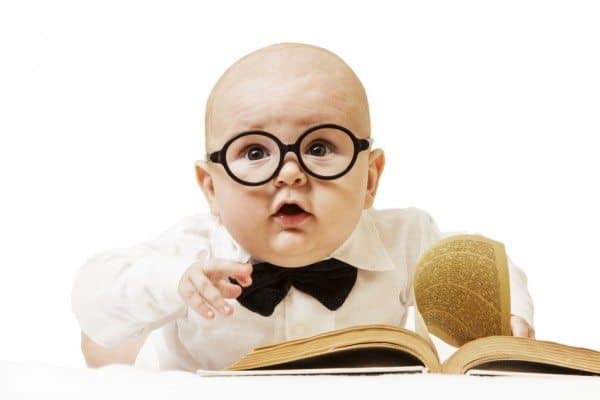 Behavior: What (and How) to “Teach” an Under-One-Year-Old

So hoping you can help. Our 11 month old is a bright, shiny thing full of beans and love. He’s pretty awesome but there are a few things that I’m starting to wonder whether we should be teaching him not to do, and how we should go about doing that. We’re by no means expecting a little robot boy, he’s a baby still and enjoying the sensation of everything. But stuff like banging on the windows or hurling his fork across the room for the 1000th time this meal, it feels like maybe we should start guiding him away from that stuff.

I guess the question is what is it appropriate to expect to be able to teach him, and how do we best go about doing that? I found your column months back when looking for why he was screeching like a pterodactyl and your great advice about there not really being any point trying to discipline an under-2, but is there a book or something you could recommend that would help us understand what’s worth teaching him at what age and how? At the moment we use a short, sharp ‘no’ if he’s going to put himself in danger to get his attention and ask him not to do other things in a normal voice. We’re not down with discipline at this age unless theres a gentle kind way to do that.

Yours in awe,
Rudderless

A super-important thing to remember around this age is that his receptive language skills far outweigh his expressive language skills. In other words, he understands more of what’s coming out of your mouth than you probably realize, even though he’s probably not talking much yet, or only using limited/basic hand gestures to communicate with you.

In other, other words, ohhhhh he knows he’s not supposed to hurl that fork. But hurling that fork (and watching Mom scurry to retrieve it like it’s a human game of fetch) is FUN.

So yes, you can (and should) start laying some groundwork on what behaviors aren’t acceptable. Not through discipline, but through your words, redirection, and some very mild cause-and-effect consequences, when appropriate. Probably what you’re already doing! When he throws the fork the first time, say something in a calm, even tone like “no thank you, we do not throw forks.” Try to make eye contact so he focuses on your face and mouth, emphasize the words with a head shake, or incorporate a hand signal if he’s not looking at your face.

(I’ve said it before and I’ll say it again and again…baby sign language is a LIFESAVER at this age, when there’s the big gap between receptive and expressive language. Not only can it cut down on tantrums and frustrations for him, it’s absolutely the coolest thing to realize you are having actual two-way conversations with your baby for the first time. It’s like they suddenly become a real person! (Who would like some milk and then put on their shoes so they can to go someplace in the car!)

(For baby sign language beginners, here’s a great starter set of signs. I also highly recommend anything and everything from Signing Time if you want to go the video or flash card route.)

The second time he throws the fork, he doesn’t get it back. “No thank you. We do not throw forks. Bye bye, fork.” Not discipline, just a consequence, and a sign that you are not going to play his game anymore.

For other stuff like banging on the windows, probably best to just gently cover his hands and redirect him somewhere else. I was big on the phrase “no thank you” with my young toddlers…just seemed easier to say in that calm, even tone AND to distinguish between things that were dangerous (when I would use a loud, sharp, urgent tone of NO or STOP) and things that were just run-of-the-mill annoying or mildly destructive. (Like, say, pulling out every last plastic sandwich bag from the economy-sized box, or coloring on things that were not paper, or oh my God stop playing in the toilet water!!!)

Now look: He’s still going to do all those things, and more, many times in the next few months and even years. He’s still going to throw the fork and see how many times you’ll fetch and return it. He’s going to test limits and see exactly how far is “too far” and what kind of fun weird new face you’ll make when he does it. You’re going to tell him not to throw his fork many, many times before the game stops being fun and he moves on. But the repetition is important, as is laying the early foundations of limits and general behavior expectations. As he experiments with cause and effect, it’s not a bad thing for him to realize that occasional certain effects aren’t fun or desirable (you throw a toy, you lose the toy, you do something dangerous you’ve been told not to do, you get hurt, etc.). It’s just life.

As for recommendations for a book or other ages-and-stages resource recommendation, I actually preferred the email newsletter thingies from BabyCenter over any of the toddler development books I purchased over the years. BabyCenter.com in general can be a heaving mass of information overload (much of which is contradictory), but I found the monthly emails cherry-picked the best/most common issues and questions for each age pretty well, especially about what to expect communication and behavior wise. It was a nice “what to expect in general right now” with some tips and guidance without subscribing to a specific parenting approach or agenda. (I still get them, actually, all these years later, one for each kid!)