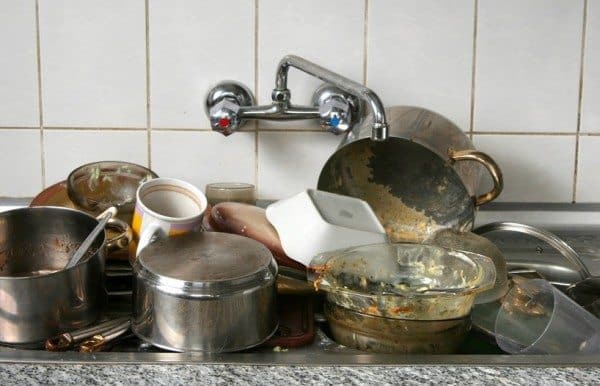 The Lament Of The “Perfect Dinner”

My home office is literally just off of the kitchen in our house, so although I’ve managed to side-step most of the other domestic temptations of working from home—I do not, for example, find myself folding laundry or dusting instead of working—I do feel a certain obligation to make my family a decent dinner almost every night. After all, I’m right here. And I like to cook. I own five crock pots! (Yes, I really own five crock pots. It’s a long story, okay?) I’m a decent cook and I try to meal plan on the weekends and most of the meals I make during the week can be adjusted to fit into my schedule. (I do try to keep the complicated stuff to the weekends.) After the kids leave for school and my husband leaves for work, I can do some prep in the morning. (If it’s a crock pot meal, that may be all I need to do.) I can take a break at lunchtime and do some prep then, if need be. Or I can just plan to knock off work early enough to do whatever cooking I’ve planned, and three seconds after I push back from my desk, I’m in the kitchen. It should be easy.

Of course, the fantasy and the reality rarely match up. I get cocky, and then life happens.

It started with the grocery trip where the giant packages of chicken thighs were on special. “Oh!” I thought, “I’ve been wanting to make jerk chicken. Those would be perfect. I could freeze half and make jerk with the other half.” Such a good plan! And so frugal of me, too! Except that when I went looking for a jerk recipe, the one I found called for five pounds of chicken, so what the heck, I decided to make the entire package and freeze some of the cooked chicken—then I’d have an easy simple-remove-and-defrost entree there in the freezer, too. Fine.

I planned to make this meal on a work day, which was my first mistake. The recipe I used had about a hundred ingredients, which should’ve been my first clue that it was better suited to the weekend. But no. I am woman, hear me roar! (Or, at least hear my blender whirring up the jerk marinade. Whatever.) Not a problem. I took a short morning break to make the marinade, chop veggies, and put the whole mess in the crock pot.

Then I left for a while to take one of my kids to a doctor’s appointment. Ahhh, the flexibility of working from home! So great! The doctor was running late that day. Surprise! Also, we were finally back in the car when I realized we hadn’t asked for a school excuse. We ran back in, waited in line, and got the magic pass to take back to school.

I deposited said child back at school, then returned to my desk to work. Just a few hours later, it was time to head back to school for a meeting, but first I had to make sure I knew what else I needed to do for dinner. The chicken would need to be finished under the broiler, so I took out a pan for that so that it’d be ready when I got home. I put some rice in the rice cooker. I planned to heat some beans to go in the rice and make a salad and fry some plantains, too. (No, I don’t know when I became Jamaican, either. I just really wanted Jamaican food for dinner.) I’d have plenty of time to do all of that after my meeting, so that I could have dinner ready pretty much as soon as the kids finished up with band rehearsal and we wouldn’t be eating super late.

Well, I bet you know what happened. The meeting ran long, band rehearsal ran long, and by the time we got home it was already after 7. I set some oil on the stove for the plantains while I fished the chicken out of the crock pot and covered it in the last of the jerk seasoning, then stuck it under the broiler. I heated the beans and checked the rice. I put the first plantain into the oil and hey, the oil was too hot, because it sprayed everywhere and the kids asked me what was going on and the dogs started trying to lick up hot oil (my dogs are cute, but not all that bright, it turns out…) while I was turning down the stove and realizing the chicken was about to burn and then I also realized that I hadn’t even started the salad and… you get the idea.

We ended up sitting down to dinner at around 7:45 (late, for us, on a school night), and while everything was delicious, I can’t tell you for sure that it outweighed the hassle leading up to it or the trail of carnage I left behind in my wake (I didn’t use every pan and utensil in the kitchen, but it was close). Later, as my husband and I were putting food away, doing dishes, and generally setting the kitchen back to rights, he said to me, “We have teenagers. Why are we cleaning up?”

“I don’t know,” I answered. I was about to say that they were busy with homework, but they weren’t. My son was gaming online with some friends and my daughter was playing a different game and texting while she did it. Probably we could’ve asked them to come clean up. Maybe we should’ve. But they’d had a long day at school and then marching band rehearsal, and this was their first free time all day, plus I suspected their version of clean and ours would be different, and I wasn’t sure it was worth the argument. Besides, I got to hang out with my husband while we tidied up and he kept telling me how great dinner was. All I’d gotten out the kids was, “This is okay, I guess,” “Do I have to eat this?” and—my personal favorite—“Why do I have to have salad? I’m having rice.” (Good news! Rice is now a vegetable, I guess!)

After dinner I had to head back to my desk and finish the work that didn’t get done during the day, thanks to the marinade, the doctor’s appointment, the meeting, picking up the kids, and wrecking the kitchen. Thank goodness everyone loved dinner so much that it was all worth it! Oh, wait. My husband and I loved dinner. Someone else who shall remain nameless for his or her own protection later said to me, “Dinner was fine, but can we just eat something normal tomorrow?”

The joke was on the kid; we had tons of leftovers for the next dinner! Hey, leftovers are “normal,” right?