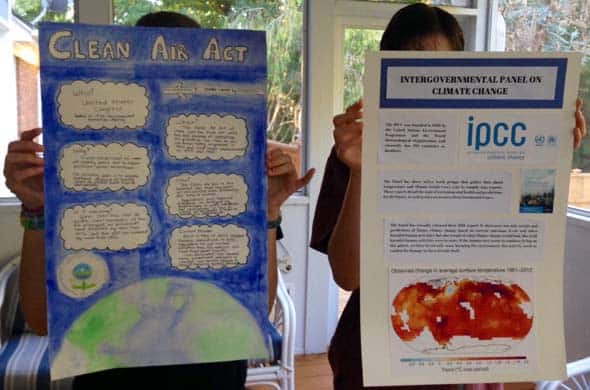 A Tale Of Two Posters

Rather: It shouldn’t be a big deal.

At the beginning of the year, I sent a friendly email to the teacher after hearing that she’d asked the kids if they were twins. “Having them in the same class won’t be a problem, but allow me to gently suggest that you don’t have them sit together or work together. You will quickly discover that they have their own individual strengths and weaknesses,” I shared. Then, I couldn’t resist adding: “Just wait. You’ll see.”

This past weekend, the kids had their first project for this class. The homework has been coming fast and furious since the first day of school, but this was the first multi-day endeavor for each of them. The assignment was to create a poster showcasing a given topic, and I thanked the powers that be that a rubric came home with the assignment, because both of my children will argue into eternity about anything that isn’t spelled out. Each had their topics and assured me that everything was under control.

Next comes the part of our program where I try to—as I like to put it—park my helicopter. My teens are in a college-level class and if they can’t put together a research poster, we have larger problems, I suppose. But… I wanted to intervene. Honestly, I was dying to intervene. Because…

… after years of homeschooling—wherein we had the luxury of skipping this sort of “busy work” I loathe—my son has no idea how to extract the information from his brain and arrange it in a visually pleasing and engaging format. Add to this the fact that he has dysgraphia, on top of being autistic (and therefore believing that anything not explicitly written in the rubric doesn’t matter), and I was biting my tongue so hard I was seeing stars.

… after years of public schooling—wherein she has learned that “fluff” does indeed sometimes garner the highest grade—my daughter proceeded to spend hours designing and painting her poster rather than working on the actual information it needed to contain. Thanks to her ADHD I knew this could quickly devolve into “but I have to get this line just right” before a single informative word was written, and a late-night meltdown was sure to occur, but hey, I was already biting my tongue, so that was good.

So for the first day, I stepped back. And holy crap that was hard.

On the second day, I allowed myself to step in with a few suggestions, ever-so-gently. I pointed out to my son that he should find some graphics he could print out, as I knew he was not interested in drawing anything, and a poster should have some visual appeal. (I was able to point to the rubric to back this up.) I also looked at the scant three sentences he’d produced and suggested he might want to flesh it out with some more information. (“But that answers all of the requirements,” he said. “Sometimes you need to try going a little further,” I replied.)

I may have mentioned the time to my daughter every so often. “You can always paint some more later,” I’d offer. “Why not get the info on there so that part’s done?” She rolled her eyes and assured me she was fine. (Guess who was up late finishing it the night before it was due? Go on, guess!)

My son grumped and argued and insisted his bare-bones first pass was “fine” and I should just leave him be. We negotiated a bit; he did a little more work; then he tried to sucker me into cutting out his printouts for him and helping him with layout. I was quick to assure him that he was perfectly capable of doing it himself, and I swear I heard some dark muttering about how I always want to tell him what to do until it gets to the part where he actually needs help. (I’m a monster, I know.)

In the end, both posters were done on time. If their teacher didn’t already realize how different they are, well, I think this may drive it home. My daughter’s poster is both pretty and painstaking, as well as being filled with information. When they have to do their accompanying oral presentations, she’ll be fine. My son’s poster is stark, in comparison, a little skimpy on actual info, and while he knows tons about his topic, I expect his oral presentation will be… awkward. I told the kids I expect she will get a high A and he will be lucky to get a B, but my daughter is convinced that “the teacher will go easy on him because he’s autistic.” I guess we’ll see what happens. I’m worried that disparate grades will lead to strife between them, too, but if one of them truly excels while the other does not, well, that’s life, sometimes. Meanwhile, after arguing about everything, my son promised that if he didn’t get the grade he wants, he’ll listen to me next time. So am I a horrible person for hoping that maybe he gets a C…?

In related news, Science Fair is coming up soon. Please hold me.