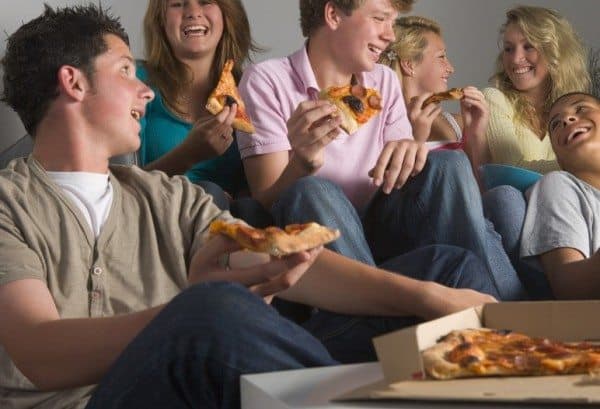 The Best of the Internet: When Your BFF’s Kids Embrace Your Own

I remember the moment when I realized it: My oldest was just four, and my youngest about two and a half, and a long-time friend was visiting with her toddler. The guest child was larger than both of my kids (despite being younger), and in the space of about two minutes had knocked down my son, clocked my daughter with a block, and dumped out multiple bins worth of toys just to hear them clatter to the floor. My friend looked up from her coffee and chuckled. “Careful, pumpkin,” she said to her son, as both of my children wailed on either side of him. (Mind you, this is the sort of thing little kids do. I don’t fault the child for his actions. This is about his mom’s reaction, or lack thereof.)

Two thoughts went through my head at her words.
1) Yes, honey, please be careful! You might hurt yourself while wrecking my house and beating up my kids!
and
2) This is the beginning of the end of this friendship.

I’m not saying it’s impossible to be friends with people who parent their children differently than the way you parent yours, I’m just saying that it was a surprise to me to realize that after years of a perfectly pleasant relationship, this felt like a fork in the road. It occurred to me that maybe we could continue being friends as long as we didn’t get the kids together, but that proved difficult; when your kids are little, everything seems to revolve around them. More importantly, I saw my friend differently, now. The friendship limped along for another year or so, but we drifted apart, and honestly I was relieved when Pumpkinzilla never darkened my doorstep again.

My days of being my children’s cruise director are long over. As teens, they choose their own friends, and half the time I never meet their parents. (Plus, a quarter of the time I maybe have to bite my tongue about my personal feelings about a kid, because it’s not for me to say.) We have the occasional situation where my kids are thrown together with someone else’s kids because of me, but it’s rare.

Nine years ago, now, I “met” a fellow divorced mom online who happened to live about 2,000 miles away. We used to stay up late, after we’d each gotten our kids into bed for the night, and use Instant Messenger to “talk” for hours. We were both starting over, in places we’d never expected to find ourselves, and it wasn’t long before we felt like we’d known each other forever. The first time we met in real life wasn’t awkward or strange at all. It was more like a reunion than a meeting. Over the years our kids have grown up—her oldest is nearly 18, which is impossible and should be illegal—and we’ve both remarried and life has thrown plenty of curveballs at both of our families. Through it all, we’ve more or less managed to get together every summer, though we missed last year because life was crazy. I’ve gone to her house and her kids readily accepted me. She’s come here and my children adore her. This year, as we schemed and planned, it turned out that my usual kid-free window wasn’t going to happen for various reasons; my son would be away, but my daughter wouldn’t. “Bring her,” my friend urged. “It’ll be great. The kids would love to meet her.”

Honestly, I felt some trepidation. Teenagers can’t be bribed with cookies to play nicely with each other. While I know my friend’s children to be amazing, and of course I am rather fond of my own offspring, my daughter can be shy and easily overwhelmed. And this all-too-rare time with my dear friend is something I guard with reverence. I didn’t want to spend the visit policing kids instead of enjoying our time together. But she assured me all would be well, and I bought the tickets.

We arrived on a Wednesday evening, and by lunchtime on Thursday it was as if they’d all grown up together. I peeked over her shoulder that morning to see a new Facebook status update that read, “Chillin with my new bonus siblings. Awesomeness.” My usually slow-to-warm-up girl was trading good-natured barbs with my friend’s two teens just as fast as they could all one-up each other, plus she was doting on the resident princess (as a preschooler and the lone girl with three brothers, the youngest rules the roost with an iron but probably pink-bedazzled fist) and treating the youngest boy with a deference his older brothers never give him. The pack of them roamed around us, laughing and scuffling and occasionally calling to us to referee.

“Mooooom! She won’t move her feet!”

“Mooooooooom! He sat on my feet!”

And then, from the oldest, “Do you two think you could be quiet? I’m trying to watch this show.” (This, of course, was greeted by a unison, “No,” from the squabbling teens in question, followed by about a half-beat of silence before all three of them burst into laughter.)

Did they sit around and talk about what it was like to have divorced parents, to spend years in a single-parent household, to watch their moms remarry, to move and start a whole new family life? Of course not. I’d be surprised if they talked about any of that. Did they say to each other, “Hey, look at how much fun our moms are having together,” or “I just love your mom, she makes my mom happy, and she’s fun to have around?” Again, of course not. But was there some sort of unspoken solidarity there, a foundation of shared understanding and connection that maybe they couldn’t articulate, but was nonetheless powerful and—dare I say it?—magical? I think so. I think of my friend as the sister I was lucky enough to discover as an adult. Neither of us was all that surprised to hear our kids referencing one another as new siblings, and when it was time for us to go, it took nearly half an hour to convince my daughter that yes, she really had to leave, and to reiterate to the boys that no, they could not get inside our luggage.

We’re home now, and life is back to normal. But my daughter is busy texting with her new pals, and my friend and I are discussing the best way to pretend we absolutely do not want my daughter marrying one her sons, so that when the time comes the kids will think it was their idea. (What?) I chose my friend and her brood as family long ago; watching our kids easily accept each other the same way was the purest joy I’ve experienced in a long while. And while I don’t know that our kids would characterize it the same way, I think they got more than they know out of it, too.