Twitter Facebook Pin It Email Article
Prev The Best of the Internet: When Your BFF’s Kids Embrace Your Own Next When Should I Let My Child Pierce Her Ears? 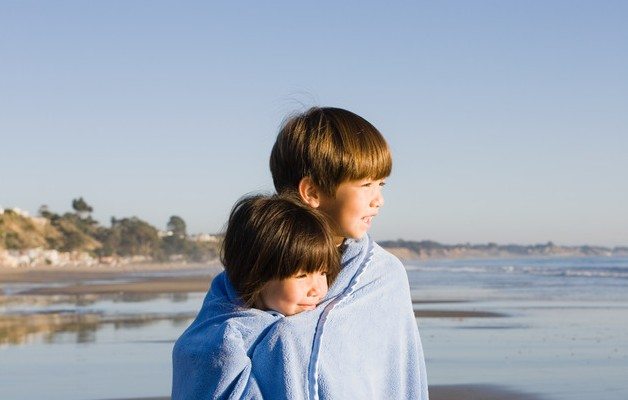 Hi Amy — I’m new to your blog but found my way to you because I also have a son (3.5yr) with a PDD NOS diagnosis. I got pregnant with my typically developing daughter (now 11 months) when I was still pretty much in denial about my son. Mind you he was diagnosed at 18 months – so yes, complete denial.

You likely know that the statistics of having an autistic sibling is at 19%. I’d love one more child but am terrified of the genetic lottery. Did these concerns ever play a factor in deciding if you were going to have multiple children? Clearly, this is a personal decision but this just isn’t a conversation I can have with my friends who have no idea the therapies, sleepless nights and overall work it takes to “manage” the life of a special needs kid.

Yes, you’re right. This is a very, VERY personal decision, and also a conversation I’ve personally seen devolve into warring, judge-y factions on more than one occasion. And frankly, some of the most passionate opinions actually came from within my circle of other special-needs parents.

Autism is not a death sentence. Autism is not The Worst Thing Ever. By insinuating that I shouldn’t have another child because “WHAT IF,” you’re implying that my existing child is somehow (at best) lesser or a burden or (at worst) a child I would not have chosen to have in the first place if I’d somehow been able to “know” before I got pregnant. Children with autism can bond with and benefit from sibling relationships just like any child. Your denial over your firstborn has passed, so if you had another child you would be prepared to be proactive and move quickly to get him/her to the necessary interventions and therapies as early as possible, thus giving you all the chance of a successful outcome. And there are no guarantees for any family out there, because EVERY pregnancy is like playing the genetic lottery.

Money. Stress. Time. Worry. Picturing your “worst” day with a difficult child and multiplying it times two…or more. Diluting your resources (money, attention, energy) away from a child who already may need all you can give. An additional burden on typical siblings, who spend significant chunks of their lives in therapists’ waiting rooms and dealing with the social issues that come from having special needs family members, plus a feeling that their struggles/accomplishments get brushed aside or overlooked — not to mention the looming possibility of being “responsible” for a low-functioning adult sibling for the rest of their lives, should something happen to you and your spouse. And of course, a feeling of guilt from purposely bringing a child into the world knowing there was a high chance that life would be harder for them, yet doing it anyway because you just wanted another baybeeeeeee.

I am not here to tell you which arguments are right and which ones are wrong. Because I really don’t think it can be broken down that easily. I think there are truths — truths that are comforting and some that are hard to hear, yet no less true — from both sides. I personally know many, many families that have decided not to have any additional children following a special needs diagnosis, and I respect that decision and would never call it fearful or paranoid. They did what was right for their family.

Meanwhile, yeah. I went and up and had not one, but TWO children after my special needs firstborn.

(Note that Noah is currently without a specific diagnosis. I’m not entirely sure he’ll ever get one, because he straddles several columns without technically hitting enough checkboxes for any of it to be considered “clinically significant.” [THANKS, DSM 5.] If someone ever comes up with a name for a kid who’s like, half Sensory Processing and part ADHD and part Asperger’s we’ll go with that, I guess. In the meantime we bill our insurance with a half-dozen individual codes that don’t necessarily add up to a single, nicely-named total sum. So our situations are not fully equal here; I have no idea what our genetic statistical chances would look like, given our hazy set of “issues.” I believe the study, you mention in your letter, focused on families that had a very clear, specific diagnosis of autism and probably excluded kids like Noah.)

I got pregnant with Ezra when I thought our biggest issue was a speech delay, which turned out to be the tip of the iceberg. I got pregnant with Ike when we were in a pretty good spot with Noah, though in our heads, the timeline for adding number three was going to be like, a year or two down the road. Whoops. Surprise! How’s eight months from now look?

Would I go back and change anything? Oh, ho ho, hell to the NO. That’s…crazy to me. Regret is something I assure you I do not have. Of course, my subsequent children are both typically developing, more or less. (I say more or less because let’s be honest, ALL kids have their quirks and unique needs. I think “typical-ish” is probably the best any of us can hope for.) But imagining life without any of my boys does not compute, would never compute. On my toughest days with Noah, his brothers are my joyful rays of sunshine, reminding me that I’m not a total screw-up. On my tough days with my younger children, I look at Noah and simply marvel at how far he’s come and how grown-up he is. On the non-tough days (and there are so, so many of those, by the way), we are just like any typical family, full of noise and glee and kids who all amaze me in their own special way.

Of course, where I am now is not always where I was, emotionally speaking. When each subsequent ultrasound revealed another boy I did have a heart-in-throat moment because as you know, the study you referenced that found the 19% statistic also found that the risk goes double for males. I spent a lot of my pregnancies and their infancies stressing about that particular set of worries. (Of course, I’m sure I could have easily found a completely different set of things to worry about. It is just My Way.) I had to fight creeping thoughts and worries about eye contact and babbling and gestures; thoughts that Something Was Wrong, Oh My God, What If It’s All Happening Again. My husband would spot Ezra lining up his cars and have to leave the room because it freaked him out.

I don’t think anyone would fault you for deciding against additional children. I also don’t think anyone should get a say in your decision to have another child, if you feel strongly that your family is not yet complete. Perhaps a conversation with a genetic counselor would help pin down your specific risk level —  the sibling risk study does underscore the idea that every family’s individual risk level is different. Perhaps just some time is in order to let you settle in and really think it over — a 3.5 year old and an 11-month old is a lot for anyone, so unless there’s a reason for urgency, maybe table the baby #3 talk for six months to a year. See where your son is then (mainstream school? crazy expensive special needs private school? free services through your district that you are satisfied with?). See what sort of progress he’s made, if the PDD-NOS diagnosis is correct or if he falls somewhere else on — or off — the Spectrum. See where you are, emotionally, financially, etc. And then listen to what your heart/gut is telling you, rather than just what some percentages on a researcher’s spreadsheet say. They might continue to disagree, and at that point you simply make your choice because you believe it’s the right one.